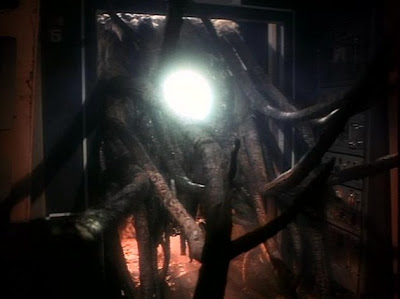 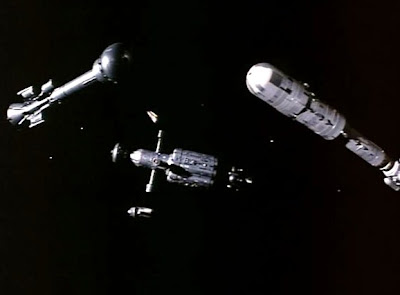 The story is told in flashback by Dr. Helena Russell (Barbara Bain), and we learn how Cellini’s ship – in 1996 -- encounters a grave yard of spaceships in orbit around the planet Ultra, and then loses his crew to a devouring, one-eyed monstrosity: a tentacled spider/dragon-type alien.
Now traveling through a different area of space all together, the isolated Moonbase Alpha encounters the same space grave yard, and the same monster…thus validating Cellini’s “crazy” story.
On first blush, this Space: 1999 episode probably doesn’t sound far different from many familiar space “monster” stories of the cinema or pulp magazines, yet the presentation and implications of “Dragon’s Domain” have captured my imagination for nearly forty years now.
In particular, I’ll never forget sitting on the sofa in my basement family room with my parents and watching on TV as the space monster -- the dragon -- wrapped his dark tentacles around helpless astronauts, male and female, and then drove them into his glowing orange maw. 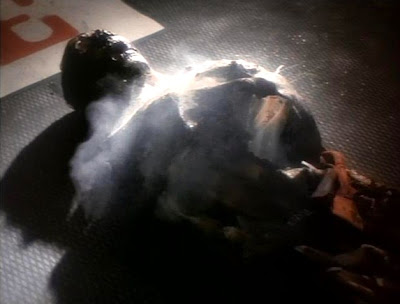 If this act of “feeding” wasn’t horrifying enough, then the very next moment surely fit the bill. The steaming skeletons of the dead were spewed out onto the spaceship deck…human flesh (and internal organs...) totally consumed.
This was my first real experience with something so…horrific. I was a huge fan, even as a child, of King Kong and Godzilla, but this kind of death was something different. It felt more personal, somehow.

The “Dragon’s Domain” monster had no noble of sympathetic qualities, and didn’t exist, seemingly, on a different scale…towering above us like a dinosaur. Instead, it was inescapable, hungry, and something that could occupy the same room as any unlucky human soul. It seemed more immediate a threat, more real, and less fanciful than the other monsters I loved, somehow.
Thus I suspect that “Dragon’s Domain” is the very story that ignited my fascination with horror films, and with the powerful idea of mixing hard sci-fi tech (like spaceships and control rooms) with something more Gothic, or perhaps even Lovecraft-ian. Before Alien (1979), Event Horizon (1997) or Pandorum (2009) caught my eye, “Dragon’s Domain” sparked my curiosity about the darkest corners of the cosmos.
What might await us out there, in the dark? 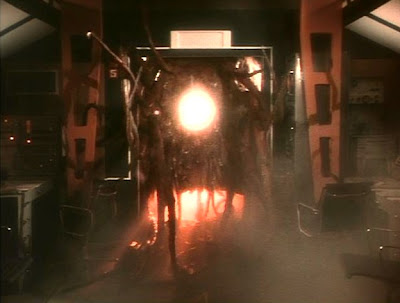 There’s something downright mythic about this tale, and even the teleplay acknowledges it, comparing Tony and his “monster” to St. George and the Dragon.
At five going on six, it probably goes without saying that I was really scared by “Dragon’s Domain.”

The “monster” didn’t register on any Alphan scanning devices, for instance, which meant that these 20th century, technological men couldn’t really determine if it was truly dead at adventure’s end, a nice Twilight Zone twist to close out the hour. This open-ended question tantalized me for weeks and months (and years and decades…).
Could something exist out there in space that is so different from us that it doesn’t even register on our equipment?  That lives and dies by physical laws we can’t comprehend?
Even more intriguingly, the episode concerned that space grave yard. Once more, there were a hundred untold stories there; stories of space-farers who had come to that unpleasant and inexplicable end.  But where had they traveled from?  Who were they?  We might even ask the same questions of Ultra.

Was the monster from that world, or did the grave yard appear in orbit by coincidence?  What was the surface of that planet like?  Who lived there?  Had they too, been devoured by the dragon?
And speaking of coincidence, how could the space grave yard travel from Ultra to Alpha’s position between galaxies? Was the monster somehow guiding its “web” to…follow Tony?

All these unanswered questions swirled in my mind, and my response at the time was to “make pretend” further 1999 adventures (with my Mattel Eagle…) that addressed some of these points.
It was this impulse to understand and continue the story that I credit with my decision, finally, to become a writer. 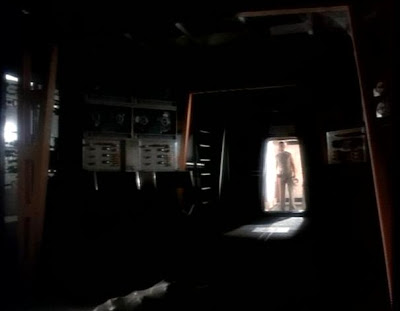 But as a kid, I wanted more; more stories that were open-ended, that offered hints -- but not clear-cut answers -- about the universe  This is the very thing that continues to draw me to Space: 1999, and to works of art like Ridley Scott’s Prometheus (2012).
In works such as these, there’s the tantalizing opportunity to go deep, to explore possibilities and ideas not spelled out or spoon-fed.  I don't consider a lack of explanation cause for nitpicking as so many fans do.

The idea of this kind of exploration hooked me at age five, and has kept a hold of me -- like a dragon’s tentacle -- ever since.
at September 13, 2022