Stardate: 3478.2
The Enterprise visits Gamma Hydra IV, a planet near the Romulan neutral zone that recently came in close contact with a rogue comet.
There, a landing party consisting of Captain Kirk (William Shatner), Mr. Spock (Leonard Nimoy), Dr. McCoy (DeForest Kelley), Mr. Scott (James Doohan), Mr. Chekov (Walter Koenig) and Lt. Galway (Beerly Washburn find that scientists Robert (Felix Locher) and Elaine (Laura Wood) have inexplicably aged years -- even decades -- in less than a day. Another of their team has already died. Chekov is terrified when stumbling upon his corpse.
Aboard the Enterprise, the landing party members -- except for Chekov -- begins to show signs of the same mysterious malady they witnessed on the planet. They begin to age rapidly.
Commodore Stocker (Charles Drake), bound for a command at Starbase 10, wants Spock to convene a hearing that will judge Captain Kirk incompetent, and see him relieved of duty.  Spock reluctantly agrees, and the inexperienced Commodore takes command of the Enterprise.
Meanwhile, Kirk’s old flame, Dr. Janet Wallace (Sarah Marshall) works with Dr. McCoy to come up with an antidote to the aging illness.
While they struggle to find an answer, Stocker directs the Enterprise through the Romulan neutral zone, believing a direct course to Starbase 10 is necessary.  The Romulans, however, intercept the starship. 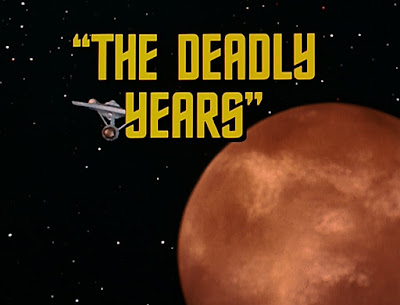 “The Deadly Years” is another classic episode of the original Star Trek (1966-1969), and one of the best installments of the second season.  The story is affecting, exciting and buttressed by great make-up effects.
One reason “The Deadly Years” works so well is that the theme of the episode, aging, is universal to the human experience.
We are all going to grow old, and face diminished possibilities in terms of our mental and physical acuity.  As we age, we grow weaker.  For some of us, it will be worse than that, and we will deal with age-related problems such as hearing loss, arthritis, and even dementia.  Old age is, frankly, a terrifying and implacable nemesis. 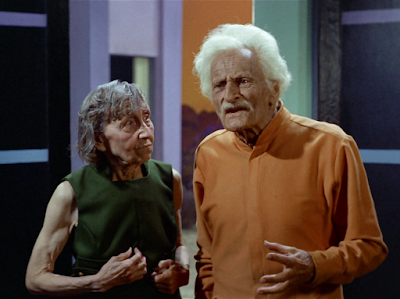 The universal nature of aging -- we will all experience it, without fail -- is not the only reason that “The Deadly Years” is so effective.  Before we face this particular enemy ourselves, we will watch it take the ones we love, too.  In the passage of the generations, we see our once-strong parents begin to weaken, grow less independent, and less able.
Here, we see the young and vital Captain Kirk transformed into a frail, forgetful, belligerent old man. There is something incredibly sad and upsetting about seeing a strong person rendered weak before our very eyes.  Kirk is a force of nature, a man of high energy. But even he is not exempt from the ravages of age.
The episode is powerful too, in part, because of Sulu’s (George Takei) and Uhura’s (Nichelle Nichols) reaction to Kirk’s aging, as he gives them orders that require questioning. Kirk repeats himself (about planetary orbit), and orders a signal sent using a code that the Romulans have already deciphered.  In one pitiful moment, he is seen asleep in his command chair on the bridge.  It is clear that Sulu and Uhura don’t want to question or harm Kirk, a man they deeply respect, and at his hearing they make excuses for his behavior. 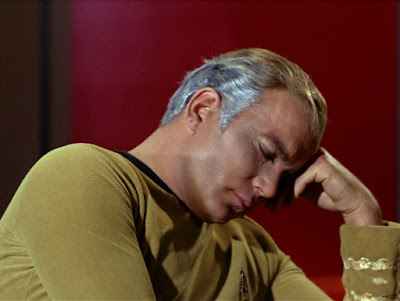 But you can see it in their eyes how it much it hurts them to have to question him and his competence.
One aspect of “The Deadly Years,” I never fully appreciated in my younger days was the unusual nature of the romantic relationship between Kirk and Wallace. It’s a little kinky, in a sense.  She only is attracted to Kirk as he grows old and less capable. She comes on to Kirk as he super-ages, and he realizes that this is her pattern of relationships with the opposite sex; to find herself attracted to older men. Perhaps because then any real commitment is time-limited. 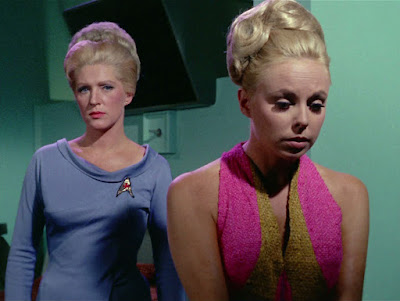 It is also bittersweet to experience “The Deadly Years” in 2016, fifty years later, and reckon that the majority of the cast that grew old so colorfully (and with extensive, effective make-up) for this episode, have indeed died in their old age.
We have lost De Forest Kelley, James Doohan and Leonard Nimoy.  It’s impossible not to think of that fact as these beloved actors “age” here in character. 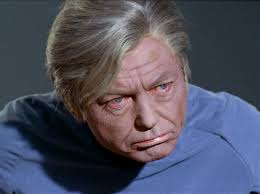 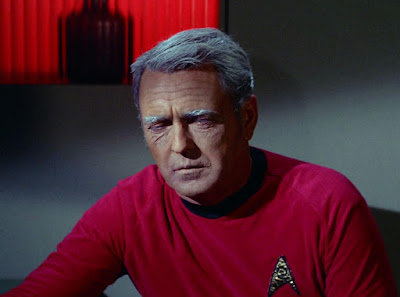 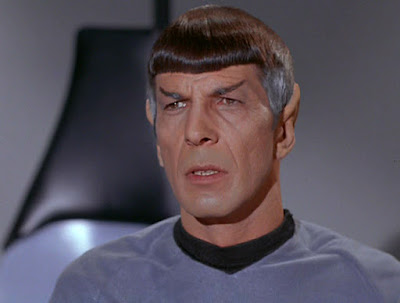 Although “The Deadly Years” ultimately sees our beloved characters restored to youthful vigor, in real life there is simply no antidote to old age, to creeping mortality.  As a forty-six (soon to be forty-seven) year old I am more conscious than ever that time only moves in one direction, and that aging is an irrevocable, diminishing process.  We may, hopefully, age gracefully.  But, regardless, the aging process occurs.
Part of that process of aging, I understand at almost 503, is failing to recognize one’s own limitations. It is especially appropriate that the impulsive, energetic Kirk would face this particular problem. He can’t let go of his command, and cannot see how his failing faculties are impacting the crew and the ship.  And he feels such intense betrayal and pain when Spock, under Stocker’s direction, must point out that he has lost the capacity to command a starship. Et tu, Spock? 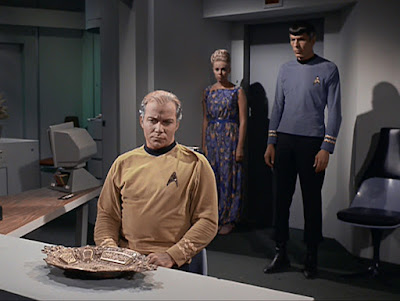 The moments between an aged Kirk and Spock in “The Deadly Years” are especially heart-breaking.  Spock has performed his duty, as he must.  Kirk can’t see it that way, and turns against his old friend.
“The Deadly Years” is also a strong installment in terms of series continuity.  This is the first episode to feature the Romulans since the early first year segment “Balance of Terror.” It is also their only appearance in Star Trek’s second season. The Romulans appear in their painted bird of prey vessels, seen in that episode, and again fire their plasma-based energy weapons.
Significantly, Kirk’s resolution to the Romulan confrontation harks back to another early first season episode of Star Trek. He re-uses the Corbomite gambit he tricked Balok with in “The Corbomite Maneuver.”   Again, it works.
One might also make the argument that “The Deadly Years” is an influential episode of Star Trek because Dr. Kate Pulaski (Diana Muldaur) suffers a similar super-aging malady in the second season Star Trek: The Next Generation (1987-1994) episode “Unnatural Selection.”
at September 07, 2022