Stardate: 5423.4
The Enterprise engages in negotiations with the planet Gideon, whose government has “consistently refused” delegations and even surveillance scans. The government reports, however, a world of paradise-like conditions.
Now, led by Ambassador Hodin (David Hurst), the government agrees to a diplomatic delegation of one: Captain James T. Kirk (William Shatner).
After beaming down from the Enterprise, however, something goes wrong. Kirk fails to materialize in the Gideon council chambers.
The xenophobic Gideon leaders blame the Enterprise’s technology, and refuse permission for a search party to look for the missing Captain. In temporary command, Mr. Spock (Leonard Nimoy) petitions Starfleet Command for permission to beam down anyway and conduct a search, but Admiral Fitzgerald (Richard Derr) refuses.
Meanwhile, Captain Kirk mysteriously finds himself aboard an almost entirely empty Enterprise. He soon discovers there is one other person aboard, the beautiful amnesiac, Odona (Sharon Acker).
While the Enterprise searches for Captain Kirk, the captain learns the truth of life on Gideon.
The planet is extremely over-populated, and he has been brought there to infect Odona with a disease he once carried, so that the population problem can be ameliorated.= through contamination. 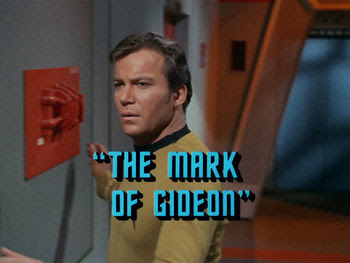 “The Mark of Gideon” is a fascinating and intriguing episode of Star Trek (1966-1969), though one that contends with some problems in logic and consistency. The tale is significant, in terms of social commentary, since it concerns an issue that was debated greatly at the time, and is still of concern today: overpopulation.
Some context: Author Paul R. Erlich had an unexpected best seller in 1968 with his book The Population Bomb. The title sold over two million copies, and suggested that if the population continued to grow at the same rate, mass starvation and country-wide die-outs would be commonplace events in the 70’s and 80’s.
The book was a touchstone of the turbulent era, though both sides of the political spectrum rejected the author’s suppositions about what the future would hold. Many critics called the book “alarmist” and derided its “predictions.”
“The Mark of Gideon,” by Stanley Adams and George F. Slavin sets the very problem -- overpopulation -- forecast in The Population Bomb on a distant planet, Gideon.
As described by Hodin, the people there “are incapable of destroying or interfering with the creation of that which we love so deeply: life, in every from; from fetus to developed being. It is against our tradition, against our very nature.” 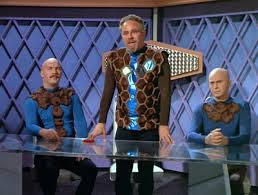 In other words, he lives in what appears to be a militantly pro-life culture, since birth control is not even permitted on Gideon. Kirk recommends sterilization or contraception to Hodin to re-mediate the problem, and these planning tools are swatted away as incompatible with the Gideon love of life.
This is intriguing for a few reasons.
First, the stance is hypocritical, and this truth reflects real life here on Earth.. Kirk notes that Hodin has no problem killing “a young girl,” meaning Odona. She will be contaminated with a plague that she will then transmit to others, killing, perhaps, millions. This social engineering is interfering with the creation of life, since she will never marry, never create life, never see generations of progeny.
Yet, importantly, we see this brand of contradiction every day, in real life.
There are factions of the modern pro-life movement who want to make certain that every fetus gets a chance to be born, but then vote for war (in which  people are killed in huge numbers…), or they vote for the application of the death penalty, which ends life, and the possibility of future life too. 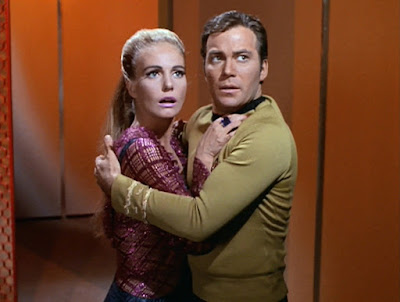 Similarly, this faction of the movement might more aptly be termed "pro-birth," because once the fetus is delivered, they don’t want to fund education, health care, or any other support for the individual they demanded be born.  They see life as incredibly important, but not quality of life.
“The Mark of Gideon” perfectly captures the inherent contradictions of this position. The Gideonites are pro-birth, but not pro-life, since they are willing to kill to remake their paradise. What will be the quality of life for their people as they succumb to infection?
In terms of the episode, however, all this social commentary basically comes down to one fascinating (and very well-shot scene) between Kirk and Hodin in the council chambers.
At times, we are looking through a glass table, up at Kirk, as though we are literally through the looking-glass on Gideon. The self-righteous Hodin explains how he loves all life. But look at his actions, and see how they go against his words: He has abducted Kirk, his people have wounded Kirk’s arm, and he has engineered a pogrom of disease to wipe out his people’s virtual immortality.
The problems with consistency and logic in "Mark of Gideon" arise from the “honey trap” Hodin springs on Kirk, placing Odona and the good captain on a complete-to-the-last-detail, life-sized replica of the starship Enterprise.
The replica is so perfect in every detail, in fact, that Kirk can’t distinguish it from the real thing.  Let’s ignore the fact that a replica of the Enterprise would take up a lot of space on an overpopulated planet for the moment, and just focus on what the replica means, or represents.
If the people of Gideon can build such a perfect replica of the Enterprise, why not build spaceships and populate other worlds, thus ameliorating their overpopulation problem?
They could colonize their star system, and beyond. If this is a non-functional model of the Enterprise, why not use similar technology to build space stations, in orbit, again ameliorating (at least in the short term), the overpopulation crisis?
Colonization, or orbit-bound facilities, are not in any way an “interference” with the process of life, and would actually bring significant relief to Gideon. I know the episode states that the people of Gideon are xenophobes. They could go right on being xenophobes, on colonies, or space stations.
The whole idea of a duplicate Enterprise on a world of such limited space/room is pretty far-fetched. If only TOS had holo-technology, because this error could be remedied by noting that the duplicate is just a holodeck, not a full-sized starship.
Still, Fred Freiberger must have liked the (bad) idea of a duplicate HQ so much that he imported it to his work on Space: 1999 (1975-1977). In the Year Two episode, “One Moment of Humanity,” androids send Dr. Russell (Barbara Bain) and Security Officer Verdeschi (Tony Anholt) to a fully-functioning, complete-to-the-last detail replica of Moonbase Alpha.
The idea doesn’t work any better in that story than the duplicate Enterprise works in “The Mark of Gideon.”
Still -- and this is one crucial reason I love Star Trek so much -- “The Mark of Gideon” is about something important, and about something timely.
Still, too much energy is spent on the mystery of the empty/duplicate ship, rather than on the Gideonites’ hypocritical belief system.
However, the mystery of Gideon possesses has some terrifying moments. The shots of the Gideon people, outside the ship, pressing against windows or view ports, are eerie and disturbing, and an additional example of Star Trek's visual ingenuity. 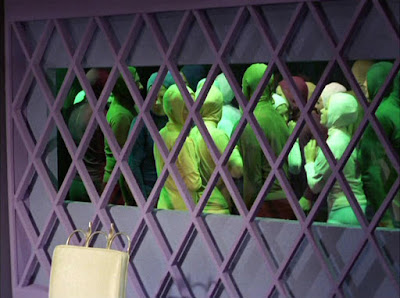 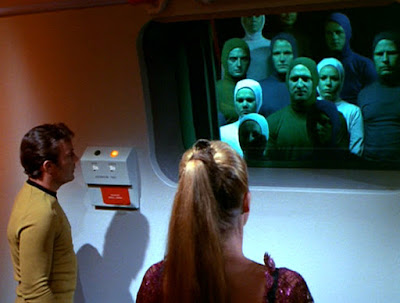 Also, the Enterprise screen seems to function as a window in this episode (as it does in "Requiem for Methulesah,") which exposes the lie of some, who say that view screens were never windows in the original series prime universe. 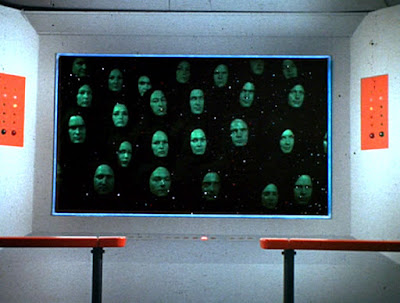 One final note. Mr. Spock shows considerable disdain for diplomats in this episode, as has often been the case in Star Trek (see: “The Galileo 7,” and “A Taste of Armageddon.”)
By Star Trek VI: The Undiscovered Country (1991), he is a diplomat!
at September 09, 2022