Star Trek Week: "The Enemy Within"

Stardate: 1672.1
The U.S.S. Enterprise crew conducts a “specimen gathering mission” on the surface of planet Alfa 177. The inhospitable planet turns deadly at night, when the temperature drops to “120 below zero.”
A crewman, Fisher, beams up to the Enterprise after taking a fall. Unfortunately, the technician’s uniform is contaminated with a strange metallic ore, and the ore damages the ship’s transporter.
When Captain Kirk (William Shatner) beams up to the ship, the damaged device splits him into two individuals. One is savage and avaricious. The other is weak and diffident. The violent, “dark” Captain Kirk assaults Yeoman Janice Rand (Grace Lee Whitney) and demands Saurian brandy from Bones (De Forest Kelley), while the other must cope with his dwindling ability to command a starship.
Meanwhile, Mr. Sulu (George Takei) and his landing party on Alfa 177 must remain the night on the frozen world, pending the repair of the transporter.
While Kirk is disgusted by the sight and thought of a vicious, barbaric double, Mr. Spock sees an opportunity for study, to understand the qualities that make a person a great commander… 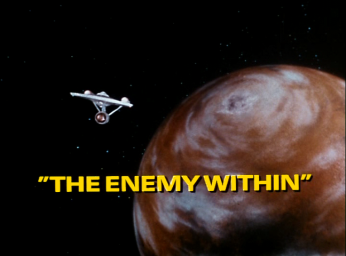 Penned by the great Richard Matheson (1926-2013), “The Enemy Within” is a classic episode of Star Trek (1966-1969). Matheson’s teleplay examines -- through the use of a transporter malfunction -- the dual nature of humanity.
Inspired in art by the story of Dr. Jekyll and Mr. Hyde, Matheson has penned a story about Captain Kirk which reminds the audience that strength, leadership, decisiveness, even, may stem from a negative or dark part of the psyche. This is a powerful revelation, and Kirk’s final, sad musing that he has “seen a part of” himself “that no man should ever see” is powerful, even haunting.
“The Enemy Within” has for a long time been esteemed as a great episode of Star Trek, but I wonder, after my recent viewing, if it hasn’t aged poorly to some degree. 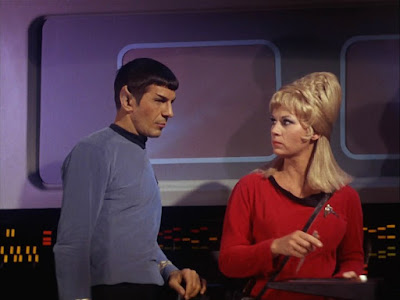 For example, Spock’s joke to Yeoman Rand at the end of the episode (about the evil, assaulting Kirk having some interesting qualities) is in bad taste and insensitive. What a terrible thing to say to someone who has suffered an assault from someone she cares for. Knowing what Whitney suffered on the set of Star Trek makes the remark even worse.
Furthermore, the last act is drawn out, with the two Kirks being forced to embrace each other at great length, and with great emotionality.
Much worse, in my estimation, “The Enemy Within” is an absolute mess from a visual standpoint. The editing is sloppy in some crucial instances.
For example, early in the episode, Kirk’s uniform is missing an insignia. In the very next scene, it has returned to its proper placement.
And in the episode's final confrontation, the bridge’s view-screen is a big white board…with no image projected upon it in post-production. This really sticks out. It’s not like we’ve ever seen the screen in “off” mode before.
Then, of course, there are all the compositions that have been printed in reverse, meaning that haircuts are parted on the wrong side and insignias appear placed the wrong side.
In toto, this is a sloppy episode of Star Trek from a visual standpoint, and the mistakes are jarring, repetitive, and frequent. The alien dog with the antennae and electronic bark is also one of the sillier aliens to make an appearance on the program. 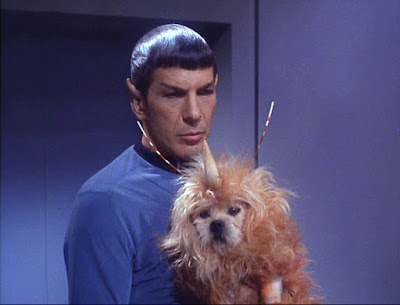 If I were William Shatner, I would certainly have cause for complaint about the production values, editing, and shooting of this story.
After all, he delivers not one but two phenomenal performances in this episode, and his efforts are under-cut frequently by the pervasive mistakes.When he takes center stage, however, Shatner is indeed a commanding presence. His “dark” Kirk is a ferocious, feral presence. 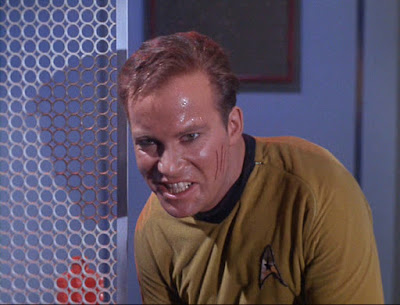 Even the threat of the week -- crew members trapped on a frozen planet -- doesn’t hold up well today because in 2022 we all know that the Enterprise houses shuttle crafts.  They should be used to rescue Sulu and his cohorts, but of course, in terms of production, a shuttle didn’t yet exist, either practically or in the imagination of the writers and producers.
But looking back, it’s a glaring omission, and adds to the sense that the episode is sloppy, or ill-considered. 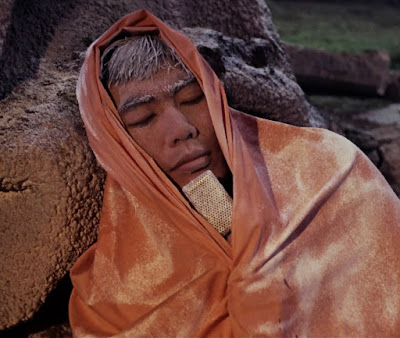 The qualities that make “The Enemy Within” stand out involve the clever observations about human nature, particularly from Spock.
Although I believe it is a mistake that he would note his “alien” rather than Vulcan half, specifically, his point is nonetheless well-taken. He has two sides fighting a war inside of him, every single day.
But Spock’s observation that what makes a man a leader is “his negative side,” properly controlled, is unforgettable. That’s a pretty daring observation for a young TV show, and one in the mainstream.
It says, essentially, we derive or power and strength from dark or negative impulses. We aren’t altruistic beings. We don’t seek power for noble reasons. But, if even tempered, we can still do good things with that power.
In terms of overall structure -- as I wrote about in regards to “Where No Man Has Gone Before” -- it is good to have McCoy arguing the other side of the debate. He doesn’t see a dark side or a negative side here. “It’s not really ugly, it’s human,” he says, and that’s a good point too.
“The Enemy Within” is an important episode to Star Trek not merely for its dissection of Kirk’s leadership, but because it gives us a number of important series firsts.
This is the first episode in which Spock uses the famous Vulcan nerve pinch. It is also the first time we hear McCoy say his immortal line, “He’s dead Jim.”
We saw some of Engineering in “The Naked Time,” but this is the first episode that features an extended sequence set there, if memory serves. 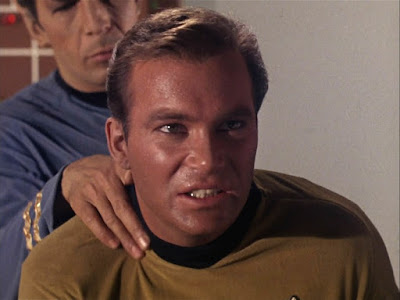 I’ve always loved and admired “The Enemy Within,” but this time, while I watched, I wondered if time had finally passed it by. There is a legitimately great episode of Voyager (1995-2001), for example, called “Tuvix,” wherein Captain Janeway (Kate Mulgrew) must examine the moral case for separating two life forms who have been blended by transporter (Tuvok and Nuvix).
That episode works on a stronger, more advanced philosophical level, and has fewer unforced visual errors.
Of course, at the same time, I’ll be the first to admit that “Tuvix” couldn’t exist had “The Enemy Within” not arrived first.
For me, the reason to watch this episode remains William Shatner’s gonzo, totally-committed performance. Also, I love the Rand/Kirk scenes.  That is a fascinating relationship that I wished had been given the opportunity to develop more fully.
at September 05, 2022