Stardate 1512.2
On the third day of a star mapping mission in previously uncharted space, The U.S.S. Enterprise is blocked by a cube: a border marker, apparently, left behind by some unknown alien race.
Captain Kirk (William Shatner) is forced to destroy the cube when it emits dangerous levels of radiation and threatens the lives of his crew and the safety of the ship.
Before long, however, the powerful force behind that cube arrives to confront the Enterprise. Commanded by the fearsome Balok (Ted Cassidy) is a colossal vessel -- the Fesarius – hailing from a society called The First Federation.
Balok threatens to destroy the Enterprise for trespassing in restricted space. No escape is possible. No plea is acceptable, he says.
On the bridge of the Enterprise, Balok’s uncompromising behavior rattles the nerves of a young navigator, Bailey (Anthony Call), and stymies Kirk’s attempts at diplomacy. There seems to be no way to escape destruction, at least until Mr. Spock (Leonard Nimoy) off-handedly mentions chess.
Inspired, Kirk realizes he is playing the wrong game with this opponent. He adopts a different game -- poker -- and then, with the straightest of poker faces, attempts to bluff Balok.
This ploy succeeds, and opens up a channel of communication between the Enterprise an Balok. 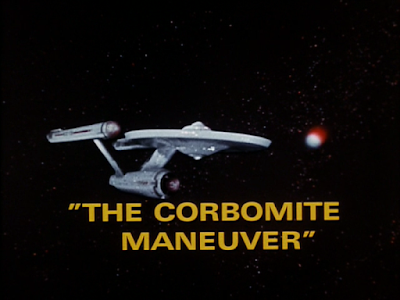 If I had to select one episode to represent the totality of the Star Trek (1966-1969) experience, I would pick “The Corbomite Maneuver.”
Without a doubt, this is one of the greatest episodes of the series -- one of the ten best -- and an installment that delivers drama, suspense, and most importantly, a distinctive and uplifting philosophical world view. 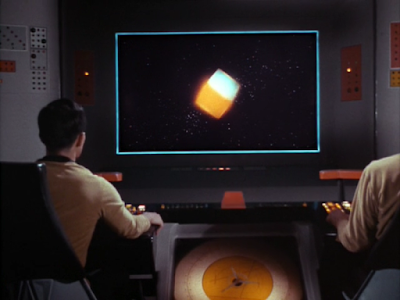 First of all, “The Corbomite Maneuver” presents the idea that the greatest enemy in space is not alien races, but fear itself.  In other words, human psychology. The problem is how we respond to that which we don't fully comprehend or know.
“The greatest danger facing us is ourselves,” Kirk announces to the crew in this episode. He then discusses “an irrational fear of the unknown,” and notes that there is actually no such thing as the unknown, rather merely “things temporarily hidden, temporarily not understood.”
This is a remarkable monologue, and a perfect distillation of Star Trek philosophy.
The men and women of the 23rd century and aboard the Enterprise are equipped to handle new frontiers, new civilizations. And what is unknown or seems different, in due time, becomes understood, explainable. They are explorers who -- if they can conquer their own demons -- are ready to meet the universe.
This is a great affirmation of mankind, and our potential. Star Trek shows us who we can aspire to be, if we put anger and fear behind us.
Kirk’s assertion of this philosophy is developed in the episode on an individual basis too; by Bailey, the young navigator who finds it difficult to control his fear, his emotions when Balok threatens the Enterprise. 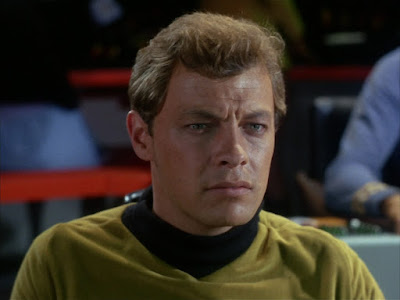 Bailey is young, and inexperienced, and unlike the senior crew has not yet learned how to manage his fear. He is well-trained, responsible, and capable...but personally, he grapples with the unknown.
At the end of the episode, Kirk notes that he “owes” Bailey a look at “the face of the unknown” and it’s a remarkable moment. Kirk has taken him under his wing, and shows Bailey that as captain he does not just mouth a philosophy of exploration, peace and understanding…he practices it. He lives it.
In my opinion, this quality is what makes Kirk (and certainly Kirk of the first season) an extraordinary captain and role model. 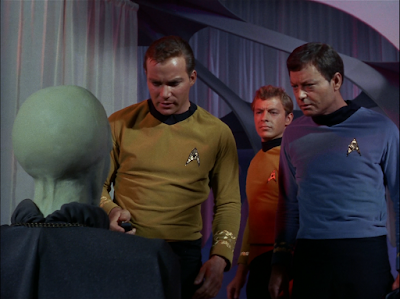 The very idea of fear is reinforced in the episode through the character of Balok as well.
He has constructed a menacing puppet (replete with menacing voice…) as his “alter ego.” This is the face he shows the world...the universe. 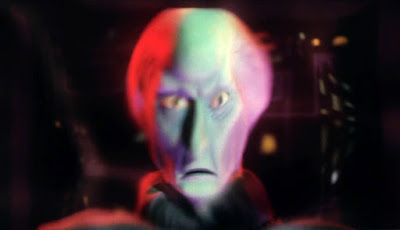 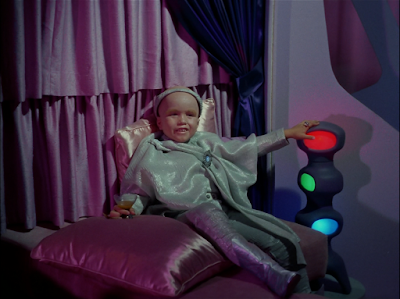 The first episode of Star Trek filmed following the second pilot, “The Corbomite Maneuver” also establishes a long-lived Kirk/Spock character dynamic. Specifically, Spock makes an observation or analysis about a current situation or dilemma, and that remark inspires Kirk to concoct a brilliant, but spontaneous strategy for success.
Here, Spock is reminded of chess, noting that Kirk and Balok keep making effective counter-moves.  That notation gives Kirk the inspiration of a different game, poker…and bluffing.
As late as The Wrath of Khan (1982), and Spock’s observation of Khan’s “pattern” indicating “two dimensional thinking,” we see this character dynamic re-asserted. Spock observe and assesses; Kirk synthesizes that work into purposeful, life-saving action. One man is all about knowledge and information. The other man is all about improvising survival from that analysis. 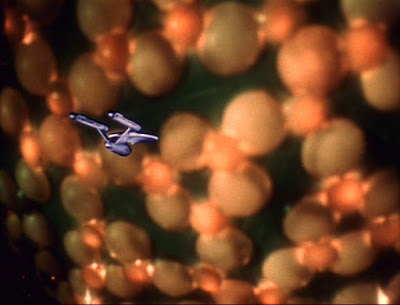 There are so many grounds upon which one can commend “The Corbomite Maneuver.” It is excellent entertainment, first off, with a surprising ending.
More trenchantly -- and like other early episodes of the series (namely “The Man Trap,” “Charlie X” and “The Naked Time,”)  -- this episode creates the impression of real people functioning on a real vessel.
I termed this the “the lower decks” paradigm in my reviews of those episodes. Here, for instance, we see Yeoman Rand bringing Kirk dinner (while he gripes about a diet), and meet a young surrogate for the audience: Bailey.
Bailey, like the audience, doesn’t quite know the ropes. This episode is his journey. In a way, he is really the central character of this work of art. No, he’s not a captain, a CMO or exec.  He’s just a kid promoted to a job of great responsibility. But importantly, he is a individual who has no practical way of grappling with his fear. When Kirk mentors him, he is really mentoring us too.
I also find this episode exceptionally tense, and, indeed, a template, perhaps, for many of the most challenging an remarkable episodes of Star Trek.
Much time is spent on the bridge, as strategy is discussed and executed, and there are no planets to visit. 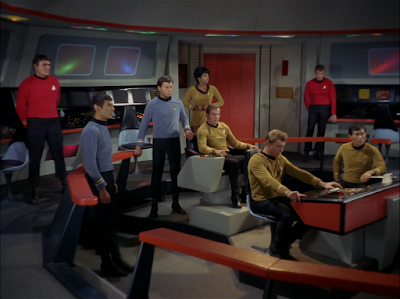 Think about how much Star Trek: The Motion Picture (1979) resembles this story type. The crew --from their workaday control room -- grapples with alien contact. In the midst of an emergency, the crew must face their fear of the unknown, and puzzle out the rationale behind an intelligence beyond human experience.
And of course, the answer in both cases is not violence. It is not hostility. It is not to kill that which is different.
Instead, an episode such as “The Corbomite Maneuver” suggests that we can control all those impulses and meet the unknown with the best angels of our nature. Bailey sees the face of the unknown, and fear disappears.
Put aside your fear, says Star Trek, and that which is dark and mysterious, becomes illuminated and known.
at September 05, 2022