Stardate 4211.4
The Enterprise visits the planet Neural, a primitive world where the Prime Directive is in full effect.
This is Captain Kirk’s (William Shatner) second visit to the paradise-like planet. Years earlier, he befriended one of the peaceful natives, Tyree (Michael Witney) of the Hill People. Now Tyree is the leader of his tribe, and married to a local witch-woman, a Kahnutu Woman named Nona (Nancy Kovak).
But there is a snake in the garden. Mr. Spock (Leonard Nimoy) is badly wounded by an armed member of an opposing tribe.  These villagers possess flintlock rifles, which are generations beyond the planet’s current stage of development.
His life in jeopardy, Spock is operated on by Dr. M’Benga (Booker Bradshaw) aboard the Enterprise, and Nurse Chapel (Majel Barrett) watches closely over his recovery, accommodating for some unusual Vulcan characteristics.
On the planet’s surface, meanwhile, Kirk and Bones (De Forest Kelley) must investigate the very real possibility that the Klingon agents are interfering in the planet's development by arming the villagers, creating an imbalance of power.
Kirk, after recovering from a Mugato bite and being cured by the ambitious Nona, must decide how he should intervene to help Tyree’s people, and weigh the cost of that intervention. 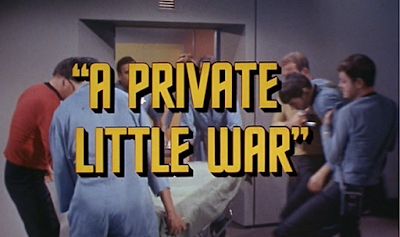 In space, all warriors are cold warriors.
That’s a line, of course, from Star Trek VI: The Undiscovered Country (1991). But it also applies to this highly underrated episode of the original series.
“A Private Little War” finds two superpowers waging war, by proxy, on an undeveloped, or “third world,” planet, Neural.  The Klingons are a stand-in for the Soviet Union, and The United Federation of Planets, represents the United States. Neural is, of course, Vietnam.
The issues that Kirk and McCoy hash over here are the very issues that divided our nation when Star Trek originally aired. Delightfully and quite commendably, those issues are debated in a meaningful way in "A Private Little War," without resorting to straw man arguments, or easy answers.  Each side is given a voice (via the words of Kirk, or McCoy), and that voice resonates. 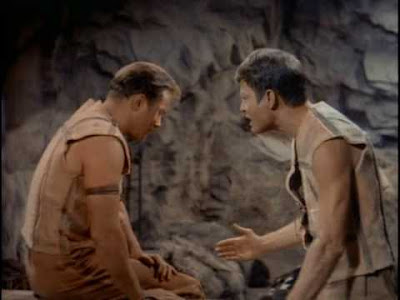 “A Private Little War” isn’t often named in the top tier of Trek episodes, but it reaches that zenith, at least as far as I’m concerned. The episode offers a compelling narrative in the Trek universe and at the same time the story tells us something important about the world that we live in. Famously, the episode features a direct reference to the Vietnam War, and validates the U.S.’s involvement in it.
Specifically, Kirk asks McCoy if he remembers "the twentieth century brush wars on the Asian continent." He further describes the conflict: "Two giant powers involved, much like the Klingons and ourselves. Neither side felt that they could pull out."
And McCoy remembers, pertinently, the cost in lives. "I remember." He replies. "It went on bloody year after bloody year."
Kirk then notes that the only solution now is the one that was pursued then (in Vietnam): "a balance of power." 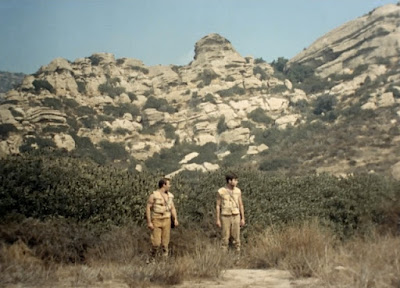 I appreciate the fact that the episode is nuanced in its portrayal of the conflict, and makes us feel, painfully, the agony of Kirk’s difficult decision. He can walk away, obey the Prime Directive, and watch Tyree’s people fall before the Klingon-backed Villagers. He could just wash his hands of the whole thing. He’s within his rights and prerogatives to do so.
But he doesn’t do that. He chooses a difficult path. He arms the Hill People, so that the planet’s natural balance -- villager and Hill People -- will both endure the interference of the outside forces The downside is that his involvement, as well as the Klingons’ involvement will result in an ongoing war, and the death of millions.
It is very likely, as Bones points out, that Tyree will be one of the first casualties. Kirk is condemning the planet to war. But if he leaves, he is condemning the Hill People to extinction.
I appreciate that there is no easy answer or solution to this problem, and that Kirk has to pick the least-bad choice.  That seems very real to me, and in keeping with the world that we live in.
I appreciate too that Kirk and Bones vehemently disagree, and yet, remain friends through their arguments.  They have different answers to the crisis of Neural (maybe one is a democrat and one is republican….) but at the end of their heated discussions, they go on, and remain trusted friends.  We need more of that comity here, in this world.  Both the passionate, heartfelt discussion of issues, and the idea that there is a time to put that disagreement down, and move forward together.
I also like the whole somber feel of "A Private Little War," and the fact Kirk has done his human -- and therefore fallible – best to come up with a good answer for Neural. Some may see that he is making the situation worse, or committing a planet to a dark future.  Some may feel he gave the Hill People their last chance.  Even he doesn't know if his decision is correct.
For me, this is exactly the kind of story that a series like Star Trek should tell. One filled with ambiguity, nuance, and difficult choices.  "A Private Little War" leaves one thinking about it, long after the end credits roll.
Whatever your belief, there is no pretty, happy or pat ending to be had here, and Kirk and McCoy are abundantly aware of that. 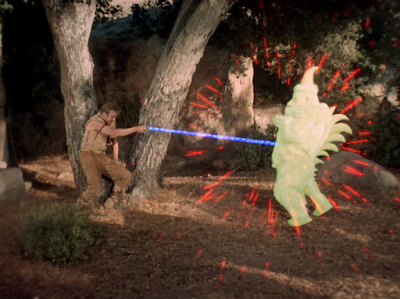 Some time back, I discussed what I feel is the “perfect” Star Trek episode, and came up with “The Corbomite Maneuver” as being the most representative of the series’ spirit. I still think that's so.
Yet I also I feel that “A Private Little War” could also be a valid choice on that select list. It features an involving tale of an alien culture, and yet, simultaneously the Swiftian commentary about the time or context  in which it was created; the Vietnam War.
But the episode features other values that Star Trek possesses in abundance.
For example, "A Private Little War" is also rather kinky or erotic, particularly in the presentation of Nancy Kovak’s sensuous and manipulative Kahnutu woman.  She is a powerful and strong character, and one who challenges all those around her.  The episode adds another layer of mystery in her cure of Kirk; and the (myth?) that she now owns him body and soul.  Does that account for the fact that their agendas align? 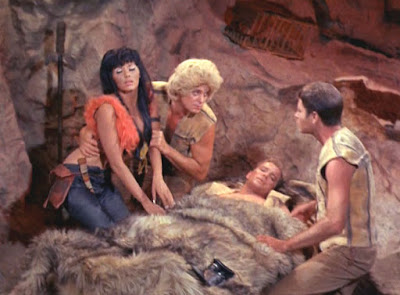 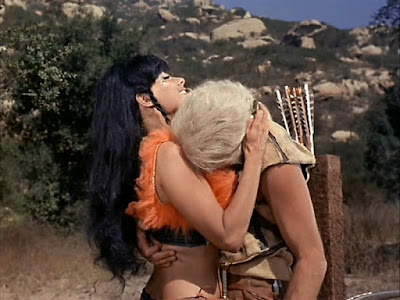 There’s action aplenty in the episode as well, and we even learn more about Vulcan nature, thanks to Mr. Spock’s recovery on the Enterprise. The action with the Mugato and the humorous scenes with Chapel keep the story from becoming a polemic. 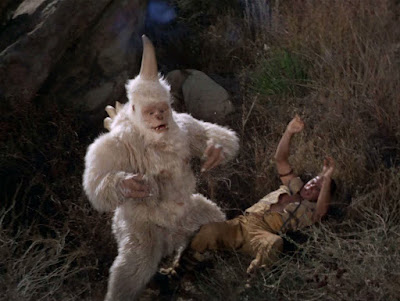 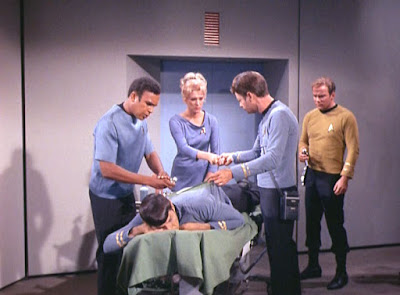 Finally, the series also lives up to the promise of  a future of equality and diversity, by introducing us to the accomplished, and wonderful character of Dr. M’Benga. We see him again in "That Which Survives."
Basically, all the elements are in place here to render a highly positive verdict on "A Private Little War," though certainly one could say that a great Star Trek episode should have a more central role for Spock in the action.
at September 08, 2022