Stardate: 5431.4
An ion-drive powered alien spaceship intercepts the U.S.S Enterprise, and deposits one life-form on the bridge. This strange woman, Kara (Marj Dusay), incapacitates the crew, rendering everyone unconscious.
When the crew awakes, a startling discovery is made. The interloper stole Mr. Spock (Leonard Nimoy’s) brain. Now, Dr. McCoy (De Forest Kelley) suggests he can only keep the half-Vulcan alive for 24 hours without Spock’s brain.
But Captain Kirk (William Shatner) insists that in that 24 hours, he will recover that missing brain.
To start, the Enterprise follows the spaceship’s ion trail to the Sigma Draconis system.
There, on the sixth planet, humanoid Morgs (men) and Eymorgs (women) live apart. The men are primitive and live together on the icy surface, fearful of the eymorgs; the “givers of pain and delight.”
Beneath the surface, the women live in a subterranean technological society; all their needs for survival met by a computer.
There, underground, Kirk learns, that Spock’s brain is being used to power and regulate the entire complex.  Now Kirk must negotiate for the return of Spock’s brain, but even if he succeeds, the surgery is impossible by current standards.
Fortunately, a device called the Teacher holds the answer…if only McCoy can avail himself of it, and then remember the knowledge. 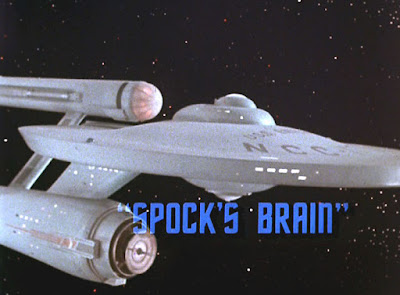 It will come as no surprise to readers when I note that “Spock’s Brain” is considered the very worst episode of the original Star Trek (1966-1969).  =Many words, sentences, and paragraphs have been devoted to this installment’s many flaws.
However, I disagree with that assertion that “Spock’s Brain” is the worst episode of the series for a few reasons, though I acknowledge it is, indeed, a very bad episode.
But there are at least two stories which are worse.
My two selections for worst episode of Star Trek are actually “And the Children Shall Lead,” which is hobbled by a dreadfully-stilted central performance from attorney Melvin Belli and a humorless, unsavory plot-line (the corruption of children), and “Requiem for Methuselah,” which features an unbelievable (and utterly unconvincing) love-story for Captain Kirk.
But “Spock’s Brain?”
Well, it’s extremely low-brow, and yet it manages never to bore. It’s Star Trek, just Star Trek on a really dumb, superficial level. It is juvenilia, and most episodes of the series are never even in the same solar system as juvenilia.  On the other hand, it would be difficult for me to deny that “Spock’s Brain” moves at a faster-clip than last week’s episode, “Assignment: Earth.”
But this episode is so distinctive, so memorable, in its utter weirdness and wrongness, that it’s easy to see why people remember it as the worst. Once you’ve watched it, you’re not likely to forget it.
In fact, even twenty years after its first airing “Spock’s Brain “was being recalled and parodied, which proves, if nothing else, the story’s utter uniqueness, or hapless charm. It may be bad, but somehow this  badness has stood the test of time, and people feel affectionate towards it.
I’ve never met a Star Trek fan, by contrast, who feels affectionate towards “And the Children Shall Lead.”
So why does “Spock’s Brain” fail…so colorfully?
Well, for one thing, I have a theory about William Shatner and his acting style, and it goes like this: The worse that the material is that he must contend with, the more Shatners invests, emotionally, and even in terms of his energy level.  It’s as if he’s facing a mountain he must climb. He steels himself, and gives it everything -- EVERYTHING -- he can, so as to breathe life into it. 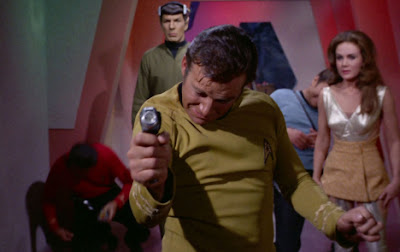 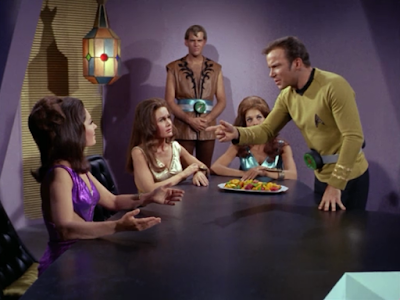 Here -- given a patently absurd teleplay -- Shatner simply over-invests to the point of near-insanity, hoping to pull off the drama.  He makes Kirk bitchy and obsessed, and single-minded to the nth degree. I actually commend him for his efforts, but Shatner’s performance contributes, finally, to the feeling that the episode has adopted some weird, hyperbolic, hysterical tenor. 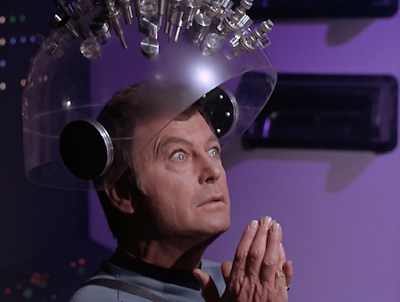 And DeForest Kelley faces a similar problem. He goes from dead-pan seriousness to over-the-top bug-eyed, failing to modulate his performance effectively from scene to scene. One minute he’s asking (seriously) the (awful) question: “In the whole galaxy, where are you going to look for Spock’s brain?” with utter solemnity. And in the next he is marveling, wide-eyed, that a child could complete the brain surgery.
Understand, please, that I love both these actors, and don’t intend to insult them. They were faced with a crappy script, and had to figure out some way to make it sing. They made choices, according to their particular gifts, and yet those choices don’t, ultimately, work towards the story’s success.
Instead, they make the story feel campy. 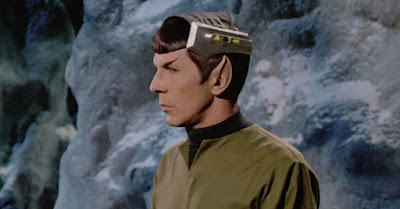 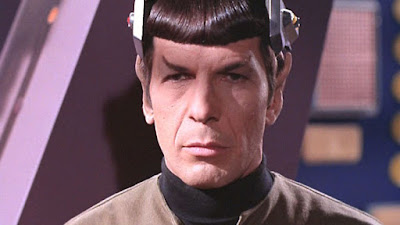 Finally, the marvelous Leonard Nimoy often grants a weak Star Trek story some facet of dignity. He is someone who underplays a scene to perfection, and restrains his emotions brilliantly. Here, Nimoy is reduced to the level of a walking piece of furniture. Mindless, but ever-present.  And no, it doesn’t seem terribly dignified.
The actual mechanics of the story are baffling too.  Spock’s brain is stolen, and re-inserted into his skull, and yet -- in neither instance -- is his head shaved, his skin cut.  The idea of high-tech brain surgery might have worked a bit better if we had a constant physical reminder of what Spock endured, physically.  We don’t.
Or, the stolen brain concept might have worked had we been given the information that the brain had been “beamed” out, rather than cut out. This would be in keeping with Trek technology, and also permitted us to understand why Spock’s hair was not cut off.  But it seems ridiculous for the man to go through two brain surgeries in an hour-long episode, and never have even one hair out-of-place.
And don’t even get me started on the idea of Spock leading Bones through brain surgery, once his voice box is reconnected.
For one thing, this help from Spock diminishes the dignity of Dr. McCoy, who should be able to get through a surgery without the verbal instructions of his patient.
And for another thing, it diminishes Spock too, making him seem invincible. He can actually give a doctor instructions for reattaching his brain.  That feels very….cartoon-ish.
The episode is sloppy too. Sigma Draconis VI is twice called Sigma Draconis VII by principal cast members, for example. This is not a small detail in a system of many planets, right? 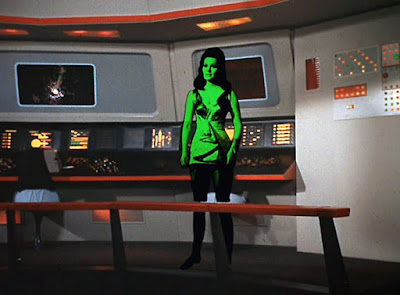 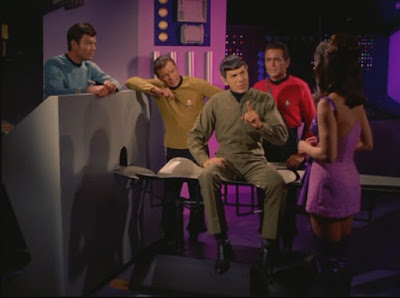 All of these problems suggest that “Spock’s Brain” is a train wreck.
Yet it is a train-wreck, as I’ve intimated above, that you can’t stop watching, that you can’t quite turn your back on. The episode is dynamic in terms of its color, its movement, even its eye-brow raising hysteria.
It’s unforgettable, really.  These qualities make it odd, but they don’t make it the very worst Star Trek.
The silliest episode? Perhaps so.
The most over-the-top in terms of acting? Indeed.
The most ill-conceived?  No argument.
“Spock’s Brain” should have never gotten past the idea stage in the first place. But beyond that, it should never have been slated as the premiere for the third season, either.
As a kid, I first saw the series in local affiliate reruns, so I never had to see “Spock’s Brain” as a premiere and suffer that sinking feeling that things were taking a turn for the worse.  Instead, I merely saw it as a bizarre and not very good episode. I can only imagine what dedicated fans felt, tuning in to a new season and seeing…this.
I would suggest that my reading is correct, however.  This is a bad episode, sure.
But others are worse, in part because they simply aren’t as gonzo-nuts and flat-out unforgettable as “Spock’s Brain” remains.
at September 08, 2022