Stardate: 4040.7
After discovering the wreckage of the S.S. Beagle in space, the starship Enterprise tracks survivors to a class-M planet that, for all intents and purposes, is a 20th century Roman Empire.
The planet is ruled as Ancient Rome once was, and even conducts gladiatorial games, but this time for TV consumption! It is a striking example of parallel world development.
When the Enterprise monitors a TV transmission that mentions barbarians dying in the colosseum games, Captain Kirk (William Shatner) realizes that the crew of the Beagle was sent into combat to fight.  Hoping to learn more about this grim fate, the Captain, Mr. Spock (Leonard Nimoy) and Dr. McCoy (De Forest Kelley) beam down to the world’s surface. The Prime Directive -- the non-interference directive – is in full effect.
There, on the planet, Kirk and his party are befriended by renegade slaves and “Sun [sic] Worshipers.”
One of the peaceful men, a former gladiator named Flavius (Rhodes Reason), is asked by another, Septimus (Ian Wolfe) to escort the strangers to the city to help them learn about what became of the Beagle crew.  But the landing party and Flavius are promptly captured by the Romans.
In the city, a captive Kirk learns that the captain of the Beagle, Merrick (William Smithers), now serves the cunning Proconsul of the Empire, Claudius Marcus (Logan Ramsey).  Marcus wants Kirk to beam down his crew to fight -- and die -- in the arena.
If Kirk refuses to cooperate, he will have to watch Spock and McCoy fight to the death in the same venue.
Fortunately, Scotty (James Doohan) arranges a diversion from the bridge of the Enterprise, one that doesn’t violate the Prime Directive.
After the landing party returns to the ship safely, Lt. Uhura (Nichelle Nichols) reveals some information that she gleaned from the air-waves she monitored.
Flavius and others did not worship the sun in the sky.  Rather, they worship the son of God. What the crew witnessed on the planet was the beginning of Christianity on the Roman world. 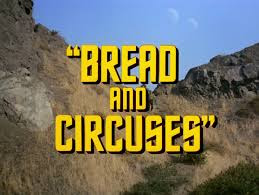 “Bread of Circuses” is another second season “parallel world” Star Trek (1966-1969) story, one in which a far distant planet in the galaxy develops in a manner exactly like some historical example on Earth.
In the other two prominent stories of similar types, “A Piece of the Action” and “Patterns of Force,” the parallel culture develops because of either inadvertent or intentional interference from Federation personnel.  Historian John Gill models Ekosian culture on the Nazi example in “Patterns of Force.” And a book, Chicago Mobs of the 20s, pollutes the minds of the impressionable denizens of Sigma Iota.
The parallel Roman culture that arises here (as in “The Omega Glory”) is a natural development, by contrast. (Either that, or we don’t know the source. It could be the Preservers, I submit).  The Roman culture seems, however, to have arisen naturally, and lived well beyond the time period that the society did in Earth history.
In fact, the Romans are so strong (and so ruthless) that they take down would-be interferers here, casting those they deem “barbarians” (out-worlders) into the arena to be massacred. The whole episode is tense, in part, because the Roman State is so well-organized and so well-run that Kirk isn’t even thinking about interfering or “setting” things right. Basically, he just wants to get out with his skin (and his officers’ skin) intact. He is captured, pressured, seduced, pressured again, and attacked. 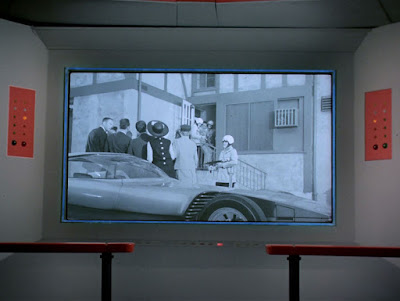 The primary strength of “Bread and Circuses,” however, is of an outside thematic nature, not an “in world.” continuity one.  Specifically, this story serves as a commentary on our own culture of the 20th and 21st centuries.  The cut-throat world of gladiator games is explicitly connected to the cut-throat world of television production in the mid-to-late 1960s.
Here, the televised games of painted backdrops, canned applause (and boos too), and ratings are apparently a concern for the Romans  At one point, Kirk makes an observation that TV entertainment on Earth was apparently similar to that featured on this planet, a cutting joke about how dramatic programming lives and dies by the ratings on NBC, CBS, and ABC.  No one, apparently, wants the Empire (or the Network) to do a “special” on them, if they step out of line. 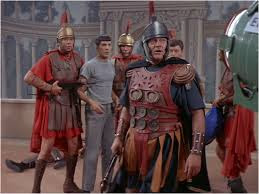 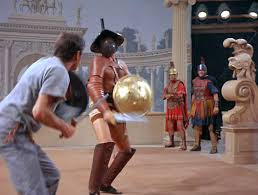 The episode is also notorious for its controversial conclusion, which is very much open to interpretation.
Some viewers and historians see the episode as a validation of Christianity as a force in Star Trek’s universe. Coupled with Kirk’s comment in “Who Mourns for Adonais” that one God is “quite sufficient,” Christian Trek fans have made a case that the Christian religion survives and prospers to the 23rd century, despite creator Gene Roddenberry’s self-proclaimed (and well-known) atheism.
Here, for instance, Lt. Uhura notes that cynical Romans could not invalidate the nature of the Son Worshiper’s belief system, and McCoy calls it a philosophy of “total brotherhood” and “total peace.”  Kirk expresses his fascination with the rebirth of Christianity on this world, and marvels that it would be amazing to be a part of it, to see develop all over again. Rome, after all, had Caesar and Christ. 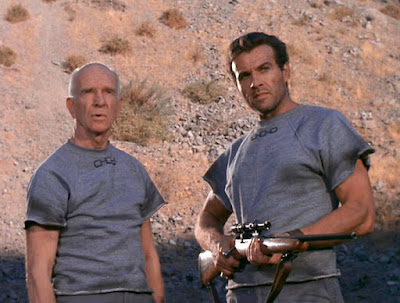 Others have argued that “Bread and Circuses” ends with, simply, the crew’s historical interest over seeing a major touchstone of human development repeat itself. It’s not that the crew is espousing Christianity. Rather, it is marveling at seeing one of the moving forces of humanity happen all over again.
Either way, it’s a fascinating end to the episode.  I like, actually, that the episode’s conclusion is open to multiple interpretations.  I think that makes “Bread and Circuses” much more intriguing than it might have been as merely another “parallel” world story.
For the most part, I also appreciate the banter and humor in the episode. However, one scene goes a little far (for my taste). The scene in which McCoy and Spock bicker in the jail cell gets a little mean, in my opinion.  McCoy just really goes for the jugular, and then, after having attacked ruthlessly, says “I know, I miss Jim too," in substitute for an apology.  Spock could have said “I worry about the Captain as well, but my worry did not require me to attack you.” Seriously, McCoy is way over the line in terms of nastiness in this scene.  That doesn’t mean I believe his observations are wrong. Only that he needn’t be so cruel in his discussion of them.
at September 08, 2022