Stardate: 4842.6
The U.S.S. Enterprise visits a wild and natural M-class planet that is imperiled by a colossal, approaching asteroid.  The inhabitants of the planet (in some sources: Amerind) are all Native American tribes from Earth’s distant past.
Upon beaming down to the beautiful planet, Captain Kirk (William Shatner) reflects on the idyllic, simple, and peaceful nature of the world. Dr. McCoy (De Forest Kelley) calls his musings a “Shangri-La Syndrome” and says it is the result of over-work and stress.
The landing party, which also includes Mr. Spock (Leonard Nimoy), soon encounters a strange silver obelisk in a forest clearing, but its purpose and origin are not plain. Before beaming up, Kirk visits the obelisk alone one final time, and accidentally activates a trap-door entrance.
Once inside the under-structure, Kirk’s memory is wiped by a computer panel. On the surface, Spock and McCoy -- unable to find the missing Kirk -- are forced to abandon the search, and contend with the approaching asteroid.
An amnesiac Kirk soon finds his way out of the obelisk or “temple,” and becomes “Kirok,” a new tribe-member. Because of his advanced knowledge, he is soon made the medicine man of the Native American tribe, and married to the chief’s daughter, the lovely Miramanee (Sabrina Scharf).  This new arrangement does not meet with the approval of the former medicine man, Salesh (Rudi Solari).
Meanwhile, Spock is not able to stop the asteroid’s approach, and realizes that the strange writings on the obelisk may hold the key to saving the planet, and Captain Kirk too. 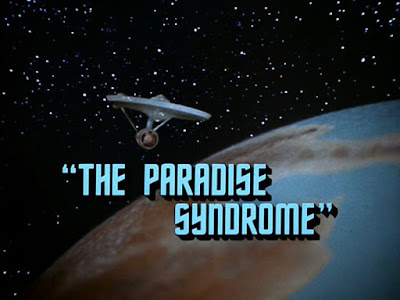 The third season of Star Trek (1966-1969) undeniably had a rocky start with the silly (but quite colorful) “Spock’s Brain.”
But the follow-up two episodes -- “The Enterprise Incident” and “The Paradise Syndrome” -- put truth to the lie that the third season was all bad, or generally of a low quality. These are two outstanding episodes, superbly acted, and brilliantly told.
In terms of “The Paradise Syndrome,” this story is something a relief for those who analyze and wonder about Star Trek canon and galactic history. Throughout the series thus far, the Enterprise has encountered, inexplicably, parallel worlds all over the galaxy. There are parallel Earth’s discovered in “Miri” and “The Omega Glory.” And Earth cultures such as Ancient Rome spring up on distant planets, as well, in stories such as “Bread and Circuses.”
Up until now, no compelling answer has explained this mystery.
“The Paradise Syndrome” proposes a fascinating solution. Basically, it posits the existence of an alien race known as “The Preservers” that seeded the galaxy with endangered humanoid forms. Apparently, this very advanced race had a special interest in Earth, and seeded Native Americans on the world encountered in this story. 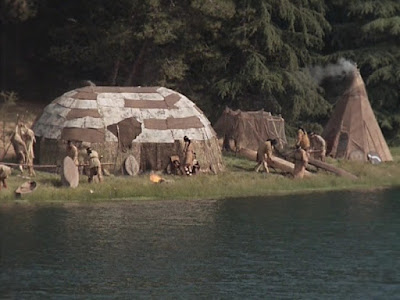 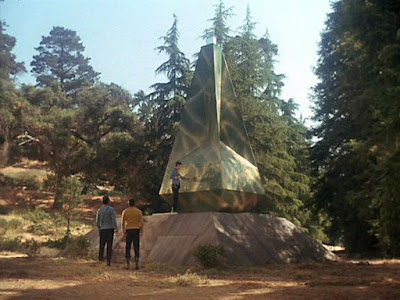 But if the Preservers -- so technologically advanced -- possessed the equivalent of Genesis technology, they might have terra-formed, literally, a new Earth for the world in “Miri,” since that planet possesses the same dimensions and continents as our world. That’s just my speculation, of course, but the introduction of the Preservers allows for a deeper understanding of Star Trek and its galaxy. It is fodder for endless speculation.
It’s true that The Preservers aren’t a perfect answer for the mystery, but it’s a far better one than the series had yet provided, and look, here it is in the derided third season.
Moving beyond this point of continuity, “The Paradise Syndrome” is a great Kirk story, and a heart-breaking one at that. Here, the amnesiac captain finds love with the gentle and sweet Miramanee, and even conceives a child with her. But by episode’s end, both his wife and unborn child are dead, destroyed by Salesh’s vengeance (and Kirk’s inability to activate the obelisk’s force field.) Even though this ending is likely a foregone conclusion, given TV formulas of the 1960s, the climax is of great emotional impact. 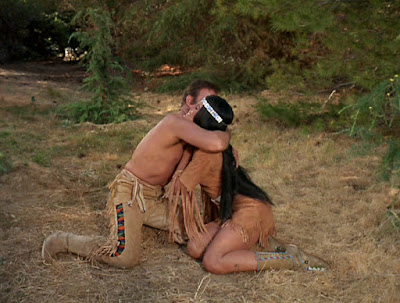 The best quality about “The Paradise Syndrome,” however, isn’t even the pathos over Kirk’s tragic loss. Rather, it is the episode’s excavation of the man’s general or overall character. This story forces viewers to reckon with the fact that even without his memories, Kirk is recognizable as the same man he has always been.  He’s still a natural leader. He’s still brave, and ingenious.
He’s still got, of course, an eye for beautiful women.
And, finally, Kirk possesses enough self-confidence to believe, perhaps, that he is a God. How else to explain, after all, the things that he knows, but that his people, the Native Americans, do not?
It seems very true to the Kirk character that even seeking a simple life and escape from responsibility -- hence the aforementioned Shangri-La Syndrome -- he should immediately step into a void and become a leader, accepting new responsibilities. Spock said that captaining a starship is Kirk’s “first, best destiny” in The Wrath of Khan (1982), but what he may also be stating, it seems to me, is that Kirk is a leader, and must always lead.
Even without explicit knowledge of the Enterprise, or Starfleet Command, Kirk proves that idea true in this story.
Although my next remarks will likely prove contentious for some, I find Kirk’s relationship with Miramanee in “The Paradise Syndrome” more emotionally affecting than his just-as-doomed relationship with Edith Keeler in “City on the Edge of Forever.”
Perhaps this is so because in “The Paradise Syndrome,” Kirk truly lets down emotionally, casting aside the weight of the universe (and the timeline) and just gets to be…human. His relationship with Miramanee doesn’t seem forced or arbitrary (see: “Requiem for Methuselah,”) and it is believable to me that this man, far away from a life of constant danger and command, would seek out so kind and sweet a soul as Miramanee.
I feel that Kirk admires Edith’s mind, and is attracted to her strength and resolve too. But his love of Miramanee seems somehow more genuine, or real. Accordingly, I find the episode’s climax absolutely devastating, as Kirk sits at her bedside, as she -- and their child -- die.  Kirk doesn’t have to “choose” to save a lover in this story. Instead, he is fully human, like any of us, watching and unable to prevent it as a love one is taken from him. With Edith, Kirk always knows, at least on some level, that he has to be the captain. With Miramanee, he can just be James Kirk.
Of course, your mileage may vary. And the stories aren’t in competition, either. I just mean to suggest that I find Kirk’s relationship with Miramanee to be the most affecting “love story” for the character of Kirk. 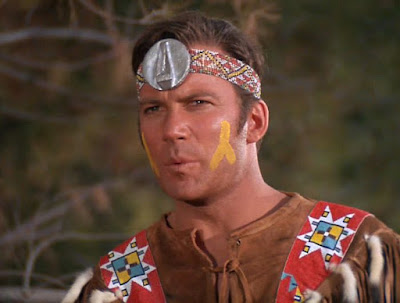 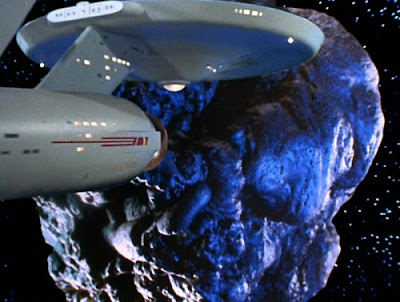 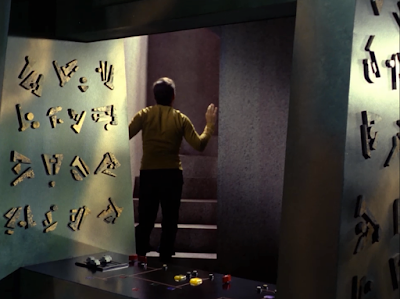 Another great moment in the episode involves Spock’s attempt to mind-meld with Kirk, and re-assert the Captain’s identity. Only it’s easier said than done. Spock discovers what we all know by now James Kirk is an extremely strong-willed and stubborn individual.
at September 08, 2022