Stardate 3113.2
After an encounter with a “black star,” the Enterprise is hurled back through time and space to Earth orbit in the year 1969.
There, the U.S. Air Force sends a jet, Bluejay 4, commanded by John Christopher (Roger Perry) to intercept what appears to be a UFO in American airspace.
Christopher sees the Enterprise and takes film of the future craft.
After the Enterprise’s tractor beam crushes Christopher's plane, Kirk beams the pilot aboard, but realizes he has a bigger problem.
The Enterprise is not only marooned in time and space, but Kirk must decide what to do with Christopher.
If he sends him back to Earth, Christopher will be duty-bound to report on everything he has seen and heard aboard the starship.
If Kirk holds him prisoner, however, Christopher will not be able to return home and have a son.
That son, Mr. Spock learns, will play a crucial role in space exploration, specifically a mission to Saturn.
To make matters worse, Christopher’s film has been recovered by the Air Force, and is being held at a base in Omaha.
Now it must be retrieved, and Kirk must decide the fate of Captain Christopher once and for all. 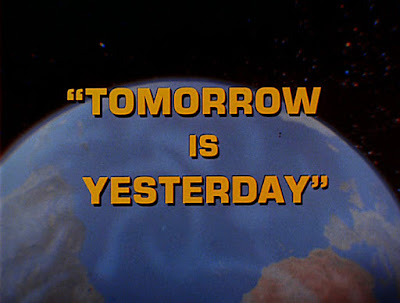 D.C. Fontana is one of my all-time favorite Star Trek writers. “This Side of Paradise,” by Fontana is my all-time favorite episode, actually.
In the past, I have always enjoyed “Tomorrow is Yesterday,” but feel that today, in 2016, that it does not hold up as well as once it did.  The episode was reportedly De Forest Kelley’s favorite of the entire series, and many fans love the installment.
And it sure starts out with the bang. I love the unexpected and shocking imagery of the Enterprise in Earth's sky.  Talk about a jolt. 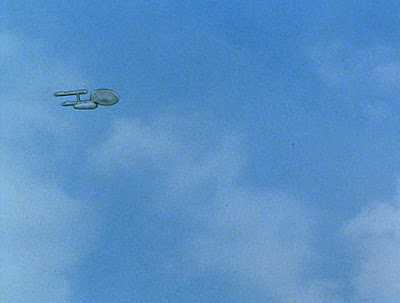 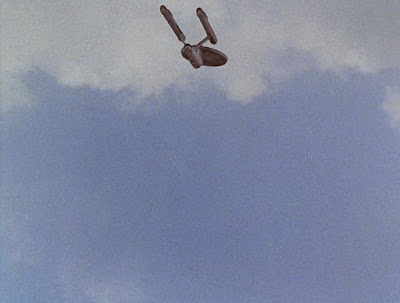 First things first, however.
“Tomorrow is Yesterday” is one of the most important and influential episodes of the series. With a story by Robert Justman and a teleplay by Fontana, this episode was intended to be the second part of the episode “The Naked Time.”
As you will recall, that episode ended with the Enterprise traveling back in time, and Kirk musing that the technique might be used again someday.
Plans changed, and the two episodes were un-tethered from one another.
Instead, “Tomorrow is Yesterday” developed a new method of time travel: a combination of “breakaway” (intense) speed, and a sling-shot movement around a star’s orbit.
That is the very method by which the Enterprise returns to the 23rd century in this story.  It is also the same technique that Kirk and Co. use again in Star Trek IV: The Voyage Home (1986). So this episode introduces a key concept to the franchise: the ability of Starfleet vessels, in emergency situations, to travel through time.
Similarly, this episode sets down important marker about how time travelers from the future should act in the past.  This factor plays into “Assignment Earth” and the aforementioned Voyage Home.
Here, Captain Kirk can’t return Christopher to Earth, without fear of altering his timeline. In an overturning of that well-established concern, however, he brings Dr. Gillian Taylor (Catherine Hicks) to the future with him in the fourth Star Trek film. 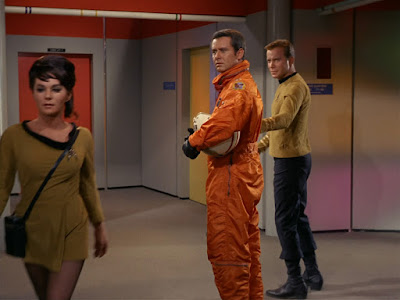 The episode’s big problem, by my reckoning, involves the method by which the Enterprise returns both Captain Christopher and an air base security officer to Earth.
Specifically, the Enterprise leaves orbit, accelerates towards the sun…and moves backward in time.
Then, the ship ‘beams’ these 20th century men back into their own bodies, before they encountered the Enterprise in the first place.
By doing so, these new men experience a new time line, one where they don’t encounter the Enterprise.
Huh?

First of all, since when can the Enterprise transporters extend beyond the distance of orbit?
Secondly, the idea of beaming people "into" themselves is weird and awkward, I feel, and doesn’t make sense.
If the Enterprise is actually unwinding the spool of time, and traveling backwards in time, by placing a “new” Christopher over the "old" one, the crew is actually ensuring that both Christopher and the guard will possess all their memories post-abduction, not the opposite.
Essentially, they are beaming “newer” versions of these characters -- with more recent memories -- over "older" versions.
Also, I am not at all certain that the transporter should work this way.
If the transporter officer is beaming down people into a body seated in a cockpit, or one walking in a corridor, what happens to the original bodies? Is the transporter de-materializing or destroying the old bodies, and replacing them with the newer ones?
One body can't possess the mass of two bodies, after all.
Taking an even wider viewer, why doesn’t the Enterprise just disintegrate the “newer” Christopher and security guard all together, and let the old ones continue their lives, but without seeing the Enterprise, in this new time-line?
Or, the air force officer and Christopher could stay on the Enterprise and travel into the future while their older counterparts -- the ones they apparently beam "into" -- continue on to live their lives none the worse for wear, and without any knowledge of what happened.
I readily admit that I may not understand all this clearly, but the episode boasts a serious flaw: it doesn’t seem to have a good understanding of the mechanics of the situation, either.
The answer to the time travel riddle as proposed and orchestrated in “Tomorrow is Yesterday” just isn't logical, to coin a phrase.
Even if the Enterprise goes back in time, there’s still the other Enterprise for Christopher and his wing cameras to see, right? It's not erasing a previous time-line, or destroying its own tracks, is it? 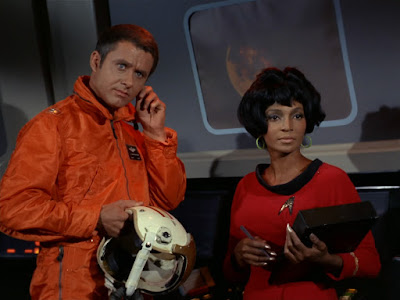 I also have a bit of a problem with Christopher’s behavior in the episode. He attempts to escape from the Enterprise, to the Omaha base, after learning that Kirk, Spock and the others have committed to sending him back…so as to preserve their time line.
Why would he attempt to escape, given what they have at stake in returning him?
Let me get it straight: He is trying to escape captivity on the starship to preserve his son’s future, by interfering with the time-line that his son’s birth creates?
Okay.
I love Star Trek, and as I’ve written above, I love D.C. Fontana too. She's a great writer, and has written so many important chapters of science fiction TV history. I hesitate to think how the genre's history would be unraveled if we did not have, for the record, her many remarkable works on Trek, Land of the Lost, The Sixth Sense, Ghost Story/Circle of Fear, The Six Million Dollar Man, The Fantastic Journey, and Logan's Run, to name just a few titles.
“Tomorrow is Yesterday” is delightful at times, and boasts such a fine understanding of the characters, from Sulu’s fascination with the 20t century to Spock’s guarded suspicion about Christopher. McCoy also gets some great jokes here. The character repartee is sharp, and viewers care both about Christopher and the Enterprise getting home safely. In this sense, the episode is sharp and certainly "works."
But what I never saw when I enjoyed this episode in younger years, I suppose, is that “Tomorrow is Yesterday” is indecipherable, inconsistent, and just plain goofy about its use of time travel mechanics.
As McCoy might remind us at this juncture, nobody’s perfect.
at September 06, 2022