Stardate: 3842.3.
On the way to the Babel diplomatic conference, the Enterprise makes a stop at Vulcan to pick up Ambassador Sarek (Mark Lenard), and his wife, Amanda (Miss Jane Wyatt), Spock’s parents.
Other alien ambassadors are also traveling aboard the Enterprise, including Shras (Reggie Nalder), an Andorian), and Gav (John Wheeler), a Tellarite.  The issue at stake for the Federation is the admission of a non-aligned planet, Coridon.
Unaligned, the planet is under siege for its rich supply of Dilithium crystals. Orion pirates have been among those parties raiding the planet.
When Gav is murdered, apparently by use of a Vulcan technique, Tal-Shaya, Sarek is the prime suspect in the crime. But, as Sarek reveals: he is suffering from a grave cardiac condition, and was incapacitated at the time of the Tellarite’s death.
Soon, there is another assassination attempt. Kirk is attacked and stabbed by an Andorian, Thelev (William O’Connell).  Accordingly, Spock takes command of the Enterprise in the crisis, but his presence on the bridge means that he cannot be present in sickbay to give a blood transfusion to his dying father. 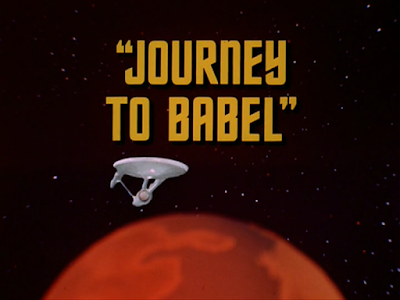 D.C. Fontana’s “Journey to Babel” is another superb,  absolutely top-drawer episode of Star Trek (1966-1969). It is probably one of the top ten episodes of the series, in whole, and one of the best of the second season (along with "Amok Time," "The Doomsday Machine" and "Metamorphosis".)
This episode not only establishes much about Spock’s youth and history, it introduces the characters of Sarek and Amanda, who have appeared in the franchise many times since. Sarek returned in the feature films Star Trek III: The Search for Spock (1984), Star Trek IV: The Voyage Home (1986), as a young-man at Spock’s birth in The Final Frontier (1989), and in The Undiscovered Country (1991). He also appeared in two episodes of The Next Generation, “Sarek,” and “Unification.” The latter depicted his death.
Jane Wyatt returned for Star Trek IV: The Voyage Home, and both characters were also re-booted in J.J. Abrams’ Star Trek (2009), played by Ben Cross and Winona Ryder.
Recently, there was word that Amanda may play a role in the new Star Trek: Discovery (2017).
On a wider scale, “Journey to Babel” introduces to key alien races to the series: the Andorians and Tellarites. 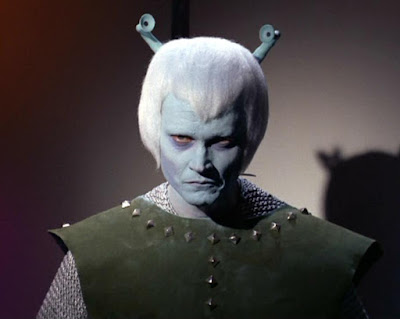 In terms of narrative, Fontana’s story also serves as a kind of prototype for future tales. The idea of a starship shuttling ambassadors to a conference, with murder and intrigue aboard, recurs in the Star Trek franchise in stories such as Star Trek: The Next Generation’s (1987-1994) “Lonely Among Us” (with the Antican and Selay), and in Enterprise’s (2001-2005) “Babel One,” a key call-back to this installment.
Also, this episode cements some key concepts about Vulcans. One isthat they use the touching of the hands in ways that human don’t; namely to signify intimacy and connection.  Sarek and Amanda, in particular, embody this ideal.  We see it again in “The Enterprise Incident” (between Spock and the Romulan Commander), and during The Search for Spock’s Pon Farr sequence. 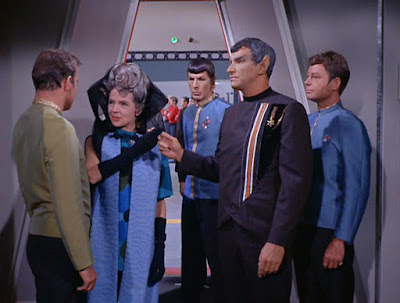 Additionally, many of Spock’s background details, name-checked here, are given further detail and coloring in D.C. Fontana’s “Yesteryear,” an episode of Star Trek: The Animated Series (1973). In particular, we learn that he had a pet sehlat.
Some fans have also identified “Journey to Babel” -- particularly the reception scene, with its colorful and diverse aliens and unique alien food and beverages -- as a possible influence for Star Wars’ (1977) much-beloved cantina sequence. 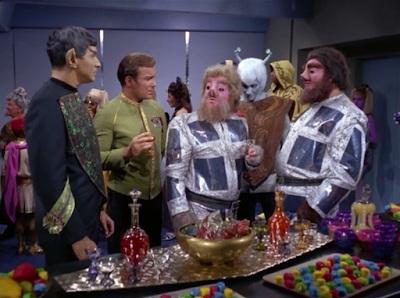 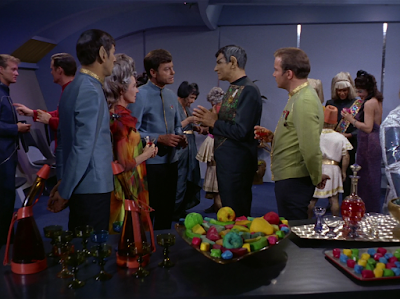 But the primary value of “Journey to Babel” arises not from the fact that it is so influential, but rather
the interpersonal fire-works.
In particular, the story diagrams a topic that was much-talked about in the late 1960s and early 1970s: the generation gap. This particular generation gap might be defined as a gulf between parents and children over everything from music, sexual mores and politics to religious belief and hair-styles.
Spock and Sarek embody that gap perfectly here.
Sarek does not approve of Spock’s choice to enlist in Starfleet and serve among humans. Spock, meanwhile, has rejected his family’s tradition of attending the Vulcan Science Academy.  Poor Amanda stands trapped in the middle, attempting to mediate peace and understanding between two very stubborn men.  She is not in an enviable position.
The emotional highlight of the episode, at least as far as I’m concerned, involves the scene between Amanda and Spock. She begs him to exercise his “human” half, and go to his sick father, who will die without his assistance.  Spock -- still seeking Sarek’s approval in some way -- instead goes into ultra-Vulcan mode, besieging Amanda with all the logical reasons why he cannot do so.
Amanda then tells a story about Spock as a child. She discusses how he was victimized by the Vulcan children, and how he had to bear the bullying with Vulcan stoicism.  The moment is enormously affecting, both in terms of learning about Spock’s childhood (and isolation), and in establishing Amanda’s character too.  Living on Vulcan has been difficult for her too.
The scene ends with Spock refusing to budge from his stance, and Amanda having an emotional outburst; slapping him across the face.
It is such a powerful moment that the audience feels it has been slapped as well.
The scene -- and the episode -- work so effectively because of the universality of such family experiences.
In the life cycle of a family, parents move from establishment and developing of a family unit, to launching their children into independence. This launching of the children into the world is so difficult, so fraught with emotion, because children may, in adolescence and young adulthood, reject the teaching of the parents.  They must “find” themselves, and that finding that identity sometimes involves choosing a new path.  Parents see that choice as negative, because they are still invested in the children, and, for the first time in a decade, don’t have control over important choices.  But importantly, they often seem to have forgotten what it was like to be young; to be taking those first uncertain steps to adulthood.
In the best tradition of Star Trek, “Journey to Babel” is all about how families grow and evolve -- and sometimes become estranged -- because parents and grown children refuse to give up their polarized views, and come together. They refuse to accept one another as individuals, and as ones with great differences.  I love that the Vulcans are utilized here to demonstrate this generation gap.  They believe in IDIC (Infinite Diversity in Infinite Combinations), and yet still have trouble accepting the choices made by their children or parents.
How very…human.
If “Journey to Babel” boasts any weakness, it involves Spock’s refusal to turn over command to Scotty or Sulu, to help his father.  Previous episodes have proven that both officers are capable of taking command in difficult situations.  Sulu took the Enterprise to war, essentially, in “Errand of Mercy,” and Scotty was in command during the Eminiar VII events (“A Taste of Armageddon).
Certainly, one can make the valid argument that Spock refuses to turn over command to these experienced officers because he has re-trenched into ultra-Vulcan, super-stubborn mode. To please Sarek, he must let Sarek die.
If you see it that way, I guess it holds up.
And, a lot of good character material emerges from Spock’s decision to retrench. Kirk must pretend to be healthy, though he is in agony, to trick the Vulcan into helping his father.  Kirk’s physical weakness contributes to the high-level of suspense in the episode’s third act. And McCoy, surrounded on all sides by Vulcan stubbornness, becomes more cantankerous than ever. 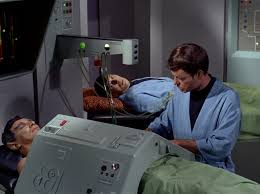