Stardate: 1329.1
The U.S.S. Enterprise pursues a “hazard to navigation,” a J-class cargo ship with no navigation beam.
The small ship attempts to evade capture, and darts into a nearby asteroid belt.
Captain Kirk (William Shatner) extends the Enterprise’s shields to protect the endangered ship -- over Scotty’s (James Doohan) objections -- burning out the starship’s lithium crystals, but managing to save the crew of the vessel.
Captain Leo Walsh (Roger C Carmel) and three unnaturally attractive human women -- Eve (Karen Steele), Magda (Susan Denberg) and Ruth (Maggie Thrett) -- beam aboard.
Almost immediately, the presence of the gorgeous women aboard ship causes “a mysterious magnetic effect” on the male crew-members of the Enterprise.
claims that the women are the equivalent of mail-order brides, bound for Ophiuchus 3 and new husbands, but Kirk is more interested in holding Walsh for trial.
The Enterprise limps to Rigel XII, a mining planet, to acquire the much-needed and rare lithium crystals, but Leo Walsh -- really a scoundrel and lawbreaker named Harcourt Fenton Mudd -- negotiates secretly by communicator with the leader of the humans there, Childress (Gene Dynarski).
Childress will only give Kirk the much-needed crystals if he drops all charges against Mudd, and allows the women to marry the miners.
As Captain Kirk negotiates, he learns the truth. The three women have taken an illegal medicine, the Venus Drug that creates the impression of incredible beauty. 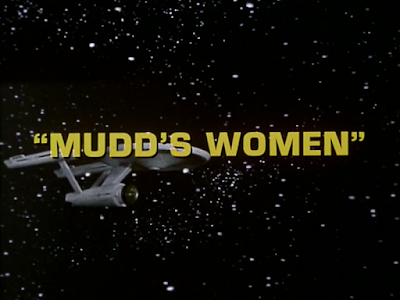 Would I have to turn in my Star Trek fan creds if noted that I am not the world’s biggest fan of Harry Mudd, or the episodes that involve this particular character?
It’s nothing against Roger C. Carmel or his performances. I just find the character, his costume, and his flamboyant behavior a bit too reminiscent of Lost in Space-Season 2.
He's the visitor to the ship/planet of different dress and different attitude, representing some aspect of old Earth (the pirate, or con-man).
A space-going con-man, scoundrel, of course is a popular character in science fiction productions. With names like Han Solo and Captain Mal Reynolds, the trope is well-represented in the genre. But Mudd -- with his big-sleeved blouse, large hat and twirly mustache -- seems more like a colorful cliché than a real person, let alone a real person that would be encountered by the starship Enterprise. 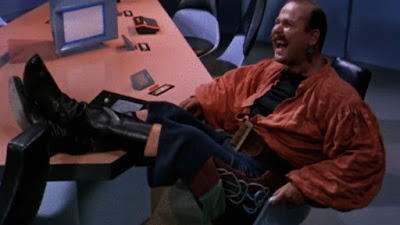 Especially the starship Enterprise as it is depicted in these early Trek episodes.
These stories feature the amazing “lower deck” component I've talked about before, exploring the personalities of non-bridge crew members. These stories are a bit more humorless, and sometimes even grim. So Mudd feels piped in from another universe all-together.
Also, without treading too deeply into sexual politics and the way that they have changed in fifty six years, I find it impossible to disregard the underpinnings of this story which state essentially that Mudd is both a pimp and a drug pusher.
He’s a “man used to buying and selling people.”
I don’t mind Star Trek featuring a pimp and a drug pusher. Or prostitutes. I believe all those elements can absolutely exist in a gritty, grim (and often kinky) series.
But I do object to the depiction of a criminal of that stature as a harmless buffoon, and charming rogue.  Mudd is trafficking in women. He's pushing illegal drugs. Those aren't funny quirks. Those aren't victim-less crimes. 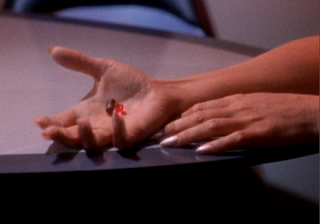 I suppose my disdain for Mudd puts me in the same camp with Captain Kirk, who seems largely non-amused by the character, at least here.
I also feel that "Mudd's Women" is terminally-conflicted between two aspects. On the "gritty" side we have miners living in a perpetual dust-bowls, desperate women willing to sell themselves to men they've never met, and a drug that, while being a "cheat," promises a temporary increase in sexual attraction.
Then, on the other side, we've got big, cartoony Harry Mudd. 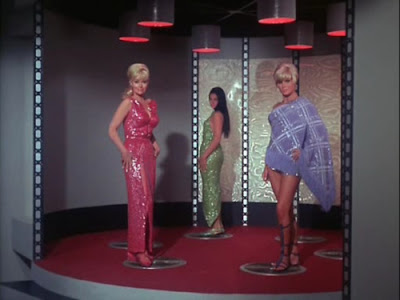 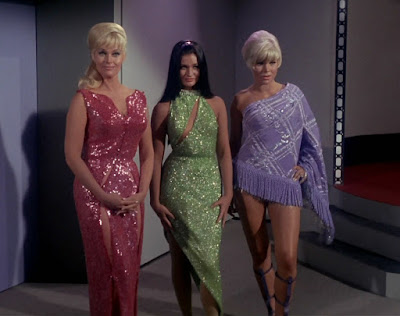 Also, “Mudd’s Women” feels over-the-top in the scenes involving the male crew-members lusting after Eve, Magda and Ruth. The soundtrack doesn't help.
To explain: these are men who serve with beautiful women every single day; women such as Lt. Uhura, Yeoman Rand, Nurse Christine Chapel, and Dr. Helen Noel.
There is no reason to portray the crew as sex-starved sailors who haven’t been to port, or seen a woman, in months. It’s just silly.
I realize the women are using the Venus Drug to seem more attractive, but even then, it's all a little nutty, especially given the stripper-styled sound-track accompanying the women everywhere they walk.
Still, some elements of "Mudd's Women" do work quite well, and add considerably to the Trek universe. I enjoy very much the dialogue and the relationship between Kirk and Eve. She is a smart, resourceful person, but an essentially lonely one. She shares that quality in common, I believe, with Kirk. In a way they are kindred spirits: both head-strong, both determined, and both alone. Also, they are both people of real integrity. 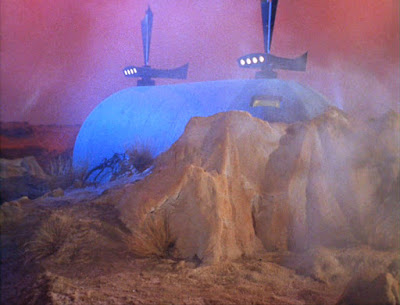 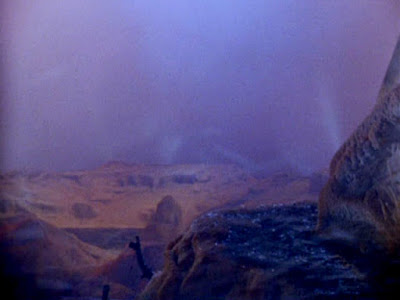 I also admire the episode's final act set on the windswept planet, Rigel XII. The miners there live in modest buildings...or hovels. The wind never stops blowing sand against...everything. Survival is difficult, and companionship the greatest treasure of all.
This is the real final frontier on the series, an inhospitable world being conquered, a hunk of dirt at a time, by pioneers and dreamers.
So often -- in all iterations of Star Trek -- the captains contend with Heads of State, Ambassadors and other “formal” personalities. In “Mudd’s Women” Kirk deals with Childress, a miner who wants what he wants and isn’t intimidated by the might of a starship. That's a really nice aspect of this program, I feel. 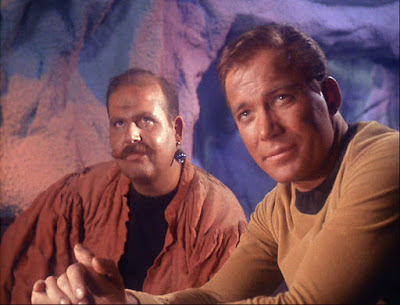 This episode also features some great Kirk/Star Trek wisdom (with a modifier from Mudd, so as to make it less sexist.):
“There are only two kinds of women in this universe -- or men for that matter. Either you believe in yourself. Or you don’t.”
Wonderful frontier philosophy… and words almost on a par with Kirks advice to Charlie in “Charlie X.”
Alas, while I believe wholeheartedly in this philosophy, I don’t believe that “being high on yourself” can actually change a person’s hair-do, or add make-up to their facial features  Eve thinks she takes the Venus Drug, but she's been tricked. It’s a placebo.
Still, she goes from un-made-up to made-up, from un-coiffed, to completely coiffed. Silly, but I guess her self-esteem transformation gets the point across.
In terms of Star Trek's on-going growing pains, this week we get a description of Spock as part "Vulcanian" (rather than Vulcan), "lithium" (rather than Dilithium) and Uhura in a gold uniform instead of her trademark red one.
at September 05, 2022