Stardate: Unknown
The Enterprise has traveled back in time to the year 1968 to study, up close, Earth’s history, and a very tumultuous year in the late 20th century.
Surprisingly, the ship intercepts a transporter beam that originates from somewhere outside the solar system, and materializes on the pad Gary Seven (Robert Lansing), a human raised on another world, now working in secret as an agent to save Earth from self-destruction.
Captain Kirk (William Shatner) is reluctant to let Gary, or his companion -- a cat named Isis -- depart the ship before he learns more, but Seven escapes and begins conducting his mission, which involves the United States space program, and a missile launch.
On the ground, Gary is assisted by a flaky secretary, Roberta Lincoln (Teri Garr), and a host of incredible gadgets, but Kirk and Spock (Leonard Nimoy) pursue him to the surface, fearful he is a danger, and attempt to stop his mission.
They find, however, that he is an ally, and that they can trust him. 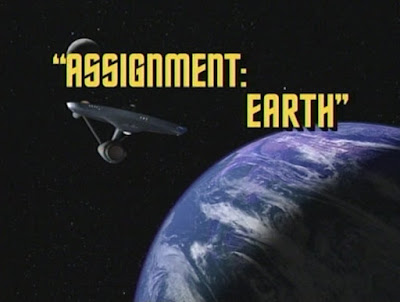 “Assignment: Earth” should likely be judged as a “pilot” for a new series, and not as a Star Trek (1966-1969) episode, since that is the story’s genesis. Gene Roddenberry had hoped to launch a sci-fi series about Gary Seven’s adventures on Earth in the late sixties, but nothing ever became of it.  This episode is Gary Seven’s only televised adventure.
As a pilot, “Assignment: Earth” is very intriguing, in a 1960s kind of way. Gary Seven is well-played by Robert Lansing, who demonstrates the necessary gravitas to portray the role of an alien-trained agent on Earth. Delightfully, he also seems to be in “on the joke,” and does a great job as a straight man, both for Garr and the cat, who are scene stealers. 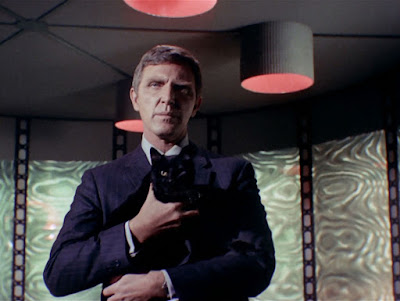 Teri Garr is our comic relief, and for me, her ditzy routine seems a little dated, today.  Also, it should be noted, Garr is apparently not a Star Trek fan (which is fine, of course), but that she once compared such fans to the people you encounter at “swap meets.”  I’m not exactly certain what she meant by that remark, but I’m pretty confident it’s an insult.  What she’s saying, basically, is a stereotype.
The concept of “Assignment: Earth” is good too; that advanced, benevolent aliens might send trained humans back to Earth to prevent us from annihilating ourselves. They are sleeper cell agents, in essence, but with good intentions.
Beyond these touches, Seven’s advanced tech, like the vault transporter, sonic-screwdriver-type pen, and hidden computer panel, are all a lot of fun.  They all hail from the colorful “super-spy” world of such programming as Man from U.N.C.L.E (1964-1968) and Mission: Impossible (1966-1972), but with elements of Trek and Doctor Who (1963-1989) thrown in for good measure. 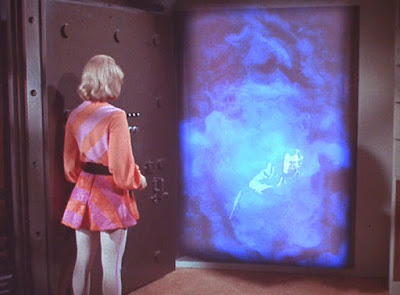 A downside of the premise, however, is that it goes against a key pillar underpinning Star Trek. And that pillar is, simply, that the human race outgrew our infancy on our own, and, in maturity, stepped onto the galactic stage (circa the 23rd century).  If aliens have been leading us by the nose all along then that accomplishment is undercut some.
As a Trek episode, alas, “Assignment: Earth” isn’t so great. In fact, the episode is weak. Kirk and Spock are relegated to supporting roles, and their involvement in the adventure begs questions.  Why is Starfleet undergoing the dangerous operation of time travel just for historical research?
The Enterprise’s mission sets up the story details (the interception of Gary Seven) but doesn’t seem to track with what we know of time travel. Stories such as “The Naked Time,” “City on the Edge of Forever” and “Tomorrow is Yesterday” strongly establish that time travel is dangerous and should therefore be a restricted activity.  I don’t know that “historical research” is a valid reason for such a risky operation.
I know it is impolitic to make such a remark, but I also find the climax of “Assignment: Earth” slow, and somewhat tedious. Kirk and Spock are held captive, restrained, in a control room for a while, and it seems to take forever for Seven to make the modifications on the rocket gantry.  It’s slow-going, followed by additional slow going.  Kirk and Spock are passive observers not only in the control room (before they do engineer their own escape) but in Seven’s office too, while he destroys the rocket in the atmosphere via his computer. 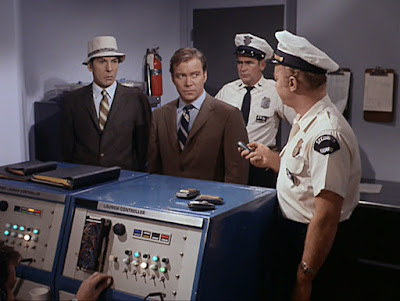 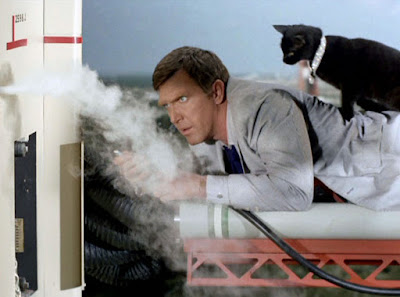 Finally, it rubs me the wrong way to have Spock inform Lincoln and Seven that they have several interesting adventures ahead of them.
First, in universe, this is flat-out wrong.
We have seen on many occasions that it is preferable not to influence people with knowledge of the future (see: Captain Christopher). Certainly, Spock -- of all the characters -- would be prudent about revealing such information.
In terms of the series’ integrity, the dialogue is also a mistake, as it seems Spock is speaking directly to the audience, endorsing the idea of a Gary Seven series.  It just feels a bit, well, cheap. More like marketing than actual drama. 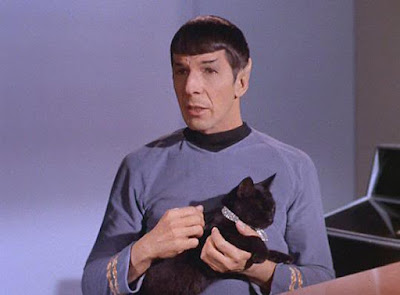 It is intriguing that Spock’s description of 1968 hits surprisingly close to the mark in terms of historical events (an assassination, and so forth), but I can’t state that this is a reason to recommend the episode, or judge it as a success.
Finally, “Assignment: Earth: features one interesting connection to future Trek lore worth writing about. Gary Seven “beams” across star systems at the start of the hour, and that’s transwarp beaming in a nutshell.  Transwarp beaming plays a major role in the Kelvin universe, in Star Trek (2009) and Star Trek: Into Darkness (2013). I have read many Star Trek fans complain about this dramatic device or gimmick, but “Assignment: Earth” clearly sets up the possibility, and the possibility in the 23rd century era of Kirk and Spock.
at September 08, 2022