Star Trek Week: "A Piece of the Action"

Stardate: 4598.0
The U.S.S. Enterprise travels to the M-class planet Sigma Iotia II, last visited by the starship Horizon, a century earlier. That starship reported that the denizens of the planet were bright, and extremely imitative.
When Captain Kirk (William Shatner), Mr. Spock (Leonard Nimoy) and Dr. McCoy (De Forest Kelley) beam down, they find out just how bright and imitative the people are.
Influenced by a book left behind the Horizon crew -- Chicago Mobs of the Twenties -- the inhabitants of the planet have modeled their entire existence after the gangsters of that decade. It’s a world of Al Capones!
Kirk realizes he must undo the “contamination” caused by the Horizon, and sets about to re-organize the planet into something less blood-thirsty and chaotic.
Still, it will take an act of herculean strength (and patience…) to rally the mob bosses of the planet, including Bela Oxmyx (Anthony Caruso) and Jojo Krako (Vic Tayback).
To achieve this end, Kirk realizes -- to Spock’s chagrin and dismay -- that he must out-gangster the gangsters. As I’ve written before, Star Trek (1966-1969) appears to have become intrinsically more formulaic and repetitive in its second season.
This span saw the “galaxy destroyer” stories (“The Doomsday Machine,” “The Changeling,” “The Immunity Syndrome,” and “Obsession,”) and the parallel Earth stories (“Patterns of Force,” “Bread and Circuses” and “A Piece of the Action.”)
In the case of the latter formula, the stories involved the exploration of planets that were perfect “parallels” to specific societies of cultures on Earth, like Ancient Rome, Chicago of the 1920s, or Nazi Germany.  This type of tale was a cost-saving expedient that allowed the production team to re-use (inexpensive) studio settings and costumes, created for other films and TV programs. The problem was (and is) that there is no consistent scientific explanation, typically, or rationale, for the parallel worlds (until "The Paradise Syndrome).
At least "A Piece of the Action" comes up with a reason why a world would develop in such an identical, or parallel fashion: cultural contamination. 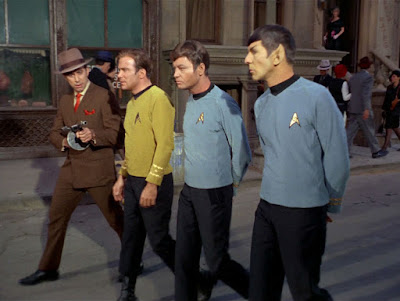 thus “A Piece of the Action” may be the best of the not-great “parallel Earth” bunch (which could also include the first season episode “Miri,” I suppose). I make this assessment not because of the admittedly hokey humor and hammy Shatner performance, but for two reasons.
First, the episode carries a deep and sharply satirical sub-text about the pitfalls of organized religion.
And secondly because the episode is, surely, the inspiration for the fish-out-of-water humor of Star Trek IV: The Voyage Home (1986), arguably the most unique of the Star Trek original cast features.
Let’s talk about satire first. “A Piece of the Action” is a cautionary tale about what happens when a culture models all behavior on the writings in a single text or book.  In this case, that book is a history tome about gangsters in Chicago of the early 20th century.  But in the case of reality, we see that all the major world religions, basically, carry a “holy book” which is to be obeyed, and in many cases, taken literally. 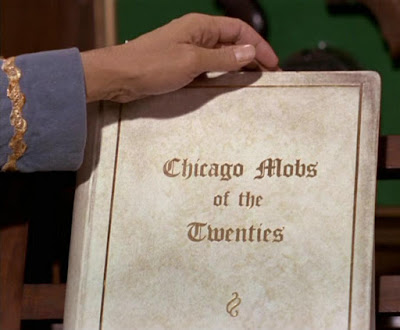 The belief in the “truth” of this book (and its wisdom as a way of life) has led some people, in some cultures, to reject scientific theories (evolution) and even scientific fact (the fossil record, for example).  It has led other people to hate and judge other people, namely homosexuals, based on a possibly corrupted interpretation of one passage (in Leviticus).
Now, the idea is not that books -- including holy ones -- can’t provide wisdom and guidance, or share history and knowledge.  Rather, it is that using one -- and only one -- book as the basis for every aspect of civilization is, well, limiting (if not downright crazy).
Consider the Iotians. They are smart, resourceful, clever individuals, and they squander all those natural resources on petty mob-land hits and useless, repetitive violence. Citizens suffer and die on the edicts of the book, not because the book is “bad,” per se, but because it has been interpreted literally as the foundation of a culture.
If “Return of the Archons” was Star Trek’s deadly serious indictment of religion as mind-numbing and dogmatic, “A Piece of the Action” is the series’ brutal satire about those who would rather let a book do their thinking for them, in the face of scientific fact; in the face of reality and reason, actually.
Lest anyone suggest I am reading too deeply into the episode, consider that both the Christian Bible and Chicago Mobs of the Twenties are sometimes referred to as “The Book.”  And consider also how those indoctrinated into organized religion -- and the Iotians living the mobster life -- respond to frank, analytical discussion of “The Book.” It is considered an affront to insult "The Book," or for that matter, rationally discuss or question what it has to say.
Although some of the humor -- and delivery of that humor -- in “A Piece of the Action” is cringe-worthy, I’ll go out on a limb and suggest that this episode is the most consistently and purposefully funny of Star Trek’s three second season comedies, the other two being “I, Mudd” and “The Trouble with Tribbles.”  The episode is both funny, and a scathing, spot-on critique of religion, and those who would take Holy Books as gospel, literal truth. 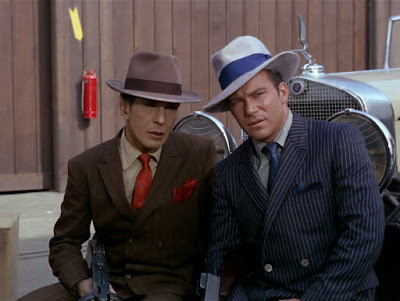 “A Piece of the Action” also predicts and spearheads the style of fish-out-of-water humor that is so beloved in The Voyage Home.
In both situations, Kirk and company attempt to mirror the verbal intricacies of slang from an earlier age of human development (the 1920s; the 1980s).  In both situations, Spock shows a distinct lack of ability to deal with “colorful metaphors.”
Also, in both situations, the Enterprise crew must accomplish a mission of planetary significance, while blending in with “the native” population.  Here, it is especially enjoyable to watch Spock contend with Kirk’s very poor driving of an automobile.  Also, Scotty’s (poor) attempts to ape 1920 gangster lingo are priceless. If there is any single distasteful aspect of the episode, it is likely the gunboat diplomacy angle. Kirk becomes boss, or top dog, on the planet, by using the ship’s phasers on a whole street block.
The action is justifiable, given that it was the Federation/Starfleet that caused the planet to develop strangely in the first place, but it is always unfortunate to see a Star Trek episode’s climax rely on the fact that the Enterprise possesses superior weaponry.
at September 07, 2022