Stardate 3087.6
While exploring an uncharted solar system, the Enterprise seems to “wink out” of existence momentarily, as though all of existence is unraveling.
Mr. Spock (Leonard Nimoy) localizes the “rip” in space-time to a nearby planet, and Starfleet Command fears an invasion of the galaxy may be imminent.
Upon beam down to the planet, Captain Kirk (William Shatner) encounters a humanoid named Lazarus (Robert Brown), who may be insane. Lazarus is hunting through time and space for a “monster,” he insists, one who could destroy all of reality itself.
After some time puzzling through the mystery, Kirk and Spock learn the truth.
Lazarus is hunting an anti-matter duplicate using his time-space ship.  He requires the Enterprise’s Dilithium crystals to power his vessel, and trap and battle that duplicate.
The command crew comes to realize that both matter and anti-matter versions of Lazarus must remain trapped in a “dimensional corridor” -- a kind of gateway separating the two universes -- for all of time, if reality is to remain whole. 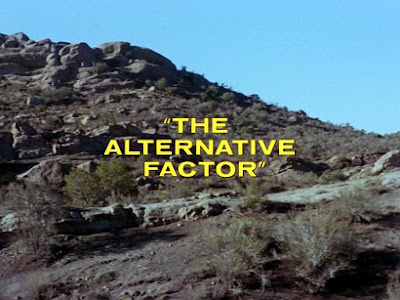 If there is one less-than-successful episode in Star Trek (1966-1969) season one, it would have to be “The Alternative Factor.”  The episode lands smack-dab in a run of great, classic shows, and stands out for not being of apiece.
There are no doubt hard, fast reasons why the episode is seen as an ambitious failure by many fans.
For example, the actor originally cast to play Lazarus, John Drew Barrymore, did not show up to play the part on the first day of shooting.  Robert Brown replaces him on-screen and does a quite creditable job in a difficult role. 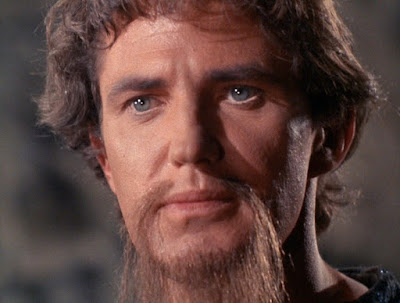 But the upshot is that the episode was clearly made under the gun, and with difficulties.
Similarly, the episode’s concepts -- though relatively straight-forward – often transmit as muddled and confused.
The matter and anti-matter Lazarus are often depicted switching places, with a head-bandage as the only visual cue, for example, of which individual we are "seeing." Spock comments on the bandage,  and the two Lazarus versions during a briefing room scene that seeks to explain the story, but it is baffling why he does not bring up the issue sooner, given its importance.
Also, each Lazarus instantaneously replaces the other during the rip in space sequences, at least to our eyes.  So the question becomes:, how can they ever meet if they spontaneously transpose in this fashion, simply flip-flopping one universe to the other?
The upshot, I fear, is that we never quite know which Lazarus we are dealing with, what the stakes are, and how everything works.
His fate is fascinating (and horrifying) but Kirk’s repeating of the line “and what of Lazarus?” in the coda is over-operatic. Lazarus is not a character we have fallen in love with, and the episode works extra hard (hence the repeated line) to make certain we understand the character’s sacrifice.
Also, this is an episode in which it feels like our crew is playing guest roles. They stand-by and attempt to figure matters out, while Lazarus does his work to save reality. Kirk gives him a hand in the last act.  But imagine how much more immediate the story would feel if Kirk -- or someone aboard the Enterprise -- had to step in and battle the evil Lazarus for all eternity?
Ultimately, as I said, we just don't care enough about Lazarus to be crushed by his fate.
And finally, the wink-out effects are pretty lame. A beautiful image of a galaxy is simply superimposed over a shaking, quaking ship. 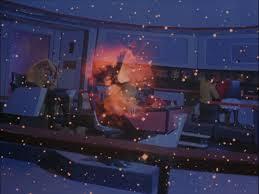 Despite these issues, I must admit that I boast a real fascination with “The Alternative Factor.” It is a story that is filled with so many ideas.  True, they tend to be half-developed, but still...
First, I really like the design of the one-man time ship. It’s a single-seater saucer, with a transparent bubble dome and a nifty cockpit. It must also be incredibly powerful, considering it eats up Dilithium crystals.
It sparks my imagination to think of Lazarus using this device for a life-time, chasing his “negative” mirror-self across time and space. 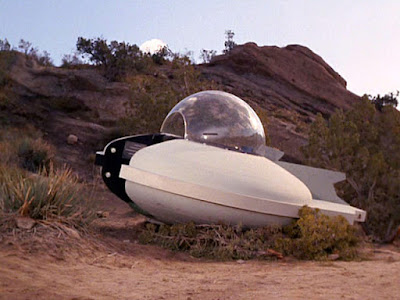 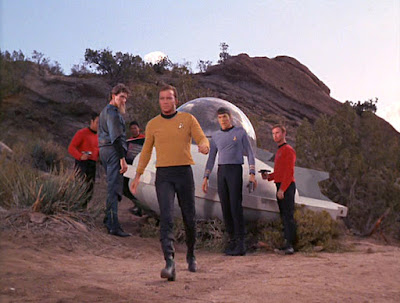 Secondly, I enjoy the “mythic” nature of the story. Remember, Star Trek is quite intentionally a secular adventure. Gene Roddenberry was an avowed atheist, and looked to eschew religious trappings in the series.
Accordingly, “The Alternative Factor” goes to great lengths to create a secular, scientific version of Hell.
Think about it: the two, opposite versions of Lazarus will live forever, outside time, at each other’s throats, so that the universe might live.
That dimensional corridor is thus a scientific version of Hell: a place of eternal suffering and damnation for those trapped there. I find it fascinating that a secular version of damnation has been proposed, and conceptualized by the series. 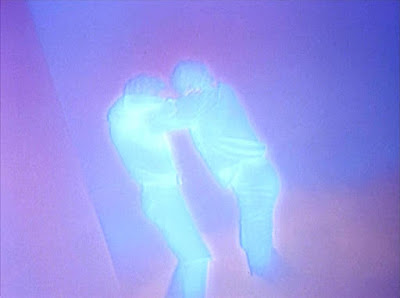 The fate of Lazarus, to fight with his opposite for all eternity reminds me, specifically, of the (afterworld) fates of such mythic and literary characters as Sisyphus or Tantalus.
Lazarus, of course, is named after a Biblical character, one raised from the dead by Jesus. The character appears in the Gospel of John (11:1-44, 12:1-11) and is known as Lazarus of Bethany. In Scripture, Lazarus represents Jesus’s ability to perform miracles, and in particular, conquer death itself.
Though not in a way of his choosing, no doubt, Lazarus in Star Trek also escapes death. He lives forever…though in ostensible torment.
I am also fascinated by the structure or “reality” as suggested by “The Alternative Factor.”
Our dimension is pushed up against another, anti-matter dimension, and only the bottle-neck or dimensional corridor keeps them from annihilating one another.
This idea strikes my imagination as well.  I would love to know if there was an ‘intelligent design’ behind this structure preserving two realities.
And if there are other dimensions in existence, do they also have this structurally-vital escape valve protecting them?  I would love to see a scientifically-grounded but speculative (and yes, spiritual) Star Trek story about a ship exploring these two particular realities. How did the corridor come to exist? Is it a natural occurrence? Put there by some cosmic intelligence?
I realize that sounds more like the perfect Space:1999 story, but I still find it fascinating to speculate about.
Another one of the ideas that fascinate me most about the story, however, involve Lazarus’s background. He is a brilliant scientist who discovers parallel dimensions and grows insane when he realizes that he is not unique; that each dimension contains a “version” of him.  He loses his mind and wants to wipe out all other “versions” of himself...ostensibly because he is no longer unique.  He becomes genocidal, a maniac.  Again, a Biography/History novel of Lazarus’s life would, to me, make fascinating reading.
Certainly, one can make the following claim about “The Alternative Factor.”  As wordy and as muddled as it remains, it introduces a number of fascinating concepts to the Trekverse.
Not the least of which is parallel realities. A better meditation on that theme is season two’s “Mirror, Mirror.”
Still, what of "The Alternative Factor?"
at September 06, 2022