Stardate: 2534.0
In the M43 Alpha solar system, the Enterprise travels in search of a missing Federation history professor whom Captain Kirk (William Shatner) once admired: John Gill.
The Enterprise approaches the M-class world Gill was last known to be studying -- Ekos -- and Kirk is surprised to see the ship fall under attack from a missile. The Enterprise avoids destruction, and closer examination of Ekos reveals a horrifying discovery.
The world has been transformed into a planetary Nazi regime, presumably because of Gill’s interference, and is now launching a “final solution”-style genocide against its peaceful neighbor world, Zeon.  Kirk and Spock (Leonard Nimoy) must undo Gill’s interference on the planet and save Zeon.
They join the resistance to do so, and learn that John Gill is the “Fuhrer” of this alien Nazi state. 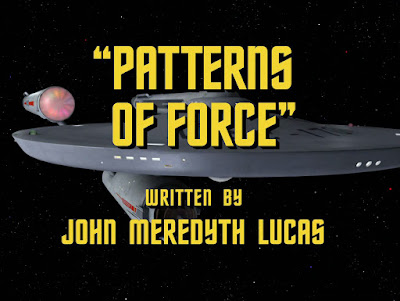 Star Trek’s (1966-1969) “Patterns of Force” is a cautionary tale of vigilance, and one that reminds audiences that a hostile ideology rooted in guter emotions like hatred, resentment, and scapegoating can crop up anywhere, at any time. We are never safe from it. Especially if we forget our history.
The Nazis can rise in the 23rd century on the distant world of Ekos, for example, or even right here, in America, 2022.  This is why vigilance is a responsibility and duty of every citizen. Just this weekend, a Hitler impersonator was praised at a rally for a presumptive presidential candidate. Who says Nazism is dead in America?  Who can say it will stay dead, if we are not vigilante?
The antidote to such terror is the very thing we witnessed in the 1940s, and Star Trek shows us a corollary in “Patterns of Force:” allies of diverse backgrounds and beliefs banding together to stop this nativist, racist form of evil. 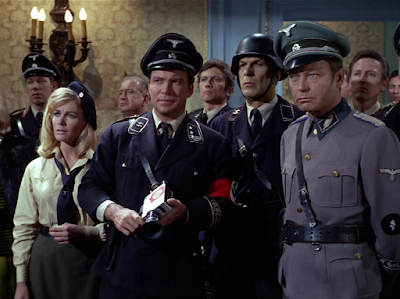 In “Patterns of Force,” Kirk and Spock join the resistance, which sees both prosecuted Zeons and good-hearted Ekosians rebelling against the evil regime.  People of good conscience fight what they see as a betrayal, essentially, of human decency. The Ekosians want their world restored. Zeons want the attacks to end.  Their differences in nature (being from different worlds) don't prevent them from joining forces and fighting the Nazis.
Yet the story of John Gill is, perhaps, a perplexing one, and Kirk actually acknowledges this fact in-story. Gill states that “even historians fail to learn from history,” and yet it is a total mystery why Gill picked Nazi Germany as a “model society” to impress upon the Ekosians. How could anyone make such a catastrophic misjudgement?
As if in support of Gill’s theory (though of course not his actions...), Spock notes in the episode that Nazi Germany was the “most efficient state” ever known on Earth. Sadly, this is “fake news,” to coin a phrase, and a comment which prominent historians have widely debunked.
Nazi Germany was a bureaucratic nightmare, apparently, because each leader felt that he held more power, and had more jurisdiction, than he actually did; thus creating an environment of competition, backbiting, and in-fighting. Hitler himself was reputedly quite disorganized.  So Gill’s notion of Nazi Germany as an ideal, or super-efficient state is more fiction than fact. The Roman Republic (pre-Empire) might actually have been a preferable model for state-run efficiency, though there are Roman influenced societies in Star Trek already, including in “Bread and Circuses” and the Romulans. 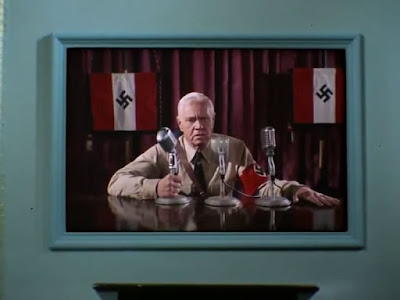 But how could any self-respecting historian possess  the arrogance, or vanity, to believe he could impose a “good” Nazi society on another one? Not only is such an act a clear violation of the Prime Directive, it suggests a bad mis-reading of history, or at least an extremely…selective reading of it.
Why? Well, what actually held Nazi Germany together? The historical record tells us it was a constant state of warfare, nationalistic propaganda, and the scapegoating of populations that didn’t conform to Hitler’s preferences.  It’s difficult to see how these particular traits could be marshaled into a society that is benign, or benevolent.
I’m not complaining about the episode, and indeed, the whole idea is “baked in,” because of Kirk’s comment of bewilderment to Gill. We are left, simply, to wonder if John Gill went senile, and his dementia somehow played a role in his selection of Nazi, Germany as the paradigm for Ekos.
Gill’s plan skirts plausibility, and yet I nonetheless feel it is important for Star Trek to dramatize this particular story.
"Patterns of Force" reminds us that sometimes good people go along, at least for a while, as fascism rises.
It reminds us that even a technological, modern state can succumb to the worst aspects of human nature.
It reminds us that when we are faced with those in people who break the law and betray our human values, we can, in a word, resist.  We can call an insurrectionist an insurrectionist. We can call insurrectionists traitors, not patriots.
And "Patterns of Force" reminds us, finally, that if we must be ever vigilant, lest mankind make the same mistake all over again.  “Patterns of Force” is worthwhile for all such reasons. 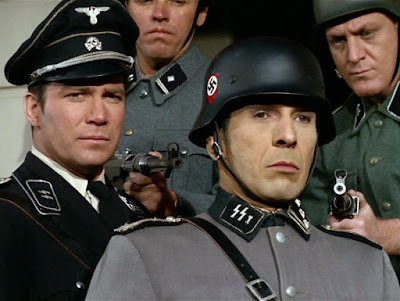 Given that the subject matter is so severe -- one scene includes dialogue about an innocent women, a Zeon, beaten to death, her body spat upon by Nazis -- it is a surprise to report that “Patterns of Force” also utilizes a good bit of humor, ostensibly so the going doesn’t get too dark.
Spock tells Kirk “You should make a very convincing Nazi,” for instance, in a perfect deadpan.  And Bones gets to pretend to be a drunk Gestapo doctor in another scene.  Kirk and Spock’s escape from a jail cell, with Spock babbling about scientific theory, and Kirk enduring great pain, is similarly amusing. 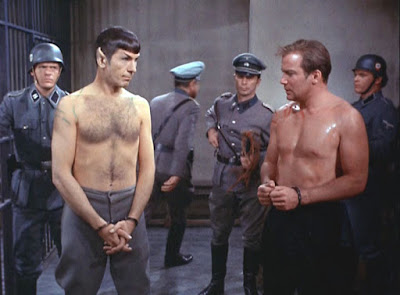 The subject matter is never treated lightly, but the episode’s seriousness is leavened just enough by the series’ quirky sense of humor.
In the second season of Star Trek, Kirk and the Enterprise crew keep encountering “cultural contamination.” In “A Piece of the Action,” a book from Earth about Chicago Mobs of the 20s changes the very face of a culture.  In “Bread and Circuses,” human beings from a spaceship end up as “barbarians” fighting in a modern Roman gladiatorial game.  And in “Patterns of Force,” of course, a historian exports the Nazi ideology to an innocent people.  In all such instances, Kirk investigates, and the wisdom of the Prime Directive is reinforced, I suppose one might conclude.
But there's another conclusion to draw as well.
If mankind is to touch the stars, he’s going to bring the worst angels of his nature (and history) with him, at least sometimes. But via the noble example of the Enterprise crew, we see that his best angels will be well-represented  out there, on the final frontier, as well.
at September 08, 2022