Stardate 5710.5
The U.S.S. Enterprise investigates a mysterious distress signal emanating from the planet Scalos.
There, Captain Kirk (William Shatner) and his landing party discover an empty, highly-advanced metropolis on the surface, even as Lt. Uhura (Nichelle Nichols) reports that she is still receiving the distress call, and seeing those who sent it -- on the view-screen -- at Kirk’s position.
After a crewman in the landing party named Compton (Geoffrey Binney) vanishes into thin air, Kirk and his team return to the Enterprise, unaware that they have brought with them a squad of “hyper-accelerated” Scalosians.
These Scalosians are led by beautiful Queen Deela (Kathie Brown) and her head scientist, Rael (Jason Evers).
Rael’s task is to rapidly convert the Enterprise into a “giant deep freeze” so as to preserve the crew for future breeding stock with the Scalosian women.  The men of the planet, it seems, are sterile and the race is dying off.
Meanwhile, Deela has selected Captain Kirk as breeding stock.
Contaminating his coffee with Scalosian water, Deela accelerates Kirk’s metabolism, and explains to him that the process weakens human cells, meaning he is susceptible to accelerated aging if his skin is scratched, or broken. This means, for Kirk, that any resistance to the Scalosian plan could prove fatal.
Meanwhile, Mr. Spock (Leonard Nimoy) and Dr. McCoy (De Forest Kelley) work on an antidote to the hyper-accelerated Scalosian water so as to heal Captain Kirk.
But they must act quickly, before the Scalosians activate their freezing device… 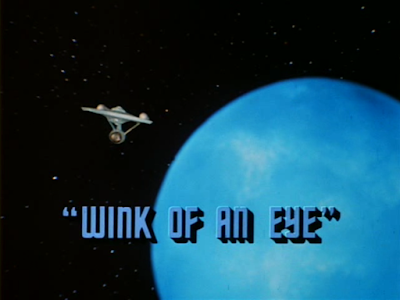 “Wink of an Eye” is an extremely memorable, if not extremely high-quality, episode of Star Trek (1966-1969).  The episode -- which features hyper-accelerated aliens attempting to take over the Enterprise -- is another “high concept” show in a season filled with high concept shows.
When producer Fred Freiberger took over show-running Star Trek in its third season, the ratings were low, the expenses were high, and the future of the series appeared grim.  Without additional resources, he must have been at a loss regarding how to “punch” up the series.
Accordingly -- under Freiberger’s tenure -- the series featured many stories that were extremely memorable or distinct in terms of their imagery and narrative, perhaps in an attempt to hook those elusive new viewers.
These stories were universally ambitious, but not all worked well. Consider: this is the season that see aliens steal Spock’s brain, features a look at Kirk with pointed ears (“The Enterprise Incident”), highlights black/white aliens (“Let that Be Your Last Battlefield”) and so forth. “Wink of an Eye” follows solidly in the tradition of a high concept show. The central hook is irresistible: aliens who move so fast that they are invisible to the naked eye. 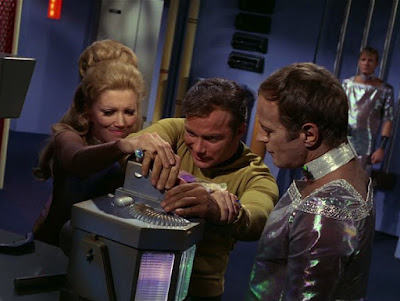 So, yes, “Wink of an Eye” is the Star Trek in which aliens invade the Enterprise, but you can’t see them…you can only hear the “buzz” of their hyper-accelerated dialogue.  To make the (high) concept even more appealing, we see an alien character (Deela) out-walk a phaser blast on the bridge, and a series of skewed angles to suggest the wonky, slo-mo transition from normal time to accelerated time.
By-and-large, these touches work to make “Wink of an Eye” unforgettable. There’s no other show in the canon quite like it, even though the tale of aliens taking over the Enterprise is fairly common (“By Any Other Name,” “I, Mudd,” “Day of the Dove,” etc.)
Enhancing “Wink of an Eye’s” distinctive nature, this episode also features the famous (infamous?) moment wherein we see Captain Kirk dressing after having sex with Deela. He sits on the corner of the bed in his quarters, and the audience sees him putting his boots back on.  For 1969, this is a fairly overt indicator they have just had sexual intercourse. Or to put it another way, this is the most overt indicator on the series that Kirk has engaged in intercourse (as Sheri points out, in an out-of-wedlock relationship; see "The Paradise Syndrome!") 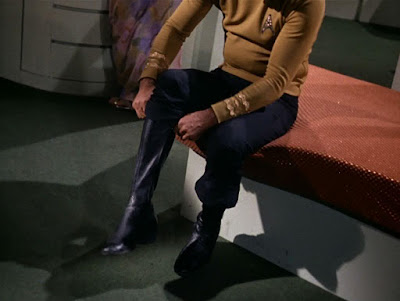 Again, these moments make “Wink of an Eye” unforgettable. But unforgettable doesn’t necessarily mean “great.” Specifically, the episode’s denouement proves mystifying. McCoy and Spock have developed an antidote that could restore Deela and her dying people to normal, but instead of sharing it, Kirk leaves the Scalosians stranded in hyper-accelerated time.
Why wouldn’t he offer these very human-like aliens the antidote? At this point, the Scalosians are no longer a threat.
Furthermore, if cured of their condition, they would have no further need to hijack and attack starships.
Instead of helping, Kirk says goodbye to Deela knowing that he could save her.
But he doesn’t save her.
Why?Does the Prime Directive apply here, and forbid Kirk from altering the "fate" of the Scalosians?  He certainly interacts with Deela...right?
The episode features some other problems regarding logistics as well. For instance, Kirk and Deela are not alone on the bridge when he fires his phaser at her. She steps aside easily. But wouldn’t Spock and the others see the bright green beam fired, even if it can’t see the persons firing it, or being fired at?
Also, phaser beams are amplified, concentrated columns of light, right? Don't these rays emit...at the speed of light?  If so, I don't care how fast Deela is...she would still get hit by the phaser beam.  Still, the special effects look great in this scene. 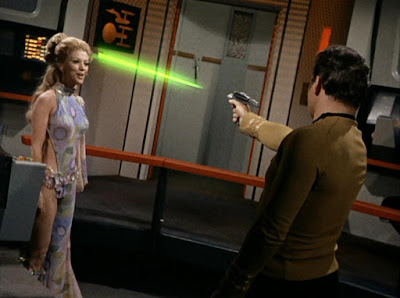 Similarly, wouldn’t the automatic doors aboard the Enterprise constantly be opening and closing (for no apparent reason…) when the accelerated Scalosians use them?  Or do the Scalosians just jump through open doors when non-accelerated people are already walking through them?
It also seems weird to me -- at least in 2017 -- that so much time is spent during the episode on the Enterprise crew puzzling out that the Scalosian message is recorded, and not live. This would have been an obvious conclusion, even in the 1960’s or 1970’s. 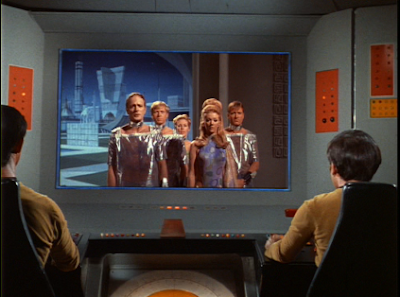 Fortunately, “Wink of an Eye” is a high-concept show, and a sexy one too. It moves effortlessly and with great pace, even if, at times, one stops to question the science, or the character motivation (particularly Kirk’s).
at September 09, 2022