Star Trek Week: "Is There in Truth No Beauty?"

Stardate 5630.7
The Enterprise is tasked with transporting Ambassador Kollos of Medusa to a Federation summit. Kollos, and all Medusans are non-corporeal life-forms who are renowned as the galaxy’s greatest navigators.
However, if a human should ever gaze upon a Medusan, he or she would be driven permanently insane. Fortunately, protective visors can prevent such happenstance, and allow the races to co-exist and cooperate.
Two other passengers beam aboard the Enterprise with Kollos.
The first is Dr. Miranda Jones (Diana Muldaur) an accomplished telepath who has been selected to undergo the first human/Medusan mind meld or link.
The second is Larry Marvick (David Frankham), one of the designers of the Enterprise. His job, if Dr. Jones is successful, is to incorporate instrumentation aboard starships for linked Humans/Medusans.
Captain Kirk (William Shatner) hosts Dr. Jones and Mr. Marvick at a dinner, but Miranda feels threatened by Mr. Spock (Leonard Nimoy), who was the first choice to undergo the mind-link process. He intends only to honor her at the affair by wearing the Vulcan IDIC medallion, but Miranda is defensive and suspicious.
Things go from bad to worse when Marvick -- in love with Miranda -- attempts to assassinate Ambassador Kollos. Instead of succeeding, he views the Medusan without protection, and goes insane. He visits Engineering and while there seizes the controls, trapping the Enterprise in a strange, distant void.
Mr. Spock realizes that only an expert navigator, like Kollos, can help the ship to return to its proper place in the universe. To accomplish this task, however, he must mind-link with the ambassador, and Dr. Jones will be quite unhappy at the prospect.
Captain Kirk distracts Miranda with a walk in the ship’s arboretum, while Spock makes the link without her knowledge.
The ship is rescued, and returns to its original point in time and space, but an accident occurs after the transfer, which leaves a vulnerable Spock -- sans visor -- to view Kollos with his own eyes. Now Miranda, who has been deceived, must decide if she should help restore Spock’s mind. 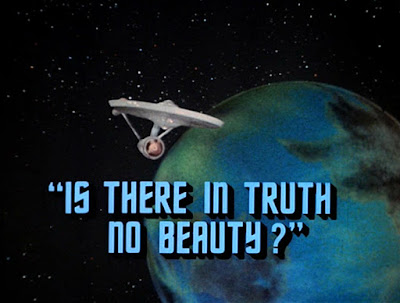 “Is There in Truth No Beauty” is a good reminder of just how ahead of its time Star Trek (1966-1969) was when it first aired.
This story features a brilliant, complex female character, Dr. Miranda Jones (Diana Muldaur), who is dedicated to her own professional success and doesn’t require or want the permission of a man to pursue her goals. 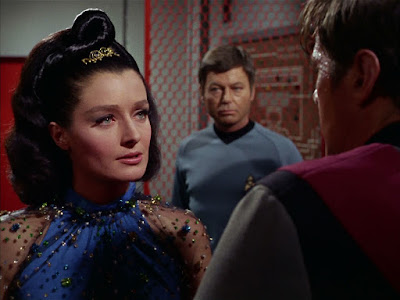 It’s true that Kirk, Bones and Marvick fall all over themselves discussing her “beauty,” but the episode’s teleplay is clear that Jones is an accomplished individual in her chosen field.  Sure, she possesses foibles; just as Kirk, Spock and McCoy do, but Miranda is a three-dimensional character, not merely “eye candy.”   The episode’s symbolism suggests that all roses possess thorns, and it’s easy to apply that ideal to Miranda and her fits of rage and jealously. But the intriguing there is that the comparison applies, in various ways, to Kollos, and even Marvick.
Kollos is a good soul, of course, not meaning to do harm. But his “thorn” is the damage his appearance can do to those around him.
Marvick is clearly a genius -- the man who designed the Enterprise and is working on instrumentation for Kollo -- but his thorn is also “jealousy.” He is in love with Miranda, and covets her.
Incidentally, Miranda is also blind, but she does not allow that so-called “disability” to stop her from achieving her ambitions.  And, the sensor-dress that Jones wears in this episode is clearly a precursor to Geordi’s visor in The Next Generation (1987-1994) as well as a prime example of Roddenberry’s “Technology Unchained” theorem; the idea that advances in technology will improve all facets of human life.
It is easy, in 2017, to look at this episode and find it in sexist since Kirk, McCoy and Marvick are so concerned with Miranda’s beauty, not her intellect, or even her prerogative to decide her life for herself.
Marvick’s line to Miranda to be a “woman” for a change is absolutely sexist too (just as the term “mansplaining” or “man up” is also sexist, in today’s world), and Kirk and McCoy’s concern for Miranda’s happiness is a bit overwrought. I think that’s to be expected in the third season of Star Trek. Everyone seems to be falling in love, all the time, at a far greater rate than in the previous two seasons.
But right there, in the text of the episode, Miranda gives it right back to the men. When McCoy toasts Miranda, he asks if those attending the dinner will allow so beautiful a woman to be surrounded by ugliness her whole life. Miranda responds with a sharp toast of her own, noting that those in attendance should also not permit McCoy, so lively a personality, to surround himself by disease and death.
Touché!
Miranda reserves for herself only the privilege McCoy reserves for himself: the right to choose how she lives her life, and pursues her dreams. That is what equality is; and that is what “Is There in Truth No Beauty” is about.
The episode also presents, for the first time, the Vulcan concept of IDIC. The story of the IDIC pendant is legendary, of course, an opportunity for crass commercialism. 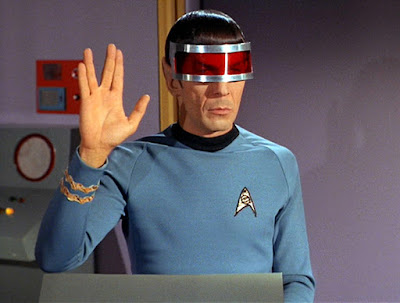 But the concept behind IDIC -- infinite diversity in infinite combinations -- is beautiful in its thinking. In fact, it was one of the key ideas that makes Star Trek so worthwhile: the concept of people of different backgrounds, cultures, genders, beliefs, and attitudes combining their efforts to do something great, or worthwhile, like explore the galaxy.  When one gazes at the various Star Trek crews from 1966 to 2005, we see the practicality, the necessity, and indeed, the beauty of the IDIC concept. 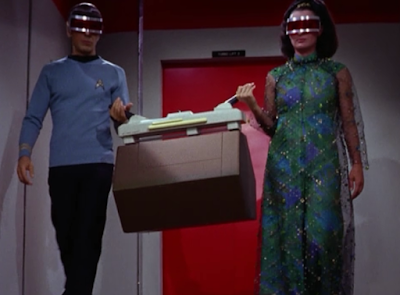 It is still amazing to me that this program that aired in the mid-1960s was so forward thinking about diversity, and its benefits to everyone.
During the Civil Rights movement, it brought us an African-American female on the bridge of a starship. During the Cold War, it brought us a Russian to the same bridge. And, when those with a long memory still hated the United States’ previous enemy from another war, it also gave us a Japanese helmsman. “Is There in Truth No Beauty” reminds us, additionally, that those who face physical challenges (like blindness), can also be valuable, productive members of society.
This was by no means a mainstream view in 1968-1969.
Even the idea that Kollos is accepted by Starfleet and the Federation -- while still considered “ugly” -- speaks well of Star Trek’s commitment to the concept of IDIC.  Kollos’ appearance causes madness and death in humans, and yet he is nonetheless considered a valuable ally, one who, with the right precautions, would also have a seat on the bridge of a starship. 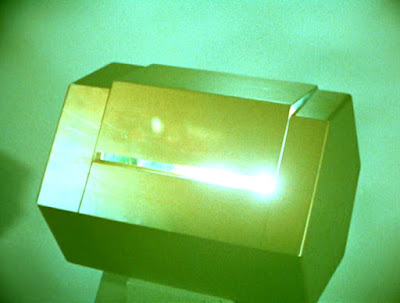 This episode is nearly never referenced when discussing Star Trek’s finest episodes, and yet consider what it accomplishes. It sets out the foundation of a beloved Vulcan philosophy (IDIC), and it forecasts the future of the franchise, with the sensor web leading to La Forge’s visor in The Next Generation.
It’s true that some elements of the episode seem over-the-top -- each time Kirk and McCoy are in the presence of Miranda, for instance -- and yet some moments are quite beautiful too, particularly Leonard Nimoy’s performance as the Kollos/Spock union. Muldaur, once more, is extraordinary in terms of crafting a fully-realized character who seems to have a history and background beyond what we see on the screen.
So, I suppose we can remember the episode’s point: every rose has its thorns. 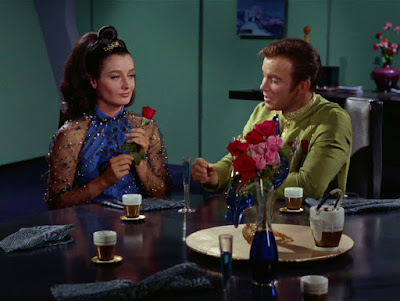 Despite those thorns, I would still count this as a top-tier third season episode of Star Trek.
at September 08, 2022