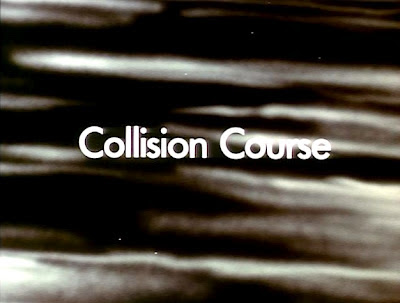 For those unacquainted with it, magical realism is a story-telling approach in which something seemingly impossible (hence magical) occurs in an otherwise very real setting.

In “Collision Course” the laws of Physics as we understand them are held in abeyance so that a dramatic (though magical...) reckoning, apotheosis, or sense of transcendence can be depicted. 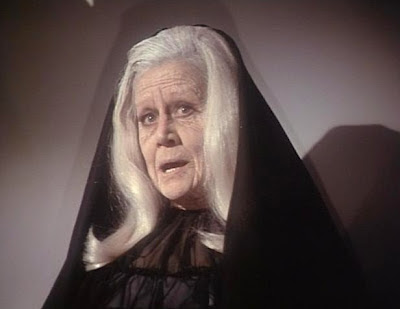 “Collision Course” begins in media res as Moonbase Alpha very narrowly avoids a collision with a nearby asteroid by detonating small nuclear charges on its surface. The mission is a success of sorts, though a thick radioactive cloud hovers over the base, with possibly deleterious effects on humans.
Meanwhile, pilot Alan Carter (Nick Tate) is missing in action. A mysterious alien intelligence named “Arra” (Margaret Leighton) however, guides Alan safely to a rendezvous point in space with Koenig’s rescue Eagle.

From that vantage point, at the rim of the radiation cloud, Koenig detects a new danger. A planet thirteen times the size of Alpha is now on a collision course with the wandering moon. Only hours remain before total annihilation.
Professor Victor Bergman (Barry Morse) proposes Operation Shockwave, a mission to drop nuclear charges on a path between the two planetary bodies in hopes that the resulting nuclear detonation will pull them apart and spare both worlds from destruction.
But soon, Koenig encounters Arra himself and he faces a new set of variables. The alien queen informs him that it is her world, Atheria, which now approaches Alpha. Furthermore, the approaching collision is the very catalyst her people have sought and awaited since the dawn of time. The collision will trigger in them a total metamorphosis, a next step in their species’ evolution.
Arra also guarantees that Moonbase Alpha will survive the collision unscathed, noting that it’s odyssey will “know no end” and that mankind will prosper in new solar systems for ages to come.

Koenig takes Arra at her word, but how can he convince his top staff -- rational and logical scientists all -- that they should do nothing in the face of imminent disaster?
In large part, this episode of Space: 1999 concerns faith. Not religious faith, necessarily, but perhaps the faith in an understanding beyond our own; that things aren’t always exactly as they first appear, and that we don’t always have all the answers. Rushing to judgment serves no one.

"Collision Course" thus concerns a human value: trust.  It’s the battle between human and machine values perhaps, and one that explicitly fits in with what Science Digest tagged as the series’ central thesis: the downfall of 20th century, technological man. 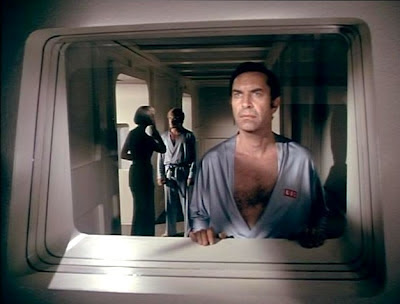 The idea underlying this concept is that we don’t know everything ,and when we forsake human values for a reliance on technology, the outcomes may not be the ones we desire. This idea is encoded in  the opening episode, “Breakaway,” which features a nuclear accident, and sends the moon (and Alpha) careening into space.
In real life, I’m not generally a big fan of faith-based decision-making. We use facts and science as our guides to make the best decisions we can. It’s only logical. But what “Collision Course”  explores is the notion that trust is a critical factor too, in decision-making.

If you understand that someone knows more about a situation than you do, and you indeed trust them, then the question becomes: is that enough to outweigh the available facts?

The harsh lesson for Commander Koenig is that his people are limited in some sense, by the (technological) world view which shaped them, and that even the quality of loyalty (to him) is not enough to make them forsake science, rationality, and logic in the face of fear and apocalypse.

Again, I don’t interpret this episode as being a blanket approval of blind faith, but rather the importance of “seeing” faith, let's call it.  Koenig comes to trust Arra after their meeting, and places his faith in her after assessing her, person-to-person..

His people on Alpha -- though they know him better than he knows Arra -- are not able to place this kind of faith in him. Koenig understands the situation well and harbors no anger, as the coda suggests. Were the situations reversed, he asserts, he would likely not be able to do “nothing” in the face of certain disaster, either.

Accordingly, the story becomes a comment on the qualities we see in all human-kind, not just Koenig or the Alphans.
One quality I appreciate about “Collision Course” is its sense of humility about human nature. Here, a benevolent alien teaches the human race something wondrous about the universe, a reality that goes beyond man’s limited understanding and science.

I like the fact that the Alphans are allowed to be wrong in this case, and yet that they are learning as opposed to lecturing or teaching others about their values.  Johnny Byrne, Space: 1999's story editor, once told me that great drama emerges not from an exploration of characters who already have all they need, but from an exploration of those who don't. Here, the Alphans lack knowledge about deep space, and so are afraid and act fearfully.
As we expect from Space: 1999, “Collision Course’s visuals are vivid and powerful.  The first acts of the program showcase a sense of confusion and dread, for instance.

First, Moonbase Alpha is blanketed in an impenetrable haze, unable to see or understand anything happening around it.

Later, Koenig pierces that haze and find signs only of death and doom.  Arra’s ship devours his Eagle in a sense (the fore opens like a shark’s jaws…) and Koenig finds her ship to be something like a tomb, replete with cob-webs and an ancient figure garbed in a funeral cloak or shroud.

Whether this is Arra’s real form, or Koenig’s perception of her form -- based on his own fear of impending doom -- is questionable.
Finally, the episode ends with that touch of grace and transcendence, with that touch of magical realism.  Atheria and Alpha careen towards one another and all appears lost.  But the planets don’t collide.  Instead they merely touch, and Arra and her people apparently “evolve” to the next level of their existence.

There’s no existing scientific theory, principle or axiom, to my knowledge, that could explain why these two space bodies touch instead of collide.

But the episode  surprises with its fanciful, even chimeric sense of wonder or vision.  There are some things man does not yet understand, the episode expresses, and sometimes it’s necessary not to rage against the fantastic or otherworldly, but to put faith in a friend. Arra speaks of history, foreknowledge, and sacred purpose of mankind, and her vision proves correct, even if "fear" precedes apotheosis.

I can’t claim I would always want or desire Space: 1999 to exist on this rarefied plateau of magical reality, because then hard-edged science-fiction becomes a very different animal: phantasmagoric storytelling with no rules, where anything is possible (and thus valid).

But in the case of “Collision Course” I’d submit the episode works as a one-off, re-asserting in dynamic visual and narrative fashion the idea that mankind is sometimes the victim of a sort of a tunnel vision, seeing only part of the picture and ignoring the rest.  There are more wonders in Heaven and Earth, “Collision Course” suggests, than is dreamed of in our philosophy (or by our technology).