Stardate: 3372.7
Aboard the U.S.S. Enterprise, Dr. McCoy (De Forest Kelley) urgently confers with Captain Kirk (William Shatner) about some uncharacteristic behavior by Mr. Spock (Leonard Nimoy). Kirk witnesses some of that behavior, himself, and soon asks Spock what is wrong.
At first, Spock will not explain sufficiently, and simply demands that he be allowed to take shore leave on his home planet, Vulcan. Kirk complies, but new orders from Starfleet promptly assign the Enterprise to a presidential inauguration in the Altair system.
Spock orders the ship to change course for Vulcan, over Kirk’s orders, and Kirk demands that Spock explain the situation.
With great difficulty, Spock reveals information to his captain about the Vulcan condition of “Pon Farr,” wherein Vulcan adults must -- every seven years -- return to their home world…to mate or die.
When McCoy reports that Spock will die in seven days if not returned to Vulcan, Kirk realizes that there is much more at stake than his career. He changes course for Vulcan to save Spock’s life.
Once in orbit around Vulcan, Spock requests the presence of Kirk and Spock at his wedding ceremony to his betrothed, T’Pring (Arlene Martel).  The three men beam down together, and Kirk is surprised to see the respected Vulcan diplomat, T’Pau (Celia Lovsky) in attendance at the ceremony.
During the ceremony, with Spock deep in the “plak tow” -- the blood fever -- T’Pring chooses challenge over marriage.
And she chooses Captain Kirk as her champion. Afraid to back out, Kirk does not realize that the challenge involves a battle to the death.
“Amok Time” may just be the single greatest episode of Star Trek (1966-1969) produced. 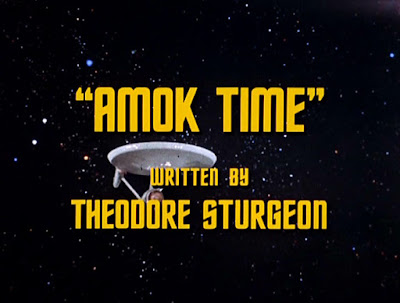 The second season premiere is funny, emotional, exciting and, at times, genuinely shocking. There is also, not surprisingly given the subject matter, some degree of eroticism involved as well.
Most significantly, however, the episode reveals new, very personal information about Mr. Spock (and Vulcans in general), and showcases, to great effect, the Kirk-Spock friendship. Here, Kirk puts his very career as captain of the Enterprise on the line to save his friend’s life. He does so without looking back, or second-guessing.  Instead, he notes simply, that Spock has saved his life more times than he can count...and that's a debt that means more than a career does.
And the expression of relief and joy Spock’s face when he learns that Kirk is not dead is, surely, one for the ages.
That coda is one of the most unforgettable and beautiful moments in all of Star Trek. 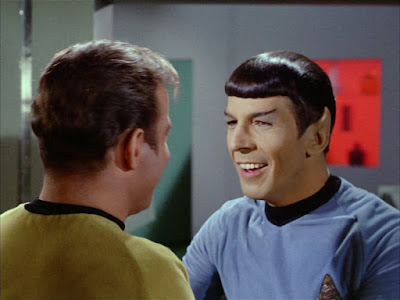 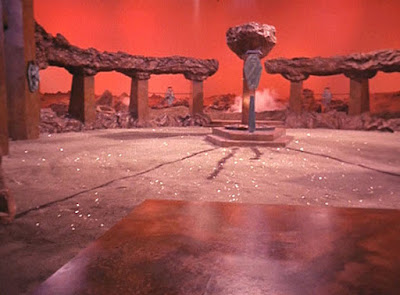 Much more intriguing, however, are the glimpses of Vulcan biology and cultural ceremonies.
On the former front, “Amok Time” establishes a key piece of Vulcan lore: Pon Farr. 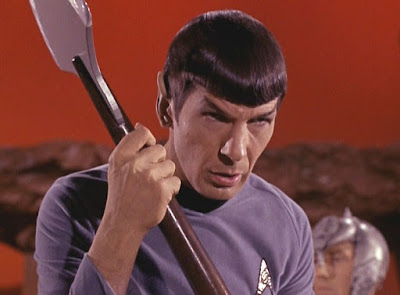 This is the natural instinct and drive to mate, which Vulcan adults experience every seven years.
They can engage in sexual intercourse at other times, of course, but they must periodically return home to Vulcan, to “spawn” or “die,” in the episode’s lingo. Spock explains the details of Pon Farr with great discomfort, and Kirk hears those details with an equal level of discomfort.
As a longtime Trek fan, I love watching Shatner and Nimoy perform these uncomfortable scenes together, as Spock tries to provide as little detail as possible, and Kirk attempts -- with that very little bit of detail -- to understand fully what his first officer describes. These two men are friends, but there is still some terrain or distance between them, in terms of personal knowledge.  There are still places that their friendship has not touched.
Pon Farr has recurred frequently in Trek history, both official and unofficial.  It appears briefly in the third feature, Star Trek III: The Search for Spock (1984), and is a key element of such Star Trek: Voyager (1995-2001) episodes as “Blood Fever.” It also is a prominent plot element in Enterprise’s (2001-2005) “Bounty.”  Fan fiction, of course, has really run wild with the idea.
In terms of Vulcan culture, “Amok Time” provides some fascinating details. We learn that young Vulcans are betrothed to one another via telepathy, hence their mates are selected for them before they enter puberty. 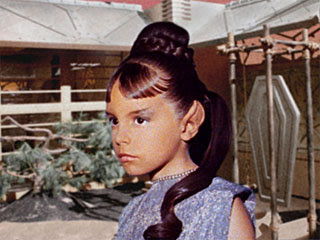 Similarly, we learn that Vulcan women often carry tremendous power and authority. Here, T’Pau is revered by Kirk as “all of Vulcan in one package.”
And T’Pring, though apparently destined to be the “property” of her mate, nonetheless demonstrates cunning and agency in a most effective way during “Amok Time’s” final sequence. T’Pring’s description of her plan, to Spock, is relentlessly logical…if cold. 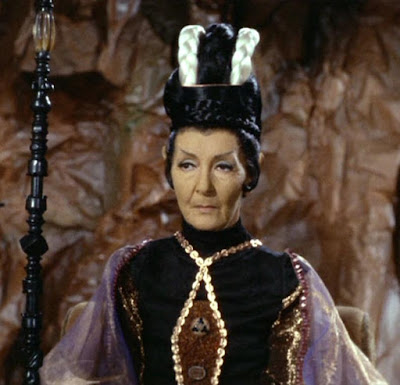 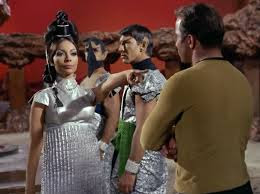 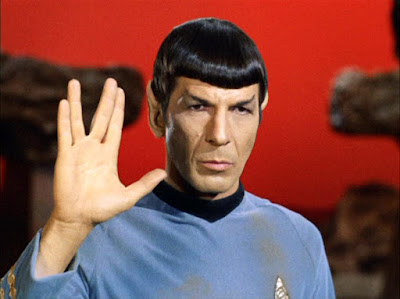 Some great Star Trek wisdom arrives in this episode too, straight from Spock.  "Sometimes having is not so pleasing a thing as wanting. It is not logical, but it is often true."
I noted that the episode is erotic, and to back up that claim, one need not only consider Mr. Spock’s physical condition -- desperate to mate -- but also brief scene in which the half-Vulcan begins to approach Christine Chapel (Majel Barrett) in his quarters.
When Spock realizes there may be no way to reach Vulcan and achieve, he begins to talk to Chapel, rather cryptically, about their natures.  He discusses a dream he had about her.  In short, it’s clear he is planning for her to “step in” for T’Pring, should he be unable to return home. Right as he is about to make his move, he gets news that they are bound for Vulcan. 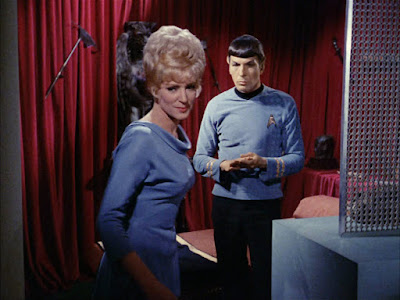 In some of Star Trek’s best episodes, there’s just so much to talk about, and it’s hard to remember each  and very detail.  Here, I must make note of the wonderful manner in which McCoy is depicted in this episode. Spock asks for him to be a “best man,” in essence, at his wedding. A lesser writer would have had McCoy crack wise, or quip at the request.
Instead, McCoy answers honestly, and with heart-felt emotion. He would be honored to fulfill that role.
And, of course, it is McCoy who -- with T’Pau’s apparent tacit approval -- saves Kirk’s life with his “tri-ox” compound. That’s some real quick thinking McCoy does under that Vulcan heat, and it saves the day.
Once more, Kirk is lucky that his command crew thinks so inventively, and so rapidly, in such unconventional situations.
I pretty much write a review of Star Trek episodes every week, and I don’t know, this week, that I’ve done “Amok Time” justice.
I have tallied the concepts it adds to Trek lore -- Pon Farr, the Vulcan salute, “Live Long and Prosper” – but I don’t know that I’ve signaled just how entertaining, or how emotionally-fulfilling the episode is.
The Kirk-Spock friendship is, often times, what makes Star Trek so memorable, so effective, and finally, immortal.  Here, in “Amok Time,” that friendship is front and center in a most dramatic and memorable way.
I could literally watch "Amok Time" once a week and not get bored by it.
at September 06, 2022