Breakaway Week: "Another Time, Another Place" 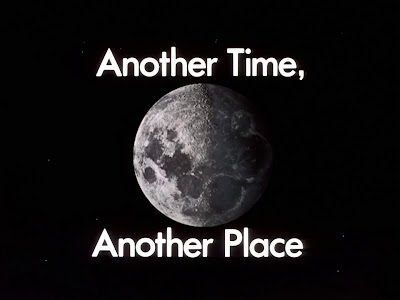 “This is the Earth.  But not the world we knew…Apart from us, it’s empty now.  A civilization once flourished here…another Atlantis, perhaps.”
-Victor Bergman describes a mysterious alternate Earth in Johnny Byrne’s “Another Time, Another Place.”
The Earth’s moon, in a region of distant space, passes through a strange, inexplicable phenomenon. The moon’s velocity increases as the Alphans experience dizziness, shock and double-vision. Dr. Helena Russell (Barbara Bain) gazes out of a window in Main Mission, and sees -- for a fraction of a second -- another moon, a duplicate, moving off into space.
Moonbase Alpha attempts to recover from this freak incident, but can’t. One Alphan technician, Regina Kesslan (Judy Geeson) begins acting strangely.  She exhibits signs of sun-burn, and seems to be living a past or future life in the present, one in which her husband, Alan Carter (Nick Tate) and Commander Koenig (Martin Landau) have died in an Eagle crash.
And then the news arrives that the moon has traveled into a new solar system, and is approaching…Earth.
In fact, the moon will soon slip into the very orbit it left on September 13, 1999.  Hoping to learn if it is possible to settle on this strange Earth -- which seems almost devoid of all life -- Koenig, Russell and Carter encounters a group of Alphan colonists and realize that, in some strange way, the Moon has caught up with itself…or another version of itself…
But time is running out, for now there are two moons in the night sky… 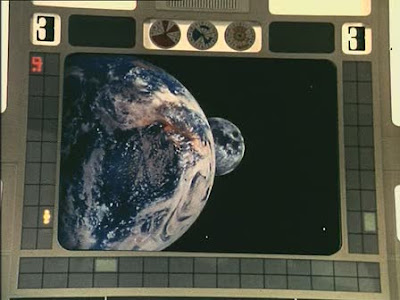 For many humans, there is no more vexing problem to ponder, perhaps, than the one that goes: “What if I had just chosen to take the other path…”
In ways poignant and profound, “Another Time, Another Place” explores this notion of paths untaken. The episode introduces the Alphans to a life that is simultaneously theirs and not theirs, one in which love has been acknowledged, and new destinies forged.  But it is also a world of death and despair, being both bleak and lonely.
Specifically, the Alphans encounter a version of themselves five years into the future... one that has settled on an inhospitable Earth.  Commander Koenig and Alan are dead, and Helena Russell is still in mourning over John’s passing.  In fact, part of the reason this episode remain haunting to this day involves Barbara Bain and her performance as the other Russell.  So often in cult-tv history we get “mirror” or opposite versions of characters, but Bain presents in “Another Time, Another Place” an older, sadder version of the character we all know. One who has found love with Commander Koenig, and then lost it…just as she lost her first husband, Lee. Now, she toils to keep the community alive, as John would no doubt want, but she’s lost, alone, and unhappy.
I had the great fortune to discuss the origin of the moody “Another Time, Another Place” with Space:1999 author and story editor Johnny Byrne (1935 – 2008) when I conducted a wide-ranging interview with him several years ago. “The idea of a doppelganger is something that is prevalent in my culture,” he informed me at the time.
“Growing up in Ireland, I didn’t have radio or television, so everything was imagination and history, and super[natural] history if you will. It wasn’t that we weren’t smart or educated -- I knew by heart everything Shakespeare had written by the age of 11. But to all of us, there was the real world and the other world.”
And the Alphans in “Another Time, Another Place” interface with a version of Ireland’s “other world,” but one relocated to the distant regions of outer space.
“Well, the Irish believe there’s a very thin dividing line between fantasy and reality. In all Irish mythology there is an engagement with the other world, and people who come from that environment should have no trouble comprehending the kind of story I was writing for Space: 1999. It was the idea of leaving yourself, of discovering an alternative version of yourself.”
Specifically, Byrne based the space phenomenon which “doubled” the Alphans (and created doppelgangers) on an element of his everyday life.
“One hundred yards up the road from the house where I grew up was this little church with a fantastic reputation. We heard that if you walked around the church sun-wise [clockwise] three times, you’d meet yourself coming out. That kind of legend was the core of “Another Time, Another Place." Our mythology is filled with situations in which a person stumbles into a mist and then emerges three hundred years later, or some such thing.  So I constructed a story around the experience of my upbringing.”
“Another Time, Another Place” goes further than that description suggests, however.  Commander Koenig must reckon with his corpse, with the possibility of a future in which he both marries Helena Russell, and then, because of an accident, loses her. The idea of coming face to face with yourself is one (terrifying…) thing, but the notion of going into the future and countenancing your corpse is of an entirely more bracing degree.
In fact, the specter of ever-present death hangs over this episode in a profound and disturbing fashion.  When Regina Kesslan is unable to reconcile the two universes that she inhabits, for instance the episode features a grim-reaper type-visage: a skull in a cloak.
By the same token, Koenig and Carter visit a “dead” version of Moonbase Alpha, one gutted and salvaged for parts by the desperate Alphan colonists.
Even the Earth we see here seems haunted by the angel of death.  Man may have existed here, or never have existed at all.  But the trees appear to be dead and devoid of leaves, the soil is rust-brown, and night always seems to be falling.

It’s as if by splitting into two parts, the Alphans have entered a kind of twilight real, a place of half-life.  Thus the final, symbolic image of the episode -- Helena Russell clutching a groups flowers from the alternate Earth -- suggests two things simultaneously. The first is a kind of spring or re-birth: the flowers continue to live because the Alphans -- and the universe itself -- are made whole once more.
Or, contrarily, the survival and thriving of these flowers could suggest visually that in some unknown way, the other Alphan community and its world also survived intact, though forever closed off from our consensus reality.  This notion harks back to Victor’s comment in the episode that there is an order to the universe, and ultimately the Alphans belong where they belong. The universe skips a track in this episode, and then restores itself, to state the matter bluntly. 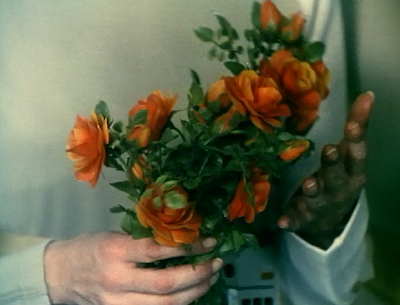 I’ve always considered “Another Time, Another Place” a crucial piece in the Space:1999 Year One story arc, which Johnny Byrne confirmed was on his mind, even if, at times, he wasn’t always conscious of how it was working: “There was something deeply subconscious working all the time and none of us were aware of it,” he told me.  “And it only happened to those of us who were there all the time, because the writing of the individual scripts was only a step in the whole process.  We were in the planning of the episodes, we were seeing the dailies day-by-day, we were working ahead and looking at new stories.  We were at starship control, we were looking for those unidentified little blips – which were the scripts keying into something special.”
In terms of the story arc, we know that in series lore, the Alphans bring life to the planet of Arkadia in the final episode of the season (“Testament of Arkadia”), just as the Arkadians once brought life to Earth, and are therefore responsible for the dawn of man there.
What if the planet Earth encountered in “Another Time, Another Place” is one in which this kind of symbiosis never existed? In which the Arkadians did not come to seed our world, and so life didn’t develop?
That’s just one possibility.  Another is that this is our Earth, only far into the future, when the memory of mankind is just that, a memory…like how we today think of Atlantis. In whatever way one chooses to interpret the multi-faceted ambiguities of this episode, “Another Time, Another Place” remains one of the most haunting installments of Space: 1999.
at September 12, 2022