Stardate 4729.4
A special “honor” is bestowed upon the U.S.S. Enterprise.  The vessel will be the “prey” in a war games scenario involving four other Constitution class starships: The Lexington, the Potemkin, the Excalibur and the Hood.
During the war games exercise, the Enterprise will also play host to the brilliant Dr. Richard Daystrom (William Marshall), and his new invention: the M-5 multi-tronic computer.  The M-5 is a “thinking” machine that can perform the operations of the Enterprise’s crew.
Only Captain Kirk (William Shatner) and his command crew, along with Daystrom, will remain aboard the vessel as the new computer’s capabilities are tested.
Kirk is not happy about M-5 assuming operational command of his ship, and even less happy when Commodore Wesley (Barry Russo) refers to him as a “dunsail,” a nautical term that means “superfluous,” “useless or “unnecessary” part of a vessel.
Once underway, the M-5 malfunctions, destroying a freighter, the Woden, that it encounters. The M-5 also kills a technician who attempts to “pull the plug.”
Now Kirk -- with a reluctant Daystrom’s help -- must appeal to M-5’s morality before the “ultimate” computer destroys four starships and their crews… 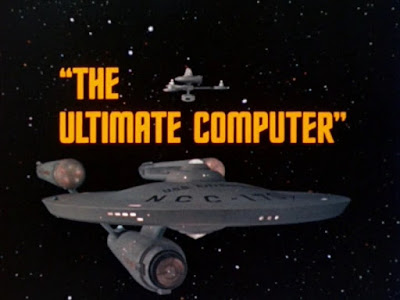 It’s always amazing to consider how far Star Trek (1966-1969) was ahead of its time. Although the sets and costumes may seem aged by today’s standards, the ideas and themes of most episodes remain as relevant, timely, and significant as ever.  Case in point: “The Ultimate Computer.”
This story involves a machine, the M-5 that renders man himself “obsolete.” In a future Starfleet of M-5s, humanoid crews -- and captains too -- are superfluous.  In the story, Kirk faces the very real possibility that Starfleet, in five years, will have no use for his abilities and training.  He faces the possibility of losing his job, in other words, to a machine. 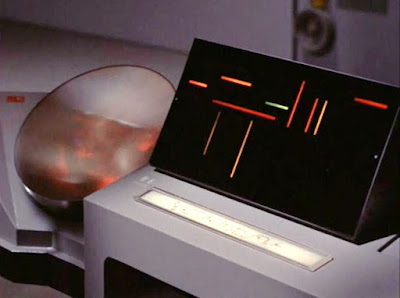 This is not some remote possibility, for many of us, living here on Earth in 2017. Indeed, in the June 25th, 2016 edition of The Economist, there was a special report published titled “Automation and Anxiety” which examined the impact of artificial intelligence on jobs, and asked the question: will smarter machines cause mass unemployment?”
So, some 49 years and an odd number of months after Star Trek’s “The Ultimate Computer” aired, the very themes it obsessed upon were part of our reality here in the 21st century.  There has been much talk of governments in Western countries providing citizenry a “basic income,” not because people are entitled or lazy, but because machines are developing at such an incredible rate, and will soon render obsolete many jobs, careers, and whole fields of work.
I have written here before how it is sometimes bothersome to me the way that Star Trek suspiciously views “progress” (think of how the androids are handled in “What Are Little Girls Made Of,” or how the rehab colony is handled in “Dagger of the Mind.”)  In this case, however, it is important to note that Star Trek is very tempered and even-handed (not to mention accurate…) in its exploration of this problem.
Kirk faces the possibility of losing his job to a machine, even as the machine is proven to be undependable, and he can breathe a sight of relief.  But leave it to Mr. Spock to note, in the episode, that though computers make excellent tools, he has no desire to serve under one.  This is a valid statement, and one that I think people of all beliefs can get behind. 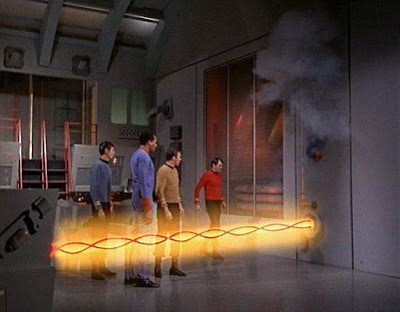 As Spock might remind us, better machines are always going to be developed, and utilized. But humanoids must always be the ones managing and overseeing these tools, lest disaster result.
Today, we live in a world of drone warfare, and robot expeditions to other worlds.  But in both cases, the operators are human. There is still, therefore some connection to our laws and moralities.  The machine do not operate alone, without oversight, as M-5 would eventually operate.
Dr. Daystrom’s way of overcoming this drawback is by impressing human “engrams” on the machine. In other words, M-5 is programmed with his sense of morality; with his very world view and belief system.  Daystrom believes this will make the machine more human, more capable of making compassionate decisions. And ironically, this detail is the only thing that permits Kirk to “talk” this computer to death. It holds the same “human” beliefs as its creator.
What we see, intriguingly, is that M-5 suffers from the neuroses of his master. Therefore, a machine can’t make the “jump” to being human, without terminal malfunction.  Star Trek returns to this idea, of machines needing humans, to be “whole,” in Star Trek: The Motion Picture (1979).
William Marshall proves a powerful presence as Daystrom, a tragic figure. As the episode makes plain, Daystrom achieved his (amazing) success with Duotronics at a young age, and has spent the rest of his adult life as a has-been. Therefore, M-5 is his “comeback” in the scientific community, and his whole sense of ego, his whole identity, rests on the computer’s success.  It is no wonder that he starts to go mad, as his creation does. He’s under a lot of pressure. 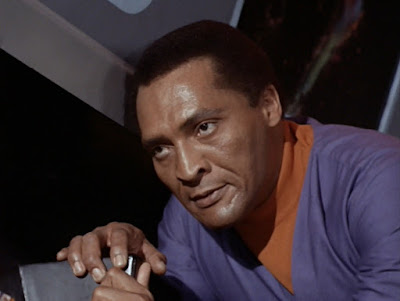 And yet, Daystrom is not a typical mad doctor or “egghead” character. He is a man of morals, a man who wants nothing more than to prove to the world that he still has something to offer it.  These characteristics make him a three-dimensional person; and someone that we can feel great pity for.  His name is honored in the Star Trek franchise, and particularly in The Next Generation (1987-1994) wherein many episodes make note of “The Daystrom Institute” (“The Measure of a Man,” “Data’s Day.”)
As far as the episode’s climax goes, “The Ultimate Computer” has both virtues and drawbacks.  The virtues involve seeing the Enterprise pitted against four other starships in a war game scenario that proves frighteningly real.
The drawback is that the main crisis arrives, and we are left to watch Kirk talk-to-death yet another super-computer.  This “talking to death” of a computer also occurred in “Return of the Archons” (a superior episode) and in the second season tale “The Changeling,” in regards to Nomad.
The problem with this solution is that Kirk has to be so persuasive in his arguments that a computer agrees, basically, to commit suicide, based on his discourse.  While Kirk is indeed one hell of a public speaker and persuader, it isn’t always believable, at least to this viewer, that computers would destroy themselves based on human rhetoric. 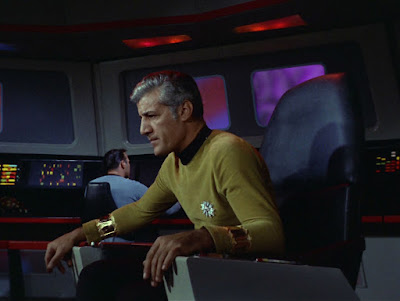 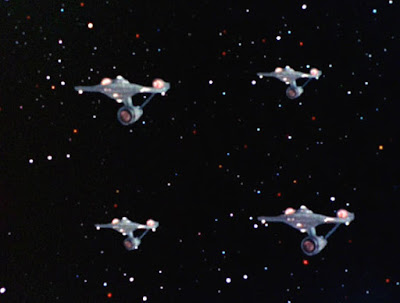 Still, I’ve always felt that “The Ultimate Computer” is a powerful episode of Star Trek because it grapples meaningfully with automation, and the impact of advancing technology on people, and their livelihoods.
Furthermore, I’ve always loved seeing Russo’s Wesley in the command chair of his Constitution Class starship, ready to destroy the Enterprise, and M-5, to prevent any other loss of life. Marshall’s performance as Daystrom only adds to the episode’s virtues, and, finally, Kirk’s worry about becoming obsolete is one that many of us absolutely can identify with.
at September 08, 2022