Stardate: 4307.1
On trajectory for Starbase 6 -- and shore leave -- the Enterprise and her exhausted crew are unexpectedly diverted by Starfleet to Sector 39J, where something terrible has happened to system Gamma 7A.
That inhabited system contained two billion life forms.  All are now dead.
Meanwhile, Mr. Spock (Leonard Nimoy) psychically experiences the death of the starship Intrepid, a vessel manned entirely by Vulcans.
Upon investigation, the Enterprise encounters a zone of darkness in space. As the starship probes the void, the crew finds something at its heart: a “giant, single celled animal” made of protoplasm.  This amoeba-like creature, according to Spock, is more than 11,000 miles long, and is “invading our galaxy like a virus.”
Unfortunately, further study of the amoeba suggests that the organism mimics all functions of terrestrial life, meaning that it eats, breathes, and can reproduce.  It seems to eat energy, and life force too, and could be preparing to spawn more of its own, dangerous kind.  It is destructive, Spock concludes, to all known forms of life.
Kirk must make a difficult decision when he decides to send a shuttle to deposit an anti-matter magnetic bottle in the colossal space amoeba, which McCoy (De Forest Kelley) describes as “the greatest living laboratory” in the galaxy.
Since it is a suicide mission, which of his friends -- Spock, or Bones -- should Kirk condemn to death? 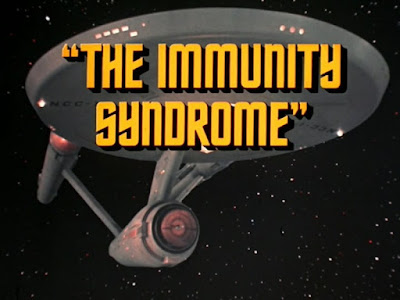 “The Immunity Syndrome” is another “galaxy destroyer” episode of Star Trek’s (1966-1969) second season.  In stories of this formula, a force with destructive capacity beyond human understanding threatens to destroy whole swaths of the galaxy, until the Enterprise saves the day.
Already in Season Two, the Enterprise has vanquished destroyers such as Nomad (“The Changeling,”), the Planet Killer (“The Doomsday Machine”) and the Vampire Cloud (“Obsession.”)  This week, the 11,000 mile long space amoeba gets the same treatment. 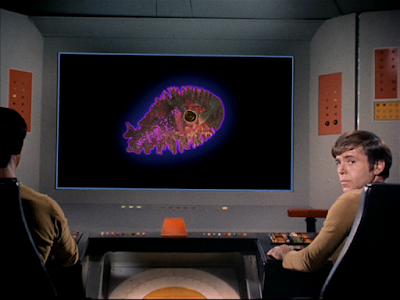 “The Doomsday Machine” is the greatest episode of this particular narrative type, filled with dramatic character interaction, and heaps of tension and suspense.  It’s the best of the formula, and, actually, one of the very best episodes of Star Trek ever produced (which is saying something). 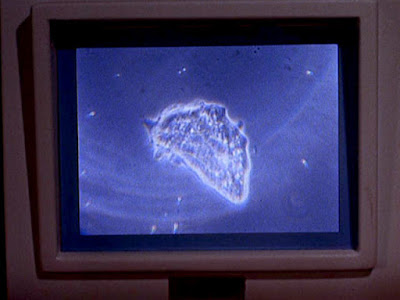 Episodes of this type tend to be painted on a large -- perhaps too large -- canvas.  Here for instance, two billion life-forms die, and yet by the end of the hour, Kirk is making eyes at a good looking yeoman and commenting about taking shore leave on a “lovely planet.”
I’ll be brutally honest: killing 400 Vulcans on the Intrepid is “quite sufficient.”  There's no need to raise the stakes so high...to the billions.
Especially since billions were just eradicated in “The Changeling.”
Just how many ravaging, super-galactic monsters are roaming the Alpha Quadrant in 2268, anyway?
And would the space faring civilians of a society like the Federation feel safe traveling anywhere with such holocausts occurring simultaneously, in manned space?
In the Federation history books, this year must be remembered as particularly catastrophic. 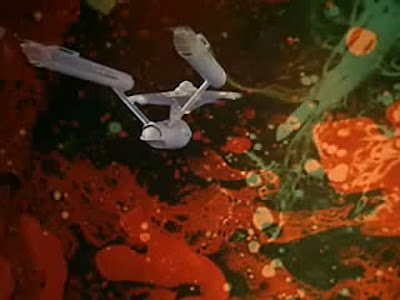 Still, it’s clear, at least, that Star Trek: The Motion Picture (1979) -- a film I love and admire -- takes some elements from this tale, namely the Enterprise’s (dangerous) journey into the interior of an alien life form.
Also, much like the first Star Trek movie, most of the action in this episode takes place on the bridge of the Enterprise.  It doesn't possess much visual distinction, though I love the original effects of the Enterprise approaching the amoeba.
One more similarity: Both "The Immunity Syndrome" and the first feature film also resolve when Spock is involved in a probe -- whether aboard a shuttle, or in a thruster suit -- deeper into the giant, enemy entity.
After a season including the similar tales “The Doomsday Machine” and “The Changeling,” “The Immunity Syndrome” doesn’t feel, perhaps, like a good choice regarding its particular narrative. It’s too familiar, and too predictable, and ramping up the death count -- 2 billion! -- doesn’t make the story any more suspenseful or exciting.
In fact, the episode has, at points, an unpleasant aura.  Since the giant space amoeba is draining the life of the crew, everyone is exhausted, suffering, and at their worst. This quality isn’t especially appealing to watch for fifty minutes. 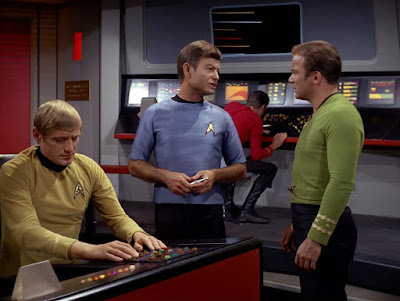 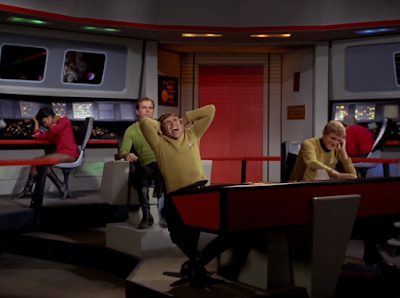 However, taking the opposite tack, I do appreciate that “The Immunity Syndrome” finally comes down to something very dramatic, and something that truly matters: the agonizing choices a starship commander must make.
Kirk has an unenviable task in this episode. He must choose which of his officers should die.  It’s not just that both Spock and McCoy are his friends, and he would hate to lose either. It’s that he must choose and decide who can best accomplish the mission.
Kirk does make the choice, without shirking or delaying it, and it’s the right one. But I wouldn’t want to stand in his shoes. If he chooses right, and the ship is saved, there is still every likelihood he loses; sacrificing a friend and vital crew-member.  Fortunately, Spock survives.
Kirk’s choice, and the competition between Spock and Bones to lead the dangerous mission are the best elements of “The Immunity Syndrome.”  When Spock is chosen, and Bones needles him, Spock asks to grant him (Vulcan) dignity in the situation. McCoy, however, is upset not to have been chosen and says he can’t grant what he doesn’t understand.
It’s a powerful character moment for both Spock and McCoy.
This episode also offers a splendid comparison between Spock and Bones.
Spock seems to want to go on the suicide mission because he knows he can best endure the journey. It is a logical choice for him to go, as the ship will be saved, and the research will be completed.
By contrast, Bones wants to go, it seems, because he is excited by the possibility of discovering something new, of increasing the Federation's bank of knowledge or research.
"The Immunity Syndrome" provides an interesting window on how each of these fine officers thinks, and how each views their role.
So, “The Immunity Syndrome” possesses merit. It asks us to weigh a commander’s difficult choice, and then it shows the impact of that choice on the men most responsible for carrying out the commander’s orders.
I also find the starship Intrepid, and its fate, to be a fascinating aspect of both Star Trek in-universe history, and Star Trek’s influence on later popular science fiction ventures.
On the former front, we learn that Starfleet has manned an entire starship -- 400 + individuals -- with Vulcans.  I wonder why this is the case, and why Starfleet made the decision to man the ship in this fashion. It might have been interesting to learn that other starships are primarily Andorian, or Tellarite majority.
On the latter front, there is a scene early in “The Immunity Syndrome” when Spock, at his console, reacts with pain and dismay, to the faraway destruction of the starship Intrepid. He feels, psychically, the loss of life.
In Star Wars (1977), Ben Kenobi experiences a very similar moment on the Millennium Falcon, when he feels Alderaan die, in near identical fashion. 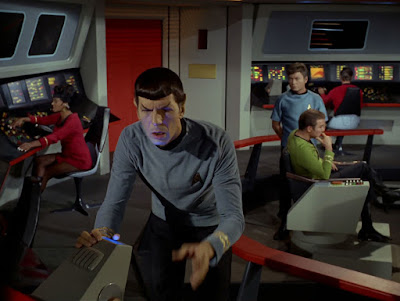 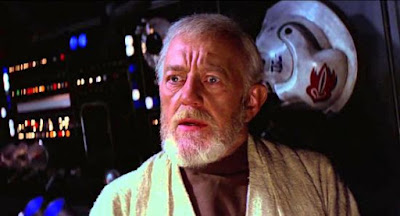 We know from George Lucas himself that he watched Star Trek reruns while writing Star Wars (hence technology commonalities such as tractor beams and cloaking devices in both universes), and one has to wonder if “The Immunity Syndrome” was rerun at one point during his creative process.
So the question is: do Vulcans tap into the Force?
at September 08, 2022