Stardate 2124.5
While the Enterprise traverses a void or “star desert” en route to the colony on Beta 6, it unexpectedly encounters a rogue planet; one incapable of supporting human life for any significant duration.
Then, Captain Kirk (William Shatner) and Mr. Sulu (George Takei) are abducted from the bridge by an unseen force.
A landing party to the planet led by Lt. De Salle (Michael Barrier) discovers that Kirk and Sulu are now on display in the home of the retired General Trelane (William Campbell), a flamboyant man who seems obsessed with Earth cultures of the late 1700s and early 1800s.
Released from stasis, Kirk demands that his men be set free at once, but Trelane refuses. Spock (Leonard Nimoy) manages to beam the crew up anyway, but Trelane again uses seemingly-miraculous powers to return his “guests” to his home on the planet.
Kirk theorizes that Trelane’s powers are aided by advanced technology, and destroys a mirror that houses his power device.  This action earns Kirk Trelane’s wrath, and the strange alien condemns Kirk to death by hanging…
...Fortunately, Trelane's parents intervene, and make the naughty boy come home for the night. 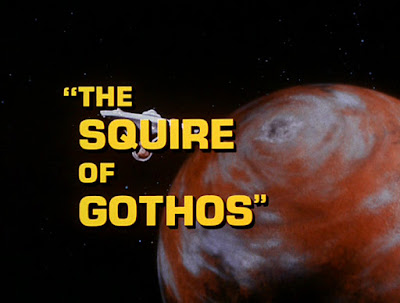 Remarkably, “The Squire of Gothos” is yet another classic episode of Star Trek; one that is so commonly-known (and oft-imitated) that it seems to have permanently entered the pop culture firmament.
For example, Futurama paid homage to “The Squire of Gothos” in one episode ("Where No Fan Has Gone Before,") and the 1970s Filmation live-action series Space Academy (1977) featured a similar story of misbehaving alien youths in the narrative called “Space Hookey.” 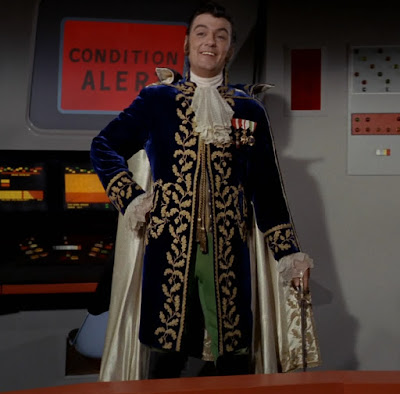 Basically, in “The Squire of Gothos,” the Enterprise crew is menaced by a dynamic, selfish individual who proves, in the final act, to be nothing more than a spoiled-rotten alien child. This story resolution is another way for Star Trek to explore its oft-held viewpoint that what appears evil at first blush is often quite understandable, once all the facts are actually known.
Harking back to "The Corbomite Maneuver," what is fearsome or terrifying is only to be considered such until more information is gathered.
Trelane, believed to be a grave threat, is actually just an indulged alien kid.
By the same token, “The Squire of Gothos” -- much like Paul Schneider’s other first season episode, “Balance of Terror” -- is strongly anti-war in both conception and execution. 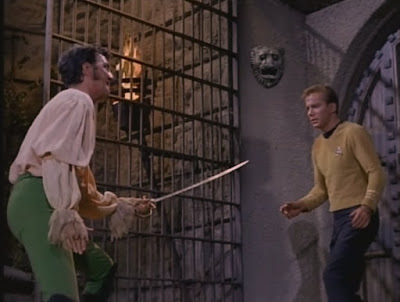 The character of Trelane, for example, is a child who pretends to be a great soldier (and great general), and who plays dress-up too.
Trelane has plainly never experienced war personally, since he views it as some glorious, positive experience. He doesn’t understand the the costs of war. For him, war is colorful banners, braggadocio, and dreams of conquest.
When Kirk shows him that he could get hurt, or that his toys (like his sword) might get broken in real combat, Trelane pouts and complains.
Trelane could have been fond of great political leaders, scientists, or artists, but the fact that he worships soldiers proves the anti-war bent of the program's writers. Too many sons and brothers, no doubt, grow up playing dress-up and pretending to shoot guns, or swing swords. 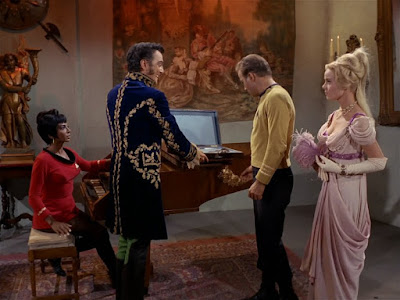 Yet by the same token, one might conclude that Trelane is indeed a perfect stand-in for some notable politicians in our own culture who never served in any war and yet like to talk tough, or even don flight suits so as to appear like they are victorious heroes.
I tend to “object” to such politicians, and view them as mere boys with toys.  And I love how this episode of Star Trek allows Spock to object to Trelane in such a cutting way..
Spock states: “I object to you. I object to intellect without discipline. I object to power without constructive purpose.”
This is a great description of Trelane, and a great put-down to those who see war only as an opportunity for personal glory or power, and not as a thing to be avoided because it is ugly and destructive. 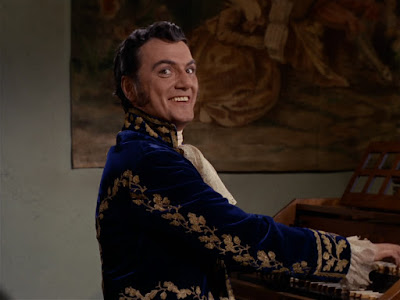 “The Squire of Gothos” works so effectively not merely because of the brilliant writing and anti-war stance, but because William Campbell is so utterly dynamic -- and unforgettable -- in the role of Trelane.
He makes Trelane a preening child indeed, one who is all “Id.” Although one might conclude that he is charming, Trelane is also one of the most dangerous foes Kirk has ever encountered because he boasts so much power, and so little constructive purpose.
He’s a spoiled brat who thinks it is okay to torture his pets, essentially.  He never stops, even for a second, to conclude that his pets might resent being hurt. Or that his pets have feelings in the first place.
Many fans of Star Trek see Trelane as the antecedent to The Next Generation’s Q, yet there is an important difference.
As obnoxious and dangerous as Q (John De Lancie) is, he generally boasts some (hidden) reason for interfering in the affairs of man. He sounds the warning bell to the Federation about the Borg, for instance, in “Q-Who.”  At least in this appearance, Trelane possesses no such overriding purpose. He is selfish and capricious instead.
It's all about him, and his fun.
So just imagine the most irresponsible and emotionally-immature bully in the world with the power of life and death over millions.  Now imagine he's holding you captive.
That’s what Trelane represents in “The Squire of Gothos,” but it’s more than that too.
All of his musings are martial in nature. For him, life and death, war and peace, are but games that he can control. He’s an alien child, but on human terms he’s just another sociopath.
“The Squire of Gothos” is a nearly perfect episode of Star Trek, but it does have one memorable flaw. A key aspect of the episode is Trelane’s fallible nature.
Although extremely powerful, he makes mistakes. One such mistake is that Trelane has been gazing back on Earth from 900 light years distance.
According to the episode, he is looking at Earth, then, some nine hundred years ago. What does he see? The age of Napoleon and Alexander Hamilton.
These historical allusions would put the Earth time at roughly 1800 AD.  But if that is 900 years ago, Star Trek time, then Kirk’s adventures are occurring in approximately the year 2700 AD!
At this late date in the series -- roughly seventeen to nineteen episodes in -- it is shocking that Star Trek has still not settled on a firm chronology or continuity for its “future” world. Similarly, terminology (Space Command vs. Starfleet Command) is still in flux in this episode.
Today, we know of course that Kirk’s adventures occur in the 23rd century, and that date is widely accepted.
What’s not widely remembered is that it took Star Trek more than half of its inaugural season to start building a concrete line of historical continuity.
Besides that nit-pick, "The Squire of Gothos" is a brilliant and extremely entertaining addition to the Trek canon.
at September 06, 2022