Star Trek Week: "The Devil in the Dark"

Stardate 3196.1
The U.S.S. Enterprise arrives at the Pergium Mining Colony on Janus VI. There, Chief Engineer Vanderberg (Ken Lynch) reports that fifty of his miners have been killed -- burned to death -- by some kind of “monster” in the subterranean tunnels.
Because many worlds depend on Pergium from the planet, Captain Kirk (William Shatner) must put an end to the killings immediately, and restore the normal mining process.  Unfortunately, the monster makes that mission difficult by damaging the atmospheric processor and stealing a key piece of equipment.
With only 48 hours remaining before the reactor will go super-critical, Kirk teams with Spock (Leonard Nimoy) to hunt the monster.
Down in the mines, the duo discovers that the creature -- a horta -- is a silicon-based life-form, and that she is retaliating against the human miners because they have (unknowingly) been destroying her eggs.  She is the mother to an entire race of hortas, and Spock attempts a mind-fusion with her to forge a peace.

Except for one notable exception (“The Alternative Factor”) the back-half of Star Trek’s first season moves quite remarkably and assuredly from strength to strength, from legitimately great episode to legitimately great episode.  In short, “The Devil in the Dark” is another absolutely pitch-perfect episode, filled with humor, pathos, and great character touches.
One can gaze at an earlier show, “The Man Trap,” and catalog the ways that “The Devil in the Dark” is a major improvement, philosophically speaking.  There, Kirk, Spock and Bones end up hunting an intelligent creature that is the last of its breed.
Here, by contrast, they live up to their stated ideals, make peace with a “monster” and forge a peace between the aliens and humanity.
In “The Man Trap,” all these officers could do was express regret that they killed the salt vampire.
Here, the Horta and humanity become friends, and actually work side-by-side, by episode’s conclusion.
In other words, the Starfleet characters don't just talk the talk in "The Devil in the Dark," they walk the walk too. 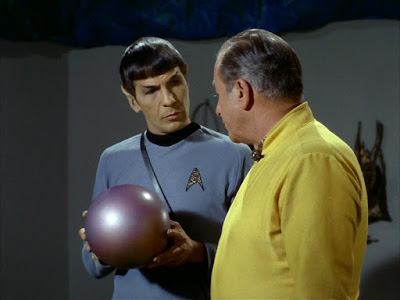 A number of prominent writers have described “The Devil in the Dark” as being a remarkable episode because the monster turns out to be sympathetic. Because the monster has a recognizable 'human' motive: she is a mother protecting her young.
But let's put hat myth down once and for all.  This isn’t an original touch at all, nor the reason that "The Devil in the Dark" is so beautiful, so important a tale.  One can see that sympathetic monsters dot film history (King Kong, anyone?), and that  “mommy” monsters protecting their young are not that uncommon, either (see 1961’s Gorgo, for one example). 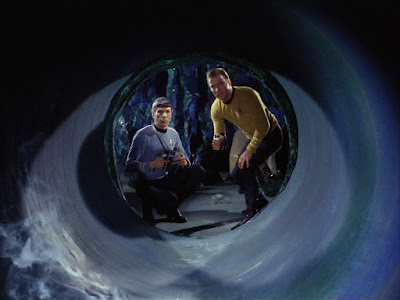 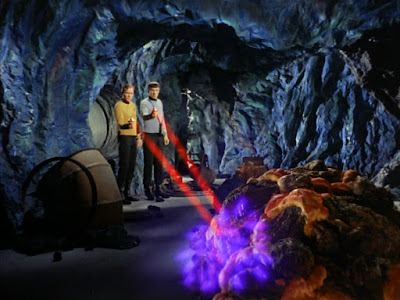 Instead, “The Devil in the Dark” is so remarkable because the “monster” and humanity choose to work together, even after blood has been spilled on both sides.
Fifty human miners are dead.
Thousands of Horta eggs have been destroyed.
And yet neither side -- human nor alien -- decides to pursue the easiest path; the path of revenge, or bloodshed.  This expression of peace and forgiveness -- coming in the midst of the Vietnam War -- is actually a huge statement about man’s ability to overcome his violent nature.
Although the series often voices a distaste for diplomacy and diplomats, there can be no mistake about what occurs here. Kirk and Spock engage the Horta in diplomacy, and are impartial arbiters in a struggle. They don’t take the side of the miners simply because they, also, happen to be carbon based life-forms. 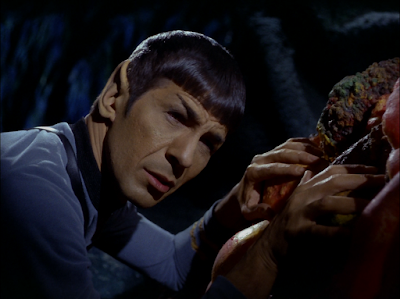 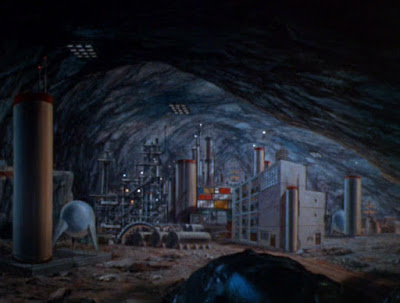 The idea of mother monster protecting her eggs isn’t new, but it certainly does make the story one that we can relate to on simple human terms.  We know, instinctively, the loss the Mother Horta has faced.  We understand her anger and rage.  Yet what seems more original, at least to me, is the nature of the Horta.
Silicon life-forms were rare in TV history before Star Trek, but later appeared on Space: 1999 “All that Glisters,” Star Trek: The Next Generation (“Home Soil”) and even The X-Files “(Firewalker.”) The unique nature of the alien here makes it one of the most memorable in all of television history.
In terms of characterization, there’s a scene in “The Devil in the Dark” that speaks volumes about Kirk and Spock’s respective natures…and their mutual friendship.   Spock has suggested that the Horta be saved, for study, for the sake of science itself. Kirk insists it must die for it murderous actions.
They are at odds.
Yet when Kirk encounters the Horta, he doesn’t kill it when given a clear opportunity.  He is guarded, of course, but sees the Horta's wounds and realizes it may not pose the threat he feared.
He takes a chance, in other words, on peace and understanding.
This is not only a brave and heroic choice considering the personal danger, but one that suggests Kirk is a great leader, and a fair minded person.
He will often plunge in, “where angels fear to tread,” to quote The Undiscovered Country (1991), but then, when he is calmer -- and has time to size up a situation, -- he proves judicious. The reboots have captured this quality, delightfully.
In Into Darkness (2013), Kirk goes in, guns blazing, to kill Khan, over Spock’s legal and moral objections.  But when the time comes, Kirk decides to attempt to arrest Khan instead...and let the egal system work.
Kirk -- in any universe -- may not always arrive at the best, or correct answer instantly, but he finds his way to it.  That’s what makes him a great captain. He is, in essence, fair minded. He can see beyond his own perspective. 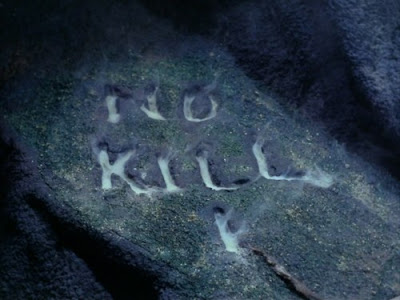 And look at Spock in this episode: He argues to save the Horta, persuasively, and then -- upon learning that Kirk is in danger -- insists that the captain kill it.
It’s not that he has reasoned his way to the wrong answer, it’s that Spock places a great value on his friendship with Kirk, and on Kirk’s survival. Logically, the Horta should be saved, but not at the cost of Kirk’s life.
So Kirk takes a chance that Spock may be right, and Spock puts aside his perspective, his viewpoint, for the (emotional...) sake of friendship.  It’s a beautiful, mirror dynamic, and it is explored so well in this episode.
These men see the world very differently, and yet they are friends, and able to see the other's perspective. 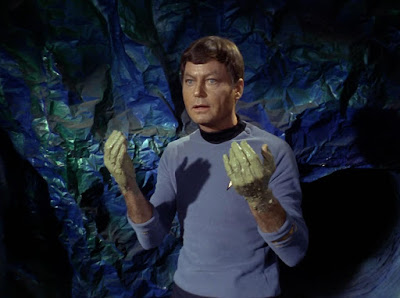 I also love McCoy’s role in this episode. He is ordered to heal a patient -- a silicon life form -- and by gosh, he does!  The look of delight on his face when he bandages up the Horta is amazing, and infectious.
McCoy is a physician by character; by temperament.  He may grumble and complain a lot, but if there is someone -- even a Horta -- who is sick, he is there for them, ingeniously developing a treatment.
The Horta is visualized with a costume created by Janos Prohaska. A variation of the same costume appeared on TV previously, in The Outer Limits episode “The Probe.”  I know some people call the Horta a “pizza monster,” but I still find it convincing, in part because we can see a piece of it “breathing” in Spock’s hands, and in part because we see its infected wound after a phaser beam has injured it.  I think the suit is pretty good, especially considering that, in the end, the monster is supposed to be different, but not fearsome.
Basically, "The Devil in the Dark" fires on all thrusters.  It stands on a strong science fiction concept (the silicon-based life form), enhances our understanding of the primary characters (in Kirk and Spock’s mutual flip-flop about killing the Horta), and reminds us that peace between unlike people is always possible, even after blood has been spilled.
By any reckoning, “The Devil in the Dark” rates as one of the ten greatest Star Trek episodes of all time.
at September 06, 2022