Stardate: 5832.3
The Enterprise intercepts the stolen star cruiser Aurora, which is headed towards the Neutral Zone, and then Romulan space.

The son of a Catullan diplomat, Tongo Rad (Victor Brandt), is one of the young troublemakers on board, and Captain Kirk (William Shatner) is ordered to treat Rad’s party as guests, despite their law-breaking.
This assignment is more difficult than it may appear at first blush because the leader of Tongo’s group is Dr. Sevrin (Skip Homeier), a scientist and genius, who has also a carrier for a new -- and deadly disease -- Synthecoccus Novae.

This is a highly unfortunate development because Sevrin’s cult is in search of the mythical natural world Eden, where it wants to start over, away from the synthetic, artificial worlds of the Federation. Among Sevrin’s followers are Adam (Charles Napier) and Irina Galliulin (Mary Linda Rapelye), both of whom will die if Sevrin is allowed to exist in that environment in his condition.
While Kirk struggles to get through to Sevrin and his followers, Spock (Leonard Nimoy) enlists Chekov (Walter Koenig) -- Irina’s old lover -- to locate Eden.
Once the planet has been located, Sevrin and his followers use ultrasonic frequencies to incapacitate the crew, and set foot on Eden.  The mission is doomed, and Kirk and his crew must save the survivors. 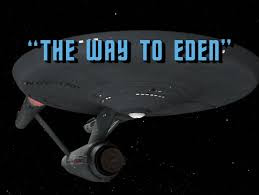 It is terribly easy to mock this episode of Star Trek (1966-1969).
Space hippies! Men in skimpy costumes! Ew!
And the space folk songs? They need auto-tune!
Some Star Trek fans can be such a loathsome, self-hating bunch at times, can’t they?

All of those complaints have much more to do with the particular audience than the flaws of this particular tale.  It's easy to mock. It's more difficult to examine, truthfully, what is being explored in this drama. 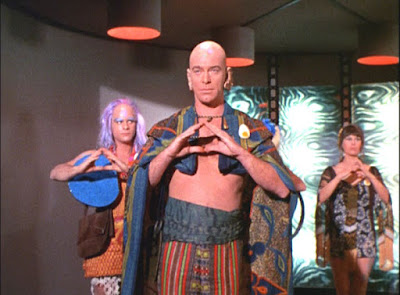 “The Way to Eden” is often counted as one of the worst episodes of the series, and yet I wouldn’t rank it that low, given what it attempts to say. Very few episodes of the original series question the Federation, or Starfleet.  The future is a place of progress, equality, and satisfaction.
But what if you long to live outside this “perfect” world?

What if you long for a simple, non-technological life? Sure, you could colonize a world like Omicron Ceti III?

But what if you don’t even want to fit into a traditional work structure at all? Or work as a farmer?

What if you just want to check out, quit working, and just be one with nature?
What if, as Spock notes in “The Way to Eden,” you are one of those “many” who is “uncomfortable with what we have created. It is almost a biological rebellion. A profound revulsion against the planned communities, the programming, the sterilized, artfully-balanced atmospheres?”

What if you are one of those who “hunger for an Eden…where spring comes?”
Those who dislike the episode find the very concept of hippies dated, but the question to ask: is this concept, as explained by Spock, dated, or actually forward-thinking?  If Spock himself can sympathize with this idea, why is it so hard for some Trek fans to identify with it? 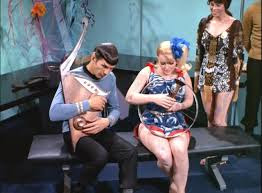 “The Way to Eden” is all the more tragic, I would argue, because a valid quest -- one that Spock supports -- is co-opted by an insane power-hungry “cult” leader. I know some people see Dr. Sevrin as the man that President Nixon once called the most dangerous individual in America,:Timothy Leary.
But in retrospect, I would say he has much more in common with Charles Manson.  Sevrin is the dark side of the hippie dream.
Why are the young and the idealistic susceptible to such leaders?

I would submit that this question is really what “The Way to Eden” is about. Youth is about rebellion, and about turning against the establishment, to one degree or another.  Sadly, some young people hitch themselves to madmen like Manson in that act of rebellion, even while possessing a desire for peace and love.  Yes, their naivete is exploited badly.
But this does not mean that their dreams or hopes are evil, or even wrong. In the 1980's the mainstream culture did a lot to discredit the hippies, but nothing discredited the counter-culture more than the likes of Manson. After his cult, the baby was thrown away with the bath water, in some sense. 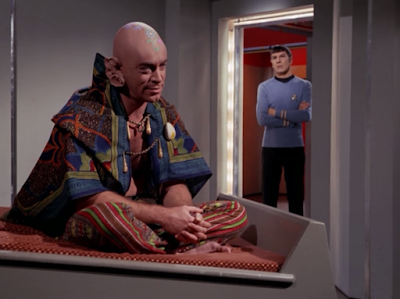 Don’t we want the young to question what we have built? So that it will be better?

It is sad that in both real life, and in Star Trek, such dreams are stolen by madmen with their own insane agendas.

What remains so remarkable is that “The Way to Eden” aired before the hippie dream ended, and thus saw clearly -- in 1969 -- the danger inherent in some of the counter-culture’s leadership. “The Way to Eden” is actually the opposite of dated. It is prophetic, predicting that the counter-culture movement would end discredited, and maligned because of men like Sevrin.
“The Way to Eden” finds a perfect way to use Spock on Star Trek, I feel. It is appropriate that the outsider to humanity -- the man constantly questioning his place in the universe --- would find something appealing in the idea of a brand new world, one free of the definitions or divisions of his own.

Spock sees validity in the “cause,” rather than standing in judgment of the youngsters, and that seems like a clever choice on the part of the episode writer. Spock is a counter-culture figure in his own way because he has substituted his own “alien” way for the establishment way. He's a pacifist, a scientist, a vegetarian, and caustic, at times, about humanity.
I also rather like how Kirk is treated in this episode. For him, everything comes down to maintaining order on the Enterprise. He doesn’t want to be a “Herbert,” and he scolds Scotty for judging the youngsters ("why do young minds have to be undisciplined ones?"). But he also can't have chaos on his ship.

At the episode’s end, Kirk tells Spock that he “reaches.” This means that he understands why Spock feels the Eden movement is worthwhile. Again, Kirk is the equivalent of a naval officer of the future, a military man, in a sense.

If even he can understand the “hippies,” then what they seek is not pie-in-the-sky, or worthless. It's human. 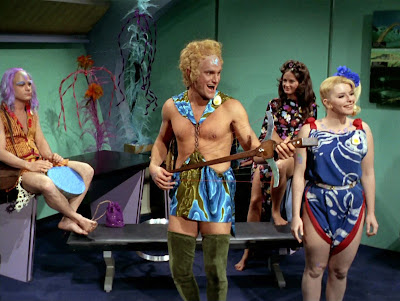 Chekov’s sub-plot in “The Way to Eden” doesn’t come across nearly as well, by comparison. He treats Irina like a scolding-parent at times, which doesn’t make him seem the young, open-minded ensign we saw in “The Apple,” or  in“Spectre of the Gun.”

If even Kirk can loosen up and admit that he “reaches,” then it seems Chekov would be a bit more receptive.
While it’s true that the symbolism in the episode is obvious -- Adam eats a poison apple in paradise -- the idea is worthy of further exploration.

Consider that it is not knowledge, in this case, that caused the innocent to eat a poisoned apple. Rather the “acid” apple that Adam ate came from his placing trust in the wrong person; the wrong leader. 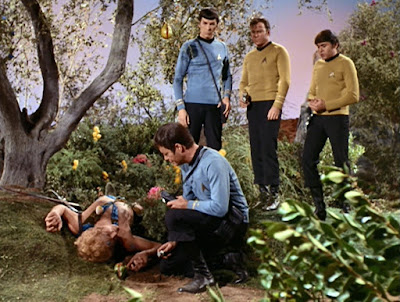 Again, consider the void in leadership in the late-1960’s and late 1970’s. In the months preceding “The Way to Eden,” America lost both MLK and RFK in separate assassinations. Those in search of a new Camelot or Eden turned to darker, less stable sources of inspiration. Just weeks after “The Way to Eden” aired, the Manson Family killed Sharon Tate.
I understand why people complain about the hippies and the songs here, but those who dismiss “The Way to Eden” so easily seem to be seeing only the hippies, and hearing only the songs.

The story - about a noble quest perverted into something insane by a mad leader -- is actually the story of what my friend Johnny Byrne called “the wake up after the hippie dream.” The summer of love gave way, finally, to a season of madness and violence, at least for some. “The Way to Eden” seems to see this possibility in a clear-eyed and prophetic way.

The mechanics are familiar: outsiders hijack the Enterprise for a quest not of the crew's design. But the ideas underlying the familiar story tell us a lot about our world as Star Trek came to an end.
at September 10, 2022