Stardate 3201.7
The U.S.S. Enterprise is ordered to proceed to the strategically-important planet, Organia as peace negotiations between the United Federation of Planets and the Klingon Empire break down.
There, Captain Kirk (William Shatner) and Mr. Spock (Leonard Nimoy) must convince the primitive people of that world, ruled by a placid ruling council, to accept the Federation’s protection.
Over and over, the Organians insist they are in no danger.
Soon, a Klingon garrison beams down to Organia and occupies the city. Governor Kor (John Colicos) orders hostages taken.
As Kirk attempts to establish a campaign of resistance against the brutal Klingon occupation, the Organians show their true colors, and intervene in the conflict.
As the Federation and the Empire soon learns, the Organians are incorporeal life-forms who long ago evolved beyond the need for physical bodies.  They find conflict distasteful, and impose peace upon the two warring governments. 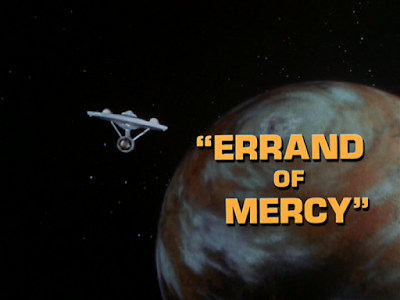 Helmed by One Step Beyond (1959-1961) host and director John Newland, “Errand of Mercy” is a historically important Star Trek (1966-1969) episode because it introduces to the Klingon Empire to the franchise.
In their original series incarnation, the Klingons are dedicated to conquest and expansion. After Star Trek III: The Search for Spock (1984) and continuing into the Next Gen era, the Klingons become concerned primarily with “honor.”
But this is not all the case to start out.
The Making of Star Trek (Ballantine Books, 1967, page 257) provides an official behind-the-scenes summary of the Klingons and their aims. “Their only rule in life is that rules are meant to be broken by shrewdness, deceit, or power. Cruelty is something admirable, honor is a despicable trait.”
Regardless of the specifics of their alien nature, the Klingons perform important thematic and allegorical purposes in Star Trek.
In universe, they serve as a check on the expansion of the sunny United Federation of Planets and its Starfleet.
Artistically-speaking, the Klingons serve as a stand-in or corollary for the Soviet Union in the 20th century Cold War. They are a force of equal strength to the West (the Federation) but possessing a vastly different ideology.
The Klingons and the Federation clash in the series, particularly in the second season, over the direction and loyalty of several sovereign less-advanced (read: Third World) planets in stories such as “Friday’s Child and “A Private Little War.”
Very clearly -- and very effectively -- Klingon and Federation interference in these cultures is designed as an explicit mirror for United States and Soviet influence/interference in Vietnam.
It is clever how “Errand of Mercy” creates a futuristic Cold War scenario too.  The advanced Organians impose a peace, outright forbidding a “hot” war between parties. Thus it is left for the two sides to use more subtle methods (like arming third parties…) to achieve their galactic agendas.
In real life, the competing powers possessed the wisdom not to fight a “hot” war because they realized it had but one possible conclusion: nuclear Armageddon and the end of the world.  Star Trek proposes, instead, an interruption of war by a race of incorporeal, highly-evolved aliens. 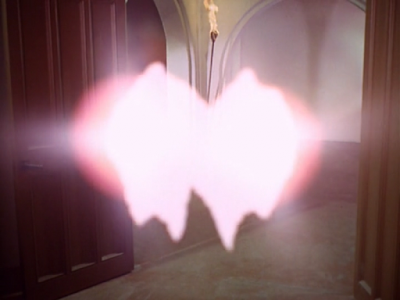 A few weeks back, I wrote about the “gunboat diplomacy” of the otherwise very good, very enjoyable episode “A Taste of Armageddon.” There, Kirk interfered in another culture in defiance of the Prime Directive to reshape it to his liking; to his perception of human standards.  His threat over the inhabitants -- General Order 24 -- permitted him to legally destroy the planet in question, Eminiar VII, if it didn’t comply with his choices.
This was textbook imperialism.
“Errand of Mercy” is a perfect mirror for that tale, and a refreshing look at Federation smugness. In this case, the tables are turned. Kirk finds out how it feels to have conditions imposed on him, and his choices overruled. He must live with the Organians' decision regarding war.
At first, it’s a tough pill for both Kirk and Kor to swallow.  Later, however, Kirk is chastened, realizing that he was arguing in favor of a war that would kill millions. 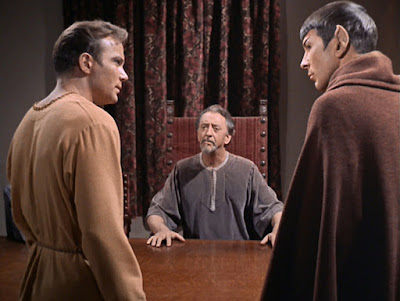 Intriguingly, “Errand of Mercy” makes mention of Armenia and the early 20th century Armenian genocide.
Specifically, Kirk fears that the Organians will suffer the same fate.  That’s why intervention is necessary; to prevent another genocide.
The irony of the episode is that Kirk's concern is misplaced, and so is that analogy. The Organians aren’t the Armenians at all in this scenario.  In fact, they are the “world” power with the authority and will to prevent deaths, on both sides.
“Errand of Mercy” is a compelling and surprising story, with a great final twist; the reveal of true Organian nature. The episode also succeeds, however, because of John Colicos’ performance as Kor.  His performance -- his choices as an actor -- basically defined, for a generation or two, what a Klingon should be, and how one should act.  He doesn't seem evil, actually, just thoroughly committed to the command structure and nation to which he declares allegiance. He is just as skilled and effective a leader as Kirk is. 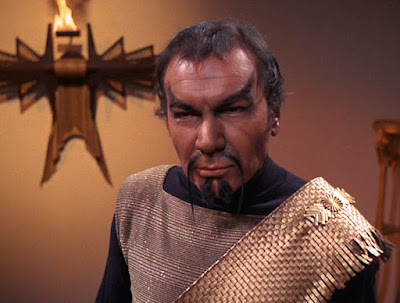 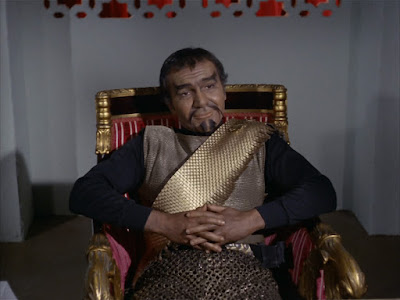 What remains less effective here is the episode’s capacity -- because of quite understandable budgetary limitations -- to depict much of the action.
Fleets gather in space over Organia, but are never seen.
A Klingon garrison occupies a planet, but we see just a half-dozen soldiers. 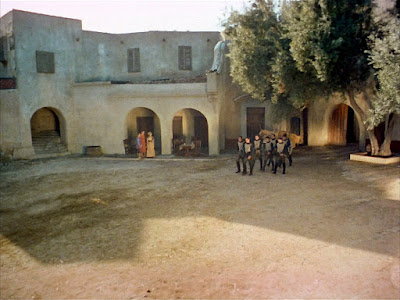 Hundreds of Organian hostages are taken to the town square to be killed, but we only hear the disruptors firing. The episode is so clever and well-performed that such limitations are only recognizable in retrospect.
at September 06, 2022