Stardate 3025.3
The U.S.S. Enterprise orbits an uninhabited planet in the Omicron Delta system, and an exhausted Captain Kirk (William Shatner) prepares to authorize shore leave rest-and-relaxation for his fatigued crew.
On a landing party with Mr. Sulu (George Takei), however, Dr. McCoy (De Forest Kelley) spies a talking white rabbit, and then a little girl who is apparently the protagonist from Alice in Wonderland.
Kirk delays the shore-leave to investigate this oddity, and soon begins to encounter several others. Sulu discovers a twentieth century hand-gun, for example. And Kirk, after reminiscing about his days at Starfleet Academy, encounters a tormentor and bully, Finnegan (Bruce Mars) and a former lover, Ruth (Shirley Bonne).
Then the unthinkable happens: Dr. McCoy is killed in cold blood by a black knight.
Enraged and in mourning, Kirk resolves to solve mystery of this strange world, where thoughts and imagination seem to take tangible form. 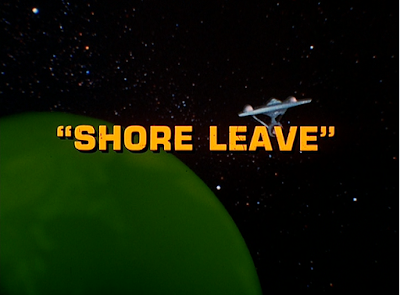 “Shore Leave” is another classic -- nay, trademark -- early episode of Star Trek (1966-1969) and one that is oft-remembered in the modern pop culture. "Shore Leave" has been parodied, for example, on Mystery Science Theater 3000 (1989-1999).
The episode's central idea, which borders on fantasy, is simply of a planet where wishes or thoughts become reality.  “Shore Leave” reveals, in its final moments, that the strange planet is actually an amusement park for an alien race, and that there is no danger of any visitors being permanently harmed. A variation of this notion -- right down to an underground “fantasy” factory for the construction  and repair of robots -- is developed in the Michael Crichton film Westworld (1972). 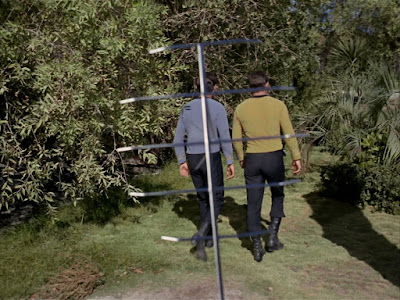 Perhaps the first thing one should understand about Theodore Sturgeon’s “Shore Leave” is that it is possessed of crazy, boundless energy.
Characters run back and forth across wide open fields on a regular basis, and Kirk has a knock-down, drag-out fight with Finnegan.  That fight is energetically choreographed and scored in an unforgettable fashion. 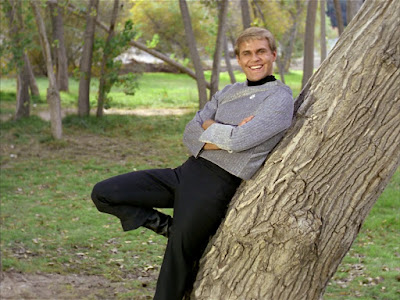 At one point in the adventure, Spock expresses exasperation with the human concept of a vacation, or rest, and his comment is illuminating about the episode itself:  “On my planet, to rest is to rest. To cease using energy,” he notes.
Humans, by contrast, vacation and relax by going on trips, or exerting themselves hiking, swimming, or undertaking other exhausting but fun physical activities. “Shore Leave” lives up to this paradox about "resting by presenting a story that never stops moving, never stops running, and which acts, finally, as a kind of physical catharsis both for viewers and the characters.  In short, “Shore Leave” is Star Trek letting its hair down and having a bit of fun.  And on that basis, it is both delightful and memorable.
“Shore Leave” also features another great line of dialogue, and one which I have repeated on more than one occasion to my brilliant nine year old son, Joel.  “The more complex the mind, the greater the need for the simplicity of play,” Kirk notes, and this is another splendid moment of Star Trek philosophy.
What does it mean?  Simply that an advanced alien race with incredible technology and knowledge need not give up fun as it evolves and matures.  Indeed, the opposite is true.
Such a race would need more outlets for fun, perhaps.  In an era wherein so many programs (from The Outer Limits to Trek itself) sometimes conflate advanced beings with emotionless sobriety, it is delightful and -- again -- cathartic, to see a tale like “Shore Leave” that champions play, make believe, and imagination as worthwhile and advanced traits.
So this episode boasts a great through-line or theme, reveals some fun back-story for Kirk (regarding his Academy days) and possesses energy, literally, to burn. It also delves into some creepy imagery, like the wax-face of the fearsome black knight. 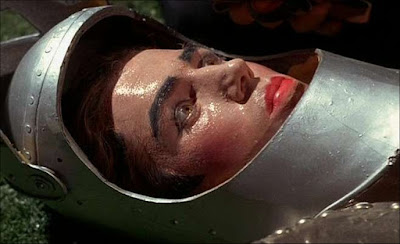 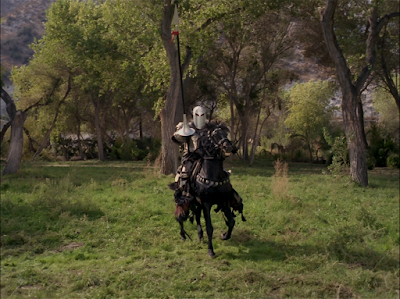 But overall, "Shore Leave' is a story much like The Voyage Home (1986) or “The Trouble with Tribbles” that practically oozes feelings of delight and happiness. There's an exuberance and looseness to the whole enterprise that is downright infectious. These stories are fun, and watching the characters go through their paces is fun too. 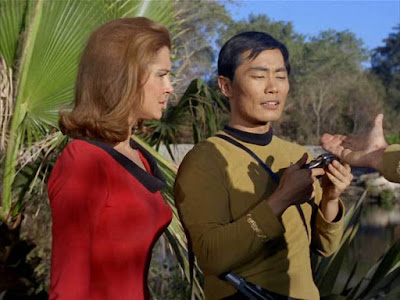 On those grounds, "Shore Leave" is unimpeachable, and worthy of its reputation as a great episode of the franchise.
On the other hand, the episode is a bit of a wreck, at least visually-speaking. This is not a big surprise, perhaps, because the episode underwent drastic rewrites even as it was being filmed...and that kind of last-minute work is never a conducive environment for filmmaking.
Here are just a few examples of the visual problems:
On at least two occasions, red spray paint is visible on the trees where the main characters are staged for action.
At about the twelve minute point of the episode -- as Kirk and McCoy are walking through the wilderness of this planet -- a straw hut is plainly visible behind them. Of course, this is a planet in which no animals and no structures are supposed to exist.
A chain leash is clearly visible around the tiger’s neck, even though it is supposed to be wild and free.
And finally, the Japanese zero plane that strafes Esteban and Angela is clearly stock footage that features not one plane, but two, and therefore doesn't match the dialogue or situation on the ground.
The worst moment in the episode may be the one in which that plane attacks. Esteban and Angela run from the bullet spray, and the staging of their attempted escape is so poor that it is not clear, upon watching, whether Angela has been hit by bullets, or Esteban has merely run the poor woman, face first, into a tree, and knocked her out.  If she were hit by bullets (which I believe is what the viewer is supposed to infer), there should be some blood on her uniform. 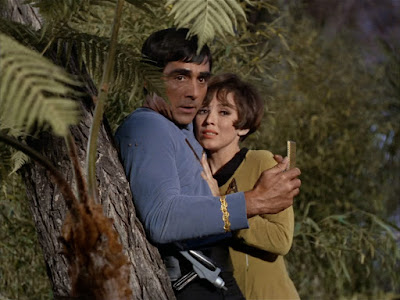 I won’t even mention the fact that the episode’s final scene resurrects Dr. McCoy but neglects to resurrect, on-screen, poor Angela Martine.
Actually, Angela’s presence in "Shore Leave" raises another question of continuity worth exploring. We initially met this character as the doomed bride-to-be in “Balance of Terror.”  Admittedly, there is quite some time between the stardates of that episode and this one, but the air date is sequential.  So viewers watching Star Trek in December of 1966 saw Angela’s groom-to-be die one week, and then saw her flirting with Rodriguez in “Shore Leave” the next week. It’s not a good impression, generally, of the character.
On the other hand, the same air date order works well in other regards. Since this episode follows up the tense “Balance of Terror,” it makes sense McCoy would conclude (to Sulu) that “we are one weary ship.”
Indeed.
Perhaps the biggest logistical problem with “Shore Leave” is that the protagonists don’t react quickly enough to the presence of things that, well, couldn’t possibly be there. There is no way -- and Kirk should know this -- that Finnegan and Ruth could appear on this far-flung planet.  Upon seeing them, he should reckon, immediately, that his thoughts are being translated to concrete manifestation.
The episode’s answer, that “we must all control our thoughts” comes much too late in the action.
Perhaps one can chalk the slow responses off to the crew’s weariness, since Kirk, at episode’s beginning, can’t even remember accurately the current stardate.
His efficiency rating is off, indeed.
“Shore Leave” is an absorbing, entertaining and classic episode of Star Trek.  It is such fun, in fact, that I feel like a curmudgeon pointing out the episode’s flaws.
Perhaps I just need to be reminded of the Caretaker’s words. The planet, and this episode too, are “intended to amuse.”
And amuse “Shore Leave” certainly does.
at September 05, 2022