Stardate: Armageddon
The Enterprise rushes to Beta XII-A, a Class-M planet that purportedly houses a Federation colony under attack.
Captain Kirk (William Shatner) beams down to the planet with a landing party, including Mr. Chekov (Walter Koenig), only to find that no colony appears to exist there.
Soon, Klingons show up on the planet surface as well, claiming that their vessel in orbit was crippled by the Enterprise. The Klingon commander, Kang (Michael Ansara) claims Kirk’s ship as a prize, and orders Kirk to transport his survivors aboard.
Kirk does so, but surreptitiously arranges with Spock (Leonard Nimoy) for security guards to be stationed in the transporter room upon beam in. The Klingons are captured upon completion of transport.
Soon, however, strange things begin to occur on the starship. The Enterprise accelerates to Warp 9, on a heading between galaxies. Meanwhile, nearly 400 crewmen are trapped on the lower decks. Also, Chekov thirsts for revenge against the Klingons over the death of an imaginary brother.
Matter is transmuted too, in a dangerous fashion. Phasers are transformed into swords and other bladed weapons.  Soon, it is all-out, bloody war aboard.
Spock detects an alien life form aboard the vessel, and Kirk and the others realize that a creature who thrives on negative emotions -- vengeance, hatred, racial prejudice -- is trapping the Klingons and Starfleet officers in an eternal, bloody war. 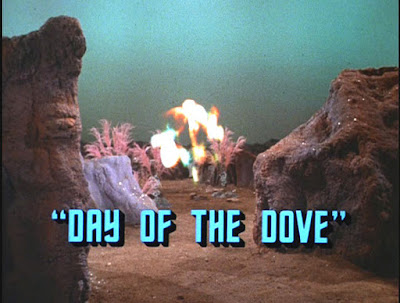 “Day of the Dove” is another strong Star Trek (1966-1969) episode of the third season. The audience encounters the most imposing Klingon commander since Kor -- Anasara’s Kang -- as well as the first (and only) Klingon female seen on the series.
Similarly, viewers see the first instance of “intra-ship beaming,” in this episode, a mode of transport that would become a de-facto aspect of 1980’s and 1990’s Trek.
Most importantly, however, “Day of the Dove” presents another tale that suggests Klingons and humans will share a future of friendship and peace. Here, Kirk and Kang go to war, only to reconcile when they realize that the alien life-form is manipulating them.
As Kang notes “only a fool fights in a burning house.”
The remarkable optimism (and really, pragmatism) of Star Trek is featured beautifully in “Day of the Dove.” Mara (Susan Howard), knows of the Federation only from Klingon propaganda, but ultimately proves persuadable by facts and logic. Both Klingons and Starfleet officers prove reasonable -- and humane -- in the face of war. We see the “enemy” as human, in the sense that Mara and Kang are devoted to one another, and love one another. 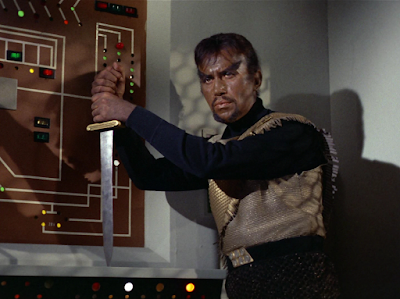 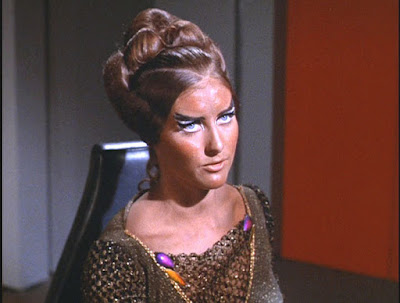 As I like to write in these reviews, this is no small matter.
Star Trek was produced at the height of the Cold War, not long after the Cuban Missile Crisis. It would have been easy to feature the Klingons, the Soviet “team,” as a force akin to pure evil. Star Trek, instead, does two things.
First, it characterizes the “enemy” as not, necessarily, bad…only different.
Second, the series suggest that no one benefits, in the long run, when people go to war. The Klingons and UFP don’t have to love one another -- or live like one another -- but they can find room to live in peace, and respect their differences. “Errand of Mercy,” “Day of the Dove” and The Final Frontier (1989) all suggest that these unlike beings can co-exist in peace. It may be an uneasy peace at times, but it is peace nonetheless. 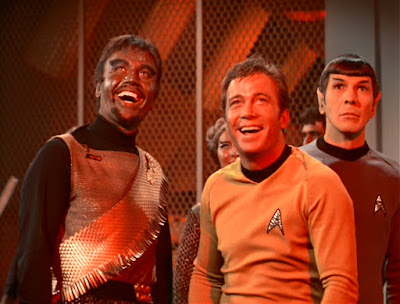 It is not difficult to read “Day of the Dove” as a reflection of domestic events in America during turbulent 1968, either. There were riots in more than a hundred American cities following the murder of Civil Rights leader, Dr. Martin Luther King, Jr. (April 4), for example. Then there was the Democratic National Convention violence in August, during which early ten-thousand anti-war protesters battled 23,000 policemen in Chicago.
The temperature in America needed to be turned down. Violence was out of control, irrational and irrevocable.
Accordingly, “Day of the Dove” works on a beautiful, metaphorical level. Logically and rationally, the opposing forces aboard the Enterprise know it is illogical and non-productive to fight. And yet, emotionally, they are driven to rage, to feelings of race superiority and hatred.
The alien life-form grows “red” over these hot emotions, sucking up all the hatred and prejudice it can get. 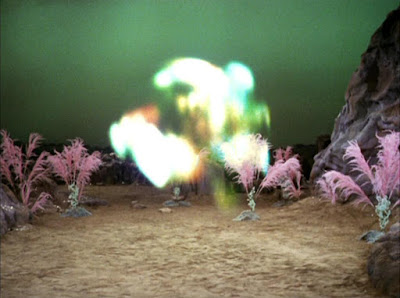 “Only a fool fights in a burning house?”  In this case, it looked a lot, in 1968, like America was that burning house.
Kirk states at one point in “Day of the Dove” that this alien life form must be responsible for a lot of “human history,” and that puts a fine point on the matter.
On one hand, one might be inclined read the statement as a cop-out, saying that human nature isn’t responsible for human violence. Instead, this alien is responsible.
My preferred reading, however, goes back to the metaphorical level. Irrational, bloodthirsty feelings of hate, racial superiority and vengeance are indeed responsible for a “lot of human history.”
The alien creature just turns up the heat on those things, but the factor of the matter is that such ugliness is part of us.  The alien doesn’t create those feelings.  It merely augments them. 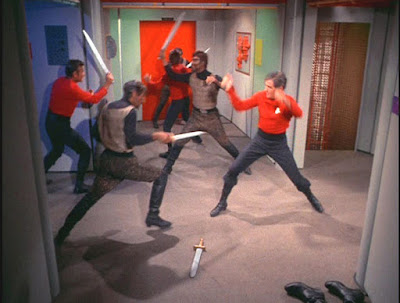 That’s what, I believe, “Day of the Dove” is really all about; the idea that for too much of our history, we have let our red hot tempers and emotions boil up, overruling our reason and logic.
We can apply the situation to the Cold War, or to the divisions in America of 1968.  In whatever way you choose to parse it, however, Star Trek is once again clearly commenting on its social and historical context.  And, once again, it is saying that we are at our best when we offer peace to our “enemies,” instead of just more warfare.
That’s why I love Star Trek. In shows like “Day of the Dove,” we don’t win when we kill the enemy. We win when we realize we can outgrow killing, and seek common ground.
at September 09, 2022