Star Trek Week: "This Side of Paradise" 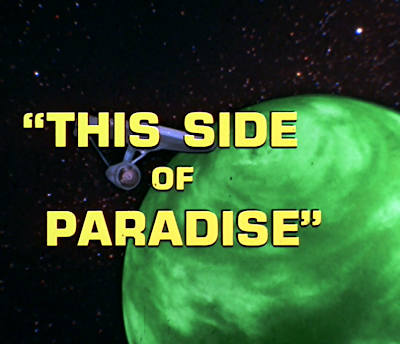 This 25th episode of Star Trek (which first aired March 2, 1967) sees the U.S.S. Enterprise arrive at planet Omicron Ceti III. The crew had expected to find the colonists assigned there dead due to exposure to poisonous Berthold Rays, but instead, everyone on the planet appears healthy, happy, and content.

The rub, of course, is that alien plants -- spores -- are keeping the human colonists alive. But the spores are strange parasites that also take away the colonists' will to work, to produce, to do anything but experience constant bliss. Is it an idyllic existence..or a trap, an inhuman nightmare?

As Captain Kirk (William Shatner) puzzles this mystery out, Spock (Leonard Nimoy) encounters an old flame, Leila Kalomi (played by the lovely Jill Ireland). On Earth, and in public, Spock could never acknowledge that he loved this young woman, but once infected by the Omicron spores, Mr. Spock can finally do just that. He can finally be happy.

Unfortunately, when the deleterious spores are transported aboard the Enterprise, they cause a suddenly euphoric crew to mutiny, leaving stubborn Captain Kirk all alone on his ship, determined to remove the influence of the spores once and for all... 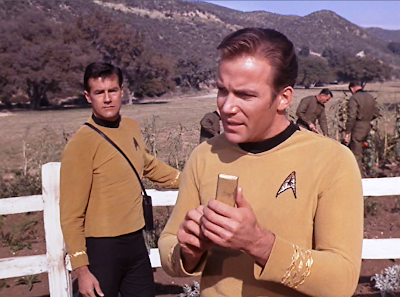 "This Side of Paradise" came about late in the first season, after the series original story editor, John D.F. Black had departed. So had the series' second story editor, Steven Carabatsos. Accordingly Gene Roddenberry approached D.C. Fontana about Nathan Butler's story, and told her that he wanted a major re-write on it, and that if she could do it on time -- and to his satisfaction -- he would promote her to story editor. She did the job. And how.

Originally, the story had involved George Takei's character, Mr. Sulu, and was called "The Way of the Spores. Dorothy Fontana, whom I interviewed in 2001, told me how she changed the episode:

"I read the script and Gene wanted to know my opinion about it. I thought about it and realized that there were a couple of things that weren't working. The love story really had to be about Spock because the situation of the spores offered an opportunity for us to get to his emotions. And as a result of the character switch, the love story just worked."

"The other thing was the technical part of the show," Fontana recounted to me. "How do the spores infect the people? In the original story, you had to go into a cave where the spores were, to be compromised. The answer to that problem was, simply, don't go into the cave! But if the spores were ubiquitous, if they were all over the planet in this flower form, you couldn't escape them. They were going to get you one way or another." 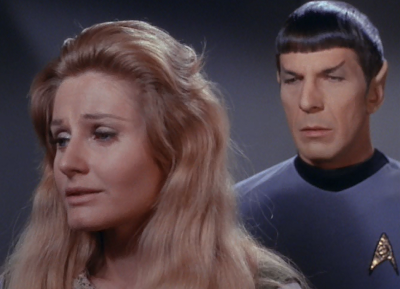 As anyone who has seen this episode can attest, the coda on the bridge is one of the most emotional and touching of the entire Star Trek canon. Spock admits he has never before been truly happy. If you don't get a lump in your throat over that line (and Nimoy's direct delivery of it...) you really are a Vulcan with green ice-water in your veins.  Although the Uhura/Spock relationship in the new Star Trek (2009) is delightful, it certainly undercuts the character history as this episode suggests it.  Clearly -- in that alternate universe -- Spock has experienced happiness.

"The spores gave us an opportunity to see the softer side," Fontana considers, "to find out about the emotions Spock could have."  And indeed, this knowledge that Spock is not a robot, that he suppresses his emotions (also revealed in "The Naked Time"), makes the character far more sympathetic.

The visuals highlighting episode are also powerful ones in regards to Spock's relationship with Leila.  In one very well-done shot, for instance, a spore stem intersects the frame vertically down the middle, splitting up Spock and Leila.  The composition which suggests that they can never be together except in a place where spores dominate. 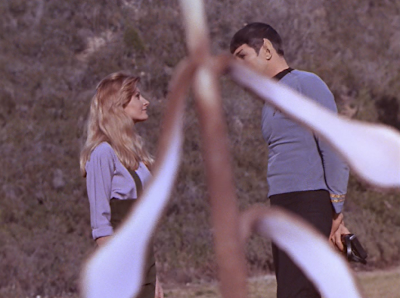 Not only is there Spock's first "romantic" relationship to reckon with in "This Side of Paradise," but the episode's social commentary suggests that mankind is an animal who must work, who must toil, who must constantly strive if he is to endure.  We can't go back to the Garden of Eden and live in innocence and bliss.  There are mountains to climbs, roads to build, planets to explore.  The struggle to climb the next summit is the quality that defines us as a species.

A great moment in the coda is Kirk's reflection on the Omicron Ceti III experience. "Maybe we weren't meant for paradise," he suggests, and, indeed, this is a line that resonates all the way through the Star Trek franchise. As late as Star Trek VI: The Undiscovered Country (1991), Spock seems to be thinking about this very notion. He hangs a painting in his quarters - the expulsion from Paradise. A reminder to him, at that point, that all things must end.

There are Star Trek episodes of cosmic importance -- space battles with Romulans and Klingons and so forth -- but there are few episodes with more heart or humanity than "This Side of Paradise."

Spock's first experience with happiness is unforgettable, and indeed, haunting. 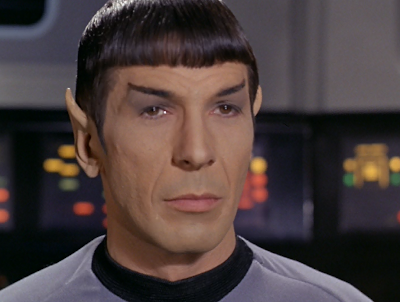