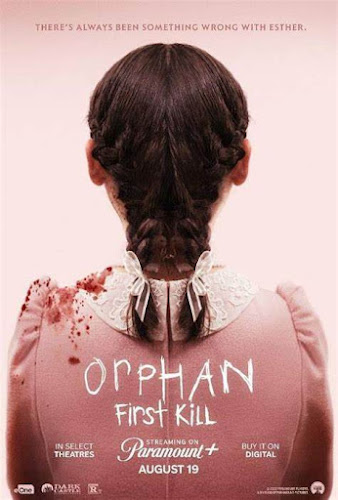 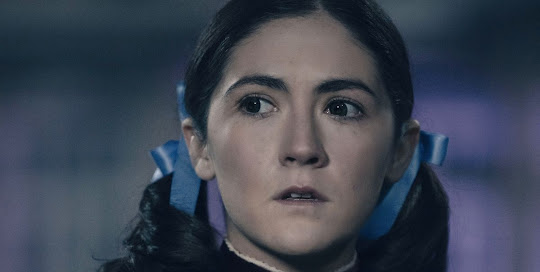 Is Orphan: First Kill, a retread of its 2009 original as the trailer implies? NO, ma'am. This twisted film may pretend that it's the same movie with a different cast, but this prequel has a joker up its sleeve. Unfortunately, it probably needs a few more cards up there to really knock the audience's socks off.

A prequel to the hit thriller Orphan, the film establishes how Esther coined her name and started her reign of terror on the All-American family. After escaping a mental institution in Estonia, Leena (Isabelle Fuhrman again, playing 30 instead of 32, but thanks to CGI and make-up, still looking like a child), scours the internet for missing children and discovers that lost Esther looks just like her. She enters the US after claiming to be the abducted child.

Esther's father (Donald Sutherland's son, Rossif) melts at the sight of his "child" and bonds immediately, but mother Tricia (Julia Stiles) suspects everything is not right with the girl. Esther kills off those who can reveal her secret, but then she discovers that she is not as in control of the situation as she thought.

Back in the 2009 film, Esther — the sweet little girl hiding an evil secret — was the interloper, invading the pure nuclear family. But we live in a new America, and even with this film taking place in 2007 (two years before the first film), First Kill mirrors the mores of today's crumbling society, where corruption is ubiquitous and you can't tell the villains from the victims.

Fuhrman continues to be the perfect bad seed, with a cherubic face, open eyes, and a kind smile … but she's a viper who takes pleasure in the kill.

The screenplay by David Coggeshall relies too much on the twist and doesn’t give enough story to warrant a second viewing. At 90 minutes, very little happens other than the 180-degree switch at the halfway point. The characters aren't as intriguing as they could have been, so in the light of day, the plot doesn't really impress after the adrenalin of the surprises wear off.

Director William Brent Bell enjoys his little visual tricks, like the flashing red light turning up the tension in the opening sequence, and the reflection of the villain in the eye of the victim.  But like the writing, the direction relies on the tone's key change to keep the momentum going as opposed to putting in the work.

The creators of Orphan: First Kill gave its producers a wicked pitch line that must have led to the moneymen jumping on immediately. A great film builds off its shockers, while this film unfortunately just coasts down from its abrupt climax.