Stardate 4202.9
While in close proximity to the L-370 star system, the Enterprise encounters the disaster beacon of the U.S.S. Constellation, a Constitution class starship under command of Commodore Matthew Decker (William Windom). Decker alone has survived an attack on the Constellation from a giant automated device soon referred to as “the planet killer.”
Decker is wracked with guilt and grief over the loss of his crew, and the near-destruction of his ship. After he beams back to the Enterprise, however, Decker relieves Mr. Spock (Leonard Nimoy) of command when the planet killer returns.
Captain Kirk (William Shatner) and Scotty (James Doohan) -- who have remained aboard the Constellation -- struggle to make the ship operational as Commodore Decker takes the Enterprise into a futile and deadly engagement with the alien device, which will not run out of power so long as it has planets to consume.
With Decker hovering on the verge of madness, Kirk orders him relieved. Meanwhile, Kirk speculates that the planet killer is a “doomsday machine” belonging to a long-dead culture, perhaps from another galaxy.
That culture, he believes, never meant to launch the device, a device that ensured the destruction of its own makers. 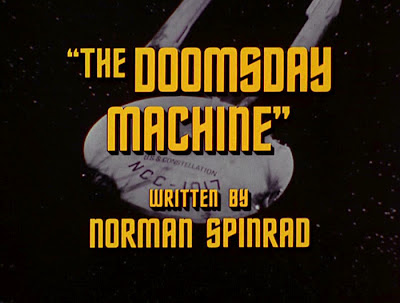 Written by Norman Spinrad, “The Doomsday Machine” is another absolutely great episode of the original Star Trek (1966-1969), and certainly one of the top ten titles in the Original Series canon.
Many Star Trek episodes contend with the Enterprise encountering and engaging some kind of planet-threatening opponent (“The Changeling,” “The Immunity Syndrome” and “Obsession” for example), but “The Doomsday Machine” is the finest and most suspenseful of this bunch, for many reasons.
Much of the tension arises from a human catalyst, in this case: Commodore Matt Decker. 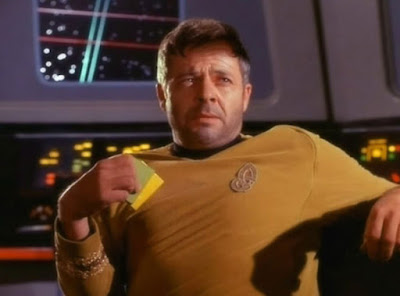 William Windom portrays this character, survivor of the doomed Constellation, with real flair.  He plays a fallible, desperate man seeking redemption. The problem, of course, is that there can be no redemption because of the nature of this enemy. Decker didn't make a mistake in judgment in his engagement with the Planet Killer.  He faced, actually, a no-win scenario.
In an effort to assuage his guilt over his mistakes, Decker takes the center seat on the Enterprise and blunders into the same mistakes all over again.  He finds himself positioned to lose a second starship, because no single vessel can successfully engage this opponent.
Windom plays Decker as a hard-as-nails authority figure, but one without, necessarily, the capability to look at himself in the mirror.  His poor treatment of Mr. Spock throughout the episode also hints at some form of prejudice towards Vulcans, or perhaps just non-humans. Decker orders Spock to his station (at the command chair) quite dismissively, almost like a dominating pet owner summoning his animal.  The man is stubborn and arrogant.
Decker is also a physical threat, as his scuffle with a red shirt in an Enterprise corridor depicts. A physically fit man, and one with cunning, he is a powerful opponent.
But though we disagree with Decker's choices, once in command of the Enterprise, the great aspect of Windom's performance is that we can detect precisely why this man would rise to the rank of Commodore in Starfleet. He possesses a spine of steel. You can practically detect it just listening to Decker's log entry reports, played back on the Constellation.
What do we hear? Total confidence.  The episode is so effective because a man of total confidence and authority encounters something that destroys his sense of self; his very identity.  The Planet Killer's power not only ruined the Constellation, it destroyed Decker. 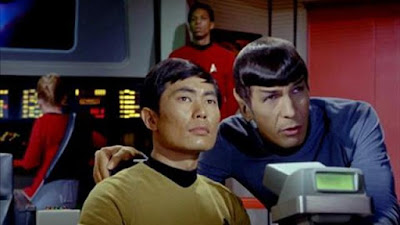 And yet, through all the interpersonal conflict depicted here, one never considers Decker an evil man. Decker is very human -- and relatable too -- because he is tormented by guilt and shame.  Before this incident, Decker never lost a command.  Now, he has lost everything.
Even though we agree with McCoy and want Decker physically dragged from the bridge, we can understand why he wants to take command of the Enterprise and destroy the planet killer.  It would be one way to avenge his crew, and assuage his own guilt for failing his people.  His plan, alas, is irrational, and bordering on suicidal, which is why Spock ultimately finds the grounds to relieve him.
Still, Decker is a great foil for Spock and Kirk precisely because he isn’t evil. Instead, he is a man who does things his own way, as any captain would. But his way seem wrong for the situation, and for the Enterprise.  He has tunnel vision.  He can only see the destruction of the Planet Killer, and not the fact that one ship alone can’t accomplish the impossible. 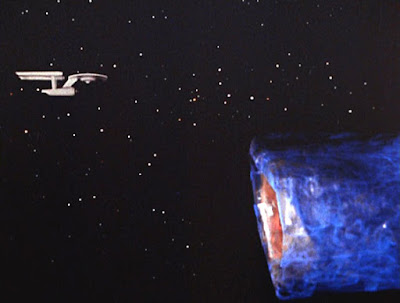 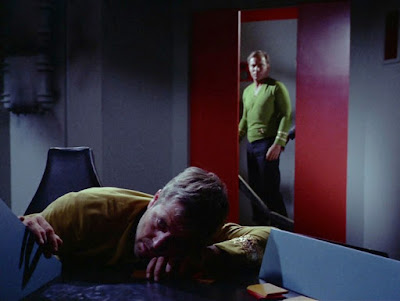 Beyond the personal fireworks, “The Doomsday Machine” succeeds on the basis of its plot-line, which -- as usual -- is allegorical in nature.
Here, Kirk speculates about aliens locked in a deadly war.  They developed a weapon so fearful that it was meant to terrify the enemy, but never actually be used.  He then likens the Planet Killer to the old “H-Bomb” on Earth, specifically, and that’s the real meat and potatoes of the episode.
Lest we forget, Star Trek aired on NBC during the Cold War, when the United States and the Soviet Union were trapped in a kind of existential deadlock; ready to use nuclear weapons, but simultaneously knowing that a nuclear exchange would trigger the end of the world.
Here, however, aliens “pushed the button” and unleashed a weapon of mass destruction that ultimately came to outlive them.  Although they were destroyed, their Frankenstein Monster continues in another galaxy, still destroying planets, still imperiling life.
The important idea here is that, like man, these aliens developed weapons faster than they honed their “wisdom,” and they annihilated themselves.
As always, then, Star Trek has pinpointed an illuminating way to discuss our present, while presumably concerning the world of the future.
Another incredible highlight of this episode is Sol Kaplan’s  tension-provoking score, which escalates the episode’s suspense, and in some way seems to forecast the score for Jaws (1975). Both the Doomsday Machine and the Enterprise get identifiable musical themes in the episode, and very soon these ships (and their themes) are pitted against one another, in direct opposition.  The Doomsday Machine's theme sounds a lot like the great white shark's theme, from the Spielberg picture.
In terms of my own interests, I always love this episode for showcasing another Starfleet vessel: the Constellation.  I like the idea of discovering a wrecked sister ship, and Scotty and Kirk nursing her back to health, just in time for her to be useful in combat against the Planet Killer.
Why do I enjoy this so much?   I suppose because of the implied lesson for Kirk.  Whenever the Enterprise comes across a crippled starship, there’s always a “there but for the grace of God…” quality or factor.
What if the Enterprise had encountered the Planet Killer first?
Would it be Kirk overcome with guilt, having lost his crew?
One of the story notes that intrigued me most about Star Trek Beyond (2016) was the idea of Kirk encountering something new and dangerous, and not being able to pull the Enterprise through.  In the prime universe, the U.S.S. Enterprise survived five years of threats like the Planet Killer without being destroyed. In the Kelvin universe, the Enterprise is destroyed three years into the mission.
That’s a change that has major repercussions, and one that also affects Kirk as a character, and as a human being.
I realize that other fans disagree with me, on the next subject but I am glad that new(er) effects were added to this episode recently. 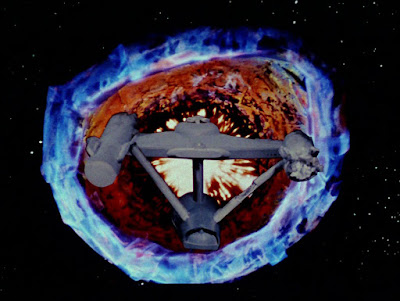 There is so much going in, character-wise and philosophy-wise in “The Doomsday Machine,” but the special effects are critical to this episode's success.
"The Doomsday Machine" is basically an hour-long engagement between the Planet Killer and two Starfleet vessels.  The older effects (utilizing an AMT U.S.S. Enterprise kit for the Constellation) look wobbly at best today.
The re-done effects, in my opinion, give added life and vitality to this 49 year old classic. They give it a new shine, and allow other facts -- like Windom's performance, and Kaplan's score -- to shine again.
at September 07, 2022