Star Trek Week: "That Which Survives"

Stardate: Unknown
The U.S.S. Enterprise investigates a strange “ghost planet” which possesses unusual geological properties.
After Captain Kirk (William Shatner), Dr. McCoy (De Forest Kelley), Mr. Sulu (George Takei) and Lt. D’Amato (Arthur Batanides) beam down to the planet’s surface, a devastating earthquake strikes.
At the same time, the Enterprise is hurled 990.7 light years away, with Mr. Spock (Leonard Nimoy) in command.
Behind the unusual mystery is a lovely siren, Losira (Lee Meriwether), a woman whose touch can kill.
Losira is able to appear both on the distant Enterprise, and the planet surface, and she brings death to Enterprise crew at both locations.
While Spock and Scotty (James Doohan) struggle to get the Enterprise back to the planet with all due haste, Kirk and his party struggle to survive Losira’s murder attempts.
As Kirk soon learns, Losira is a Kalandan, or a more accurately, a simulation of a long-dead Kalandan commander; one programmed by a computer to protect this distant, long-forgotten outpost of the Empire. Her people died out after creating an artificial planet, one that gave rise to a terrible disease

“That Which Survives,” like “Plato’s Stepchildren,” seemed to be on near constant-rotation on WPIX, Channel 11 out of New York City, in the 1970’s and 1980’s when I was first becoming acquainted with the series as a young man.
I remember one occasion when the station actually aired "That Which Survives" two Saturdays in a row, in a 6:00 pm time slot. I was not a happy camper. I wanted to see different Trek episodes; not the same episode twice in two weeks.
Still, “That Which Survives” isn’t a terrible episode by any means, though nor is it often considered a great one. Overall, it’s a solid entry in the third season, for certain, and one buttressed by some fine qualities, notably a guest cast that sees the return of Booker Bradshaw’s Dr. M’Benga, and the introduction of memorable characters played by Arthur Batanides, Naomi Pollock and, of course, Lee Meriwether. 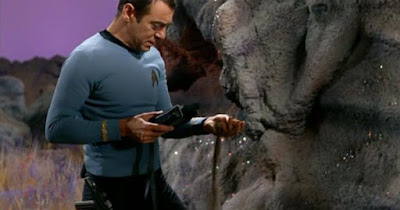 The episode is cast perfectly, and there is some considerable suspense in the last act (with Sulu injured, and the Enterprise on the verge of destruction.) 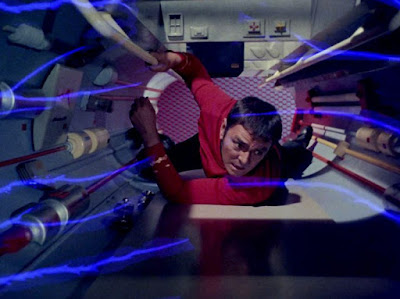 Also, “That Which Survives” features some remarkable special effects, particularly Losira’s unusual de-materialization process.  The character seems to flatten out, and contract "down" into a line, before vanishing all-together.
I also appreciate the purple color palette of the episode, seen in Losira’s wardrobe and the alien planet's sky/horizon. If one thinks of the color purple representing mystery, or, possibly ambition, the color scheme fits in thematically with a story of a “ghost” alien race that engineered its own destruction. 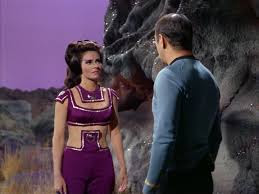 But I suppose I enjoy the episode “That Which Survives” in particular for how it fits in with the Trek chronology or history, at least on a speculative level.
In broad strokes, I see the development of the human race as one of technological thresholds/challenges that are met, and overcome. We develop fire. We develop gunpowder. We develop nukes. We develop FTL drives.
And then?
We develop the ability to create and recreate planets.
In “Return to Tomorrow,” for example, Sargon spoke of a crisis in his civilization beyond the nuclear age. I wonder if this mysterious crisis involved technology akin to what we encounter here, in “That Which Survives,” among the Kalandans. These aliens created, essentially, a world; but the creation of that world saw the rise of a disease that killed him.
We know that Starfleet faces similar challenges in the Genesis incident of the movies, striving for the ability to create a planet, but seeing unintended side effects caused by proto-matter.
Does this mean that Starfleet and the Federation have passed the threshold that felled the Kalandans and Sargon’s people?
If so, I wonder what the next challenge is…
Clearly, not all humanoid civilizations survive each of the thresholds I named above. We come back to, again and again in Star Trek, a race between technological development and human development.
If technology changes or advances too fast, humankind might destroy itself.
Losira is a fascinating personification of this very struggle. 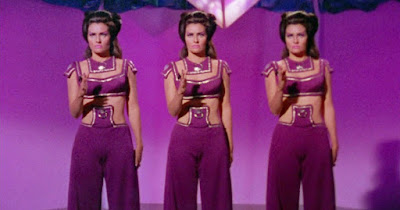 In real life, she was an ethical, stable, responsible commander who safeguarded her people. Losira clearly took her duties and responsibilities seriously.
Her computer avatar -- designed, apparently to recapture something of her personality -- is, by contrast, programmed to murder.  Clearly, the “human” part of that program feels regret, guilt, and shame at her actions.  Kirk is able to exploit this part of the program to survive as long as he can.
Thus Losira is a representation of dangerous technology at the same time her “human” qualities endure, and carry meaning and fight for supremacy with "the machine."  She “survives” beyond technology, in a sense, even if her world, and people do not do so. 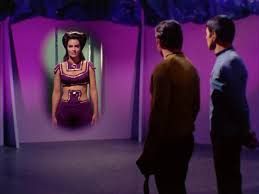 “That Which Survives” may not fare better in the memory, or among fans, simply because it doesn’t feature any “trademarks” we associate with Star Trek. There are no Klingons and no creatures, so-to-speak. Plus, Kirk and Spock spend the majority of the episode far apart from one another, unable to interact meaningfully.
On the Enterprise, however, Spock gets some great, deadpan funny lines, and on the planet, Kirk is the strong leader and curious explorer we root for. Scotty comes across powerfully in this episode too, which adds to the subtext about human and technological development.
Scotty, who is as human as they come, is also "in synch" with the technology he loves: the Enterprise's engines.
In the final analysis, "That Which Survives" "endures. This is a solid show, even if it is not a beloved one.
at September 09, 2022