2310 Days after Leaving Earth Orbit
Moonbase Alpha explores a planet in its “West Quadrant.” The world appears habitable, but Commander Koenig (Martin Landau) places a strict quarantine on the food, water, and minerals found there while Alphans learn more.  The planet also contains at least one mystery: a mysterious structure buried beneath a layer of rock.
While exploring the planet, Security Chief Tony Verdeschi (Tony Anholt) gets in a scuffle with another Alphan, after that Alphan stares a strange, glowing light.  Tony spots the same light, and goes mad as well. He becomes violent and paranoid.
Soon after this, the very planet itself seems to transform, becoming increasingly inhospitable to the Alphans. The metals on the Eagle start to corrode too, making an escape from the planet impossible.
Tony, meanwhile, is dying from “brain cell expansion” because of the alien light he witnessed.
As the planet transforms into an “ecological disaster,” Helena Russell (Barbara Bain) and Maya (Catherine Schell) mount a daring rescue mission to the surface in a re-entry glider, a vessel with no metal parts to corrode.
When the Alphans are able to activate the solar cells on the mysterious structure, they enter it to find the log recordings of a dead alien race.
This world was once considered for alien colonization plans, but its nature began to grow altered, killing them as it has now started killing the Alphans.
The dead aliens warn from their logs that there is “only one way out of this pitiless world….death.”
Koenig, however, finds another way.
He learns that a strange alien being composed of light is responsible both for Tony’s insanity, and the reshaping of the planet’s biosphere.  He hatches a plan to communicate, but it will be dangerous... 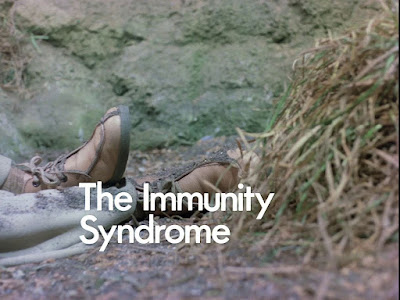 “The Immunity Syndrome?”
Where have I heard that title before?
Seriously, this is a strong and engaging episode of Space: 1999’s Year Two, but it would have met with better success, perhaps, under its original (Johnny Byrne) title: “The Face of Eden.” The episode should never have been named after a Star Trek episode, especially as the (fascinating) story has at least one element already in common with Star Trek: an alien being composed of light who, inadvertently, causes insanity when humanoids gaze upon it (“Is There in Truth No Beauty?”) And Freiberger was involved in both episodes.
That commonality aside, this is a fascinating episode of the series. Although "The Immunity Syndrome" repeats a narrative plot point from “Space Warp” (aliens who leave behind logs of their destruction, giving the Alphans the clues they need not to make the same mistakes), the episode is intriguing, and well-produced.
Once more, the special effects are astonishing for their era. In this case, we see the crash-landing not only of an Eagle, but of the new miniature for the show, the re-entry glider. 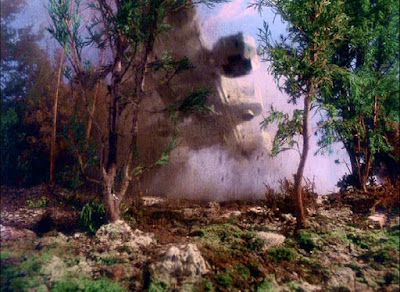 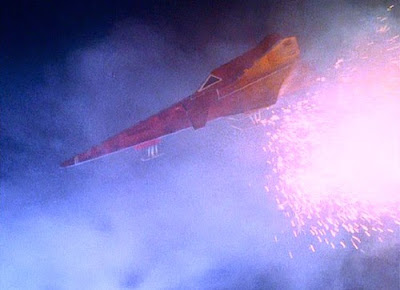 Although one might again ask questions about execution here -- particularly regarding Koenig’s silly-looking protective suit in the last act, or the voice acting of the inadvertently destructive alien -- overall the episode plays as effective. The stakes are high, and the conflict arises not from malicious intent, or evil aliens, but from misunderstanding, paranoia, and a difference in alien nature. The alien does not know that its appearance is fatal to the humans, and feels guilt when it learns that this is the case. 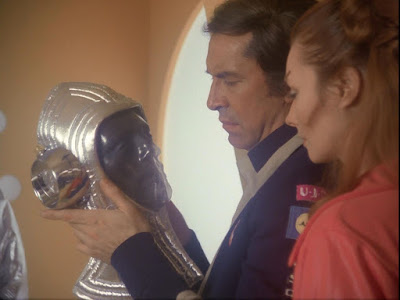 The episode also succeeds on a character-basis. Helena and Maya transmit particularly well in this segment, risking their lives to get to the planet and save John and Tony. They don’t waver or hesitate, they act…even though great danger is involved.
And I love the scene in which Bill Fraser (John Hug) risks his life piloting an eagle to get them closer to the best re-entry position. The feeling, as is the case in the best Space:1999 episodes, is of a community working together, loyally, taking risks for one another. 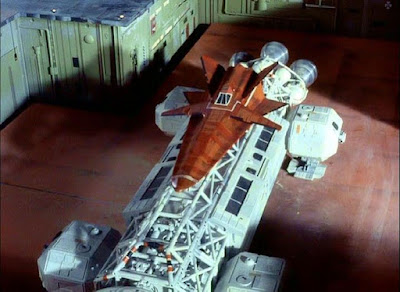 The episode also provides some interesting background information on Tony Verdeschi, a character who was perhaps never developed as fully as fans might have liked.
We see a data screen or two on Helena’s medical computer in “The Immunity Syndrome” and it reveals that Tony earned a PhD at Cambridge, in 1993, after attending the University of Rome in 1990. We also learn that he was born in Florence, and that his full-name is Anthony Dean Verdeschi.
In addition to this character information, “The Immunity Syndrome” also finds time to give Alan Carter interesting work to do, including excavating and operating the solar panels of the alien structure. He also has a great moment of danger, when an Eagle control corrodes and snaps off in his hand...while he is in flight.
From exploding commlocks, to eagle crashes, “The Immunity Syndrome” exemplifies the best potential of Space: 1999 Year Two: It features good character interaction, a solid science fiction story, and a ton of well-choreographed action.
at September 14, 2022