Star Trek Week: "By Any Other Name"

Stardate 4657.5
The U.S.S. Enterprise answers a distress call from an uninhabited M-class world, only to be waylaid by an advance scouting mission from the Kelvan Empire, a powerful political force in the distant Andromeda Galaxy.
The Kelvans are led by Rojan (Warren Stevens), a commander who uses his people’s advanced technology to reduce the vast majority of the Enterprise crew to cuboctahedron blocks. These small blocks store their patterns for later restoration, leaving only the command crew intact.
Rojan’s plan is to take the Enterprise through the barrier at the edge of the galaxy, to Andromeda, a trip which will take 300 years.
However, to make this lengthy journey, Rojan and his people have assumed human form, and Captain Kirk (William Shatner) realizes that with human form comes human emotions.  With the help of his crew, Kirk seeks to sow emotional instability in the Kelvans and re-take the ship.
To that end, Scotty (James Doohan) introduces one Kelvan, Tomar, to alcoholic beverages. Meanwhile, Kirk sets his sight on seducing Kelinda (Barbara Bouchet), an act which stokes Rojan’s feelings of jealousy... 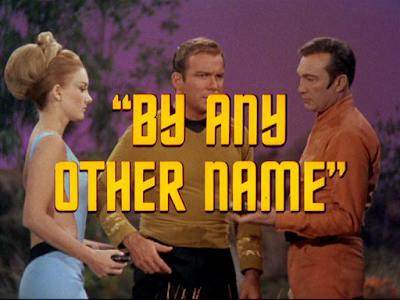 I can -- and will -- the count the ways that I absolutely love “By Any Other Name,” an episode from Star Trek’s (1966-1969) late second season.
This season sees many attempts at overt humor (from “I, Mudd” to “A Piece of the Action” and “The Trouble with Tribbles”) but in some ways, this episode -- from Jerome Bixby and D.C. Fontana -- best transmits the series’ sense of humor without going overboard into silliness or over-the-top performances.
The episode’s good humor derives, specifically, from an acknowledgment of the crew’s human foibles, and the way that the characters deploy those foibles to extract themselves from a crisis.
To put it another way, the way that the crew defeat their enemies in “By Any Other Name” is to bring their own special quirks and gifts to the problem. We have seen this formula work again and again in Star Trek, in The Search for Spock (1984), The Voyage Home (1986) and recently in Star Trek: Beyond (2016).
Here, Kirk, Spock, Scotty and McCoy each get to be at their mischievous, ornery, cunning, hilarious best in order to knock down the antagonists of the week. It’s true that aliens who don’t understand human emotions are a familiar trope in sci-fi TV, but that scenario nonetheless allows for some great comedy in “By Any Other Name.” 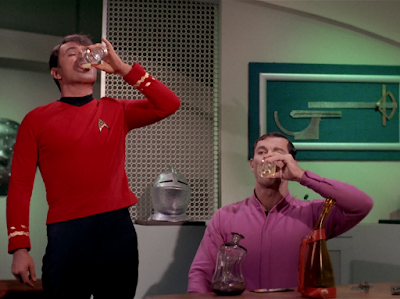 Scotty drinks Tomar under the table, (and utters the famous line “it’s….green,” regarding some alien type of alcohol), and Kirk -- of course -- goes for the pretty lady, teaching Belinda to kiss.  This is a lesson he has taught before (see “The Gamesters of Triskelion.”)
Spock, meanwhile, dispassionately and logically gets to Rojan, spurring his jealousy and paranoia.  And Dr. McCoy enacts a little medical tomfoolery on Hanar (Stewart Moss) that has the poor Kelvan climbing up the walls and becoming a hypochondriac. 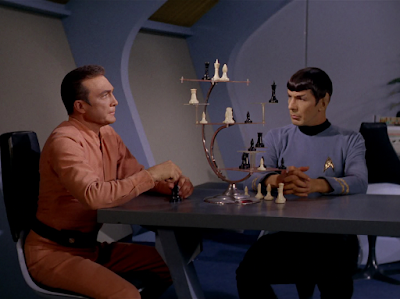 In the end, these efforts enough to retake the ship, and a thorough victory for Kirk and his crew.  The humor is adroit too, particularly in the climactic moment when Rojan hurls Kirk into Spock and Bones in the briefing room doorway
They catch him, and Kirk says “I’m stimulating him.”
Delightfully, they heave Kirk right back into the thick of the fight, to continue his campaign of emotional overload.
But if the comedy works so well in “By Any Other Name,” and clearly, it does, the episode succeeds too on a few other fronts.  Namely invention and continuity.
On the subject of invention, this episode presents the unforgettable notion of transforming human beings into small cuboctahedrons which can store their biological information.  The special effects are powerful in the depiction of these (delicate) blocks, as we see beloved characters (including Chekov and Uhura) reduced to these powdery things.
And, of course, we are introduced to the small blocks through one of the nastiest reveals ever to be featured on Star Trek. 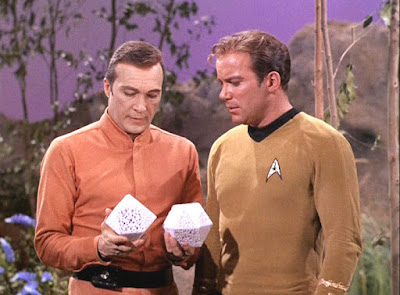 Specifically, on the planet’s surface, Yeoman Thompson (Julie Cobb) and a security guard Lt Shea (Carl Byrd), are reduced to the cuboctahedrons, and one block is crushed by Rojan.  When the survivor is restored, we see that it is the male, Shea, meaning that the young, frightened Yeoman Thompson was the victim.  This moment carries tremendous impact both in terms of establishing Kirk’s feelings of responsibility, and the power of the Kelvans.
In terms of continuity, “By Any Other Name” clearly remembers a great deal of Star Trek history. For example, the incidents on Eminiar 7 (from “A Taste of Armageddon”) are recalled here, as Spock attempts to place a (false) thought into the mind of a captor, Kelinda.
Later, the Enterprise leaves the galaxy, and encounters the barrier seen in the pilot episode, “Where No Man Has Gone Before.” This is an especially nice touch, from a continuity standpoint. The Enterprise looked different,  and the crew had different uniforms (and in some cases, different jobs) in that story.  This episode suggests, however, that they still take place in the same universe, meaning that Starfleet boasts a history of updating its technology, uniforms, ships and so forth.   The universe seems more "real" because of these developments, at least in my eyes.
I also find “By Any Other Name” worthwhile because of one particular scenario involving Kirk and his top officers.  They have all agreed that the Enterprise cannot remain in Kelvan hands. Accordingly, Scotty has rigged the engines to explode on contact with the barrier at the edge of the galaxy, when Kirk gives the order.
When the fateful moment comes, Kirk does not give the order.
This could be interpreted as weakness, perhaps. The other officers are ready to make the sacrifice of their lives and their ships.
But Captain Kirk does not ask for that sacrifice. Instead, he realizes that it is better to live to fight another day.  This strategic thinking is a key aspect of Kirk’s character, I would say.  Where some officers with more limited imagination would take the “safe” way out, and destroy the ship and crew, Kirk does not limit his thinking. He looks ahead to the possibilities, and the chance that additional time will give him a new option. He doesn’t play a zero sum game, but instead seeks…alternatives.
All the guest performances in this episode, from Stevens and Moss to Bouchet, hit exactly the right notes, and it is a pleasure to watch the Enterprise command crew get under the Kelvans' (thin) skins.  As for the series regular, in this case they manage some deft comedy without going overboard, or lurching into self-parody. The episode never becomes a lightweight comedy. Instead, "By Any Other Name" is a serious story with very real comedic moments and overtones.
I know “By Any Other Name” isn’t generally regarded as a great episode of the series, but I still feel it’s an immensely accomplished hour of Star Trek, for all the reasons I’ve listed.
at September 08, 2022