Star Trek Week: "What are Little Girls Made Of?"

Stardate 2712.4
The U.S.S Enterprise approaches the frozen world, Exo III, which was the last known location of Dr. Roger Korby (Michael Strong), a renowned scientist described as “The Pasteur of Archaeological Medicine.”
Aboard ship is Nurse Christine Chapel (Majel Roddenberry), Korby’s hopeful fiancée.
To the surprise of everyone, including Captain Kirk (William Shatner) and Mr. Spock (Leonard Nimoy), a signal from Korby is received. Miraculously, he has survived for five years on the inhospitable world.
Kirk and Chapel beam down to the planet surface and discover that Korby has discovered, in the planet’s deep caverns, the remains of an ancient Civilization -- “The Old Ones.”
Among other achievements, these highly-advanced (but now extinct…) beings could create perfect android duplicates of human beings. Even more impressively, they could transfer consciousness from human form to mechanical form.
Kirk is concerned, however, because Korby’s androids, including Ruk (Ted Cassidy) and the lovely Andrea (Sherry Jackson) have developed signs of independent will.
Korby creates an android duplicate of Kirk to assume command of the Enterprise, planning to take his discovery of androids out to the far reaches of the galaxy, beginning at a colony, Midas 5;  a world “abundant with raw materials.” 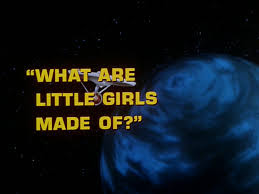 Penned by the great Robert Bloch (1917-1994) to feature strong H.P. Lovecraft overtones (particularly in the mention of the “Old Ones,”) “What are Little Girls Made Of” makes for an effective episode of Star Trek’s (1966-1969) first season.
Christine Chapel’s engagement to Dr. Korby provides the narrative’s emotional hook, and Ted Cassidy’s hulking Ruk supplies plenty of menace. Without exaggeration, Cassidy (1932-1979) is a huge man, and he dwarfs the other actors. He tosses William Shatner across various sets like a rag doll, and projects not just malevolence, but inhuman strength. 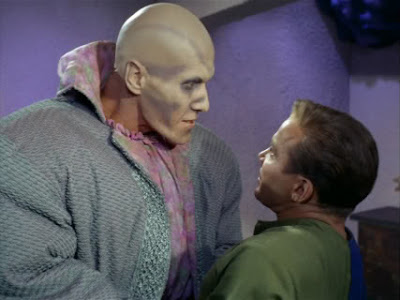 Meanwhile, Sherry Jackson’s Andrea proves both tragic and gorgeous
And our beloved captain displays his resourcefulness -- and thorough understanding of his first officer -- by dooming his android double with a subconscious racist message (“I’m sick of your half-breed interference, Mr. Spock.”) This is the only clue the intrepid half-Vulcan requires to understand that his captain is in danger. 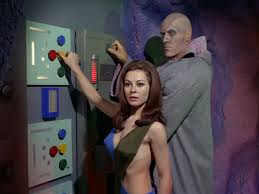 The quality that proves most compelling about this Star Trek episode, however -- especially in light of future “generations” -- is the anti-technology theme running through it.
Even though Korby has transferred his human consciousness into an android body, he is still depicted as being a slave to machine nature; to programming that makes him a “monster.”  The episode’s final point is that “something doesn’t survive the process” of transferring human consciousness to a machine.
Today, that idea seems antiquated and fearful, especially as man and machine grow closer than ever to an inevitable merging.
Hopefully we won’t become the Borg.
Star Trek: The Next Generation’s “Technology Unchained” idea is not yet in full effect here, clearly, and throughout the Original Series, one can detect a certain level of wariness and concern about new technology supplanting man.
In “Court Martial,” for example, a lawyer rails against the idea of computer testimony being utilized in a court case.
And in “The Ultimate Computer,” a thinking computer is seen as both a job killer and a competitor for superiority. Its Achille’s Heel is the fact that it lacks a human conscience and moral barometer
The same is true here.
No middle ground can be forged with Dr. Korby and his androids, though it would be beneficial, perhaps to do so.
Clearly, they can’t be allowed to assume control of a Federation Colony. But shouldn’t Federation scientists study the life-saving principles discovered by Korby’s party?  Andrea, Ruk, Brown and Korby, despite being androids, are still individuals. The episode successfully writes itself out of a nuanced solution by having all these individuals die by either attacking humans (and be phasered..) or committing suicide. The moral debate their existence raises seems to die with them, at least so far as this episode is concerned.
I’m firmly an Original Series fan in terms of my preferences, but this blog retrospective is about an objective look back at a 56 year classic. And objectively speaking, this is another arena in which Star Trek: The Next Generation is plainly superior in its commitment to and exploration of its creator’s humanist values.
There, in episodes such as “11001001,” “In Theory” and “Measure of a Man,” the android Data (Brent Spiner) explores his humanity and his rights. If he had been activated in Kirk’s time -- on Stardate 2712 or thereabouts -- he likely would have been met with suspicion and fear.
Next Gen episodes such as “Redemption” Part II display the fact that some Starfleet officers carry hostility towards artificial life into that 24th century era, but “What Are Little Girls Made Of” trades in outright paranoid possibilities; android duplicates infiltrating human populations and assuming control of them. There is no discussion of the idea that these machines have consciousness, and therefore the right to exist.
Kirk also talks about the idea that machines can’t feel love, tenderness, or sentiment here. Again, when one looks at Data, that’s a difficult argument to make. Data possesses a moral barometer (as we learn in the “Descent” two-parter), and a finely-developed sense of friendship. He is not a loveless, unsentimental monster bent on human conquest.
I think there’s an interesting comparison to be made between Trek generations and their views of technology. The original is conservative, viewing new developments as potentially dangerous, and demanding that humans remain (as they have been) in control of their technology.
The Next Generation is much more progressive, assuming a position of equal rights for all, and noting that whether biological or mechanical, we’re “all machines.”
In terms of production, “What are Little Girls Made Of” is a real triumph. The split-screen scenes in which the two Captain Kirks share a dinner table are flawless. 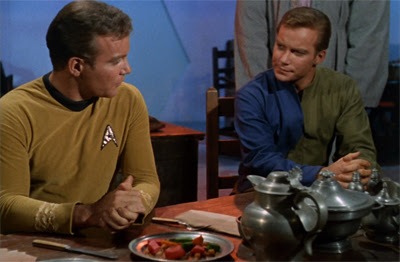 The android-making process is a little silly and fanciful, but unforgettable. What’s with the spinning table?  But I absolutely appreciate the horror overtones of the process. Basically, a life -- like a golem -- is created from a hunk of proto-form plastic or clay.  It lives, but it doesn’t possess a soul. 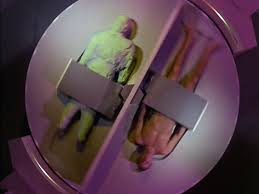 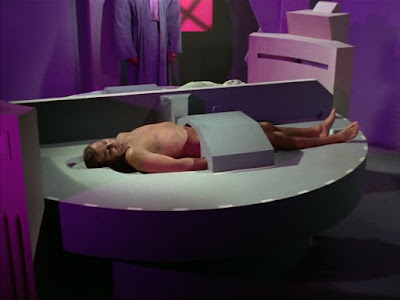 Or does it?
One area where the production falls down on the job: the hunk of cave ceiling Kirk pulls down and uses to protect himself from Ruk. I’m sure it is unintentional, but by golly it really does look like a giant phallus.
Was nobody paying attention?  How did this make it to air? 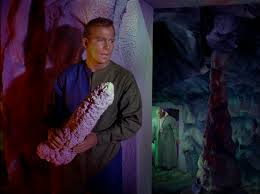 I have written before that the original Trek is incredibly kinky, yet I don't think that this prop was intentionally made to resemble a phallus.
In terms of deliberate kinkiness, "What Are Little Girls Made Of" has plenty to crow about, elsewhere. Andrea is, plainly, a mechanical "geisha," created to love and service Korby. Chapel pins him down on this "relationship." When he asks if she thinks he could love a machine, she replies "did you?"
That verb tense and word choice suggests sexual intercourse, rather than emotional attachment. The point is established. She's a pleasure-bot.
Finally, the supporting cast-members don't have much to do this week, but nonetheless, Nichelle Nichols again makes the most of her limited screen-time.
When Chapel learns that the love of her life is still alive, and that she will soon see him again, Uhura leaps up from her station on the bridge and hugs her friend. It's such a spontaneous gesture of love and support, and a testament to Uhura's humanity.  Strange New Worlds showcases both these characters, and I will be curious to see if it features a precursor to this moment of friendship and support.
at September 05, 2022