Stardate: 3715.3
Captain Kirk (William Shatner) and a large landing party beam down to Gamma Trianguli VI, an Earth-like planet that bears (favorable) comparison with the mythical Garden of Eden.
The planet proves anything but a paradise, however, as landing party team members die from such menaces as dart-firing flowers, explosive rocks, and, finally, lightning strikes.
Meanwhile, in orbit, the Enterprise is suddenly gripped by an unknown force, and Kirk threatens to fire Scotty (James Doohan) if he can’t find a way to reverse the ship’s orbital decay.
After Spock (Leonard Nimoy) detects a strange subterranean power field and structure nearby, Kirk and the landing party head to investigate it. They soon find a primitive tribe of humanoids, led by Akuta (Keith Andes) that serve a mysterious God called Vaal.
Vaal, the landing party learns, is a giant stone statue built into the side of a mountain. The natives “feed” Vaal by throwing the explosive rocks (a powerful source) into his vast maw.
Dr. McCoy (De Forest Kelley) is horrified to learn that the natives of the village know nothing of love or children, because of Vaal’s influence. Vaal cares for them and provides for them, but keeps them in a kind of developmentally arrested stasis.
Kirk decides to interfere, and destroy Vaal, realizing it is the only possible way to save the Enterprise. 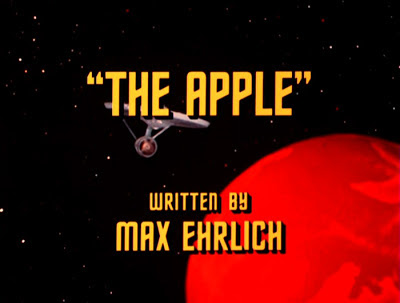 "The Apple” is probably not Star Trek’s (1966-1969) finest hour.
Once more, a story involves Kirk interfering with a primitive alien culture run by a computer (“Return of the Archons,” “A Taste of Armageddon,”) violating the Prime Directive, and substituting his personal morality and wisdom for that of another culture’s.
The story is all-too familiar, and ends with a virtual repeat of the conclusion of “Who Mourns for Adonais.”
There, Apollo’s temple was destroyed by phasers, and his threat to the Enterprise is terminated. Here, Vaal, the Stone God, gets the same phaser treatment. 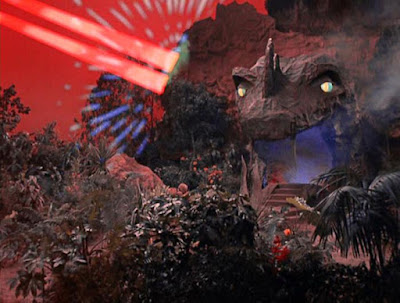 Before I delve into the episode’s moral implications, I should note that “The Apple” is poorly paced, and oddly structured too.
The first act is largely devoted to the planet's (and Vaal's) attempt to eradicate Starfleet red-shirts.  One after the other, hapless security personnel get killed, and Kirk wrings his hands, blaming himself.  These trained men get killed by flowers, step on exploding rocks, and are even targeted by lightning. 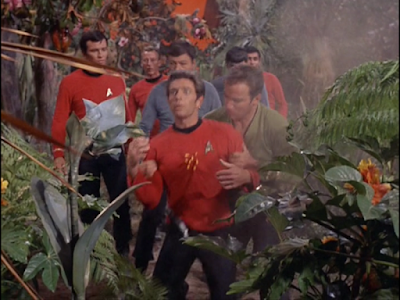 Since we don’t get to know the red-shirts before their bizarre demises, these deaths don’t seem to carry all that much meaning and are, again, forgotten by the time of humorous finale in which Kirk compares Spock to Satan.
All's well that ends well, I guess.
Now, in terms of Kirk’s decision to interfere in matters on Gamma Trianguli VI, I submit that he makes a very wrong one in “The Apple.”
Vaal provides the natives with virtual immortality. They live in peace, and, let’s face it, they do even have a job of sorts (the dinner bell rings regularly, apparently…). But they face no disease or strife, and do not even know what the word “kill” means.
They are innocent, and Vaal preserves their innocence. 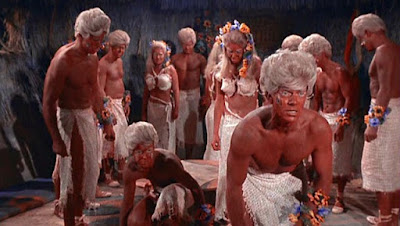 Is this different from how we choose to live?
Of course it is, but who is to say that Earth’s way, or Starfleet’s way is any more valid for human beings than Vaal’s way is?
Bones only sees humans in thrall to a machine. By contrast, Spock sees a perfectly symbiotic system that has worked efficiently, and to everyone's benefit, for tens of thousands of years.
Tell me, please, what organization, ideology or government on Earth has maintained peace and stability for that length of time?
Look, I may actively disagree with the way of life on Gamma Trianguli VI because it is not my way.
But I hope I have the wisdom to realize that not everyone must live by my choices.  Being free means the freedom to make your own choices, and your own mistakes.  Whether Kirk's judgment is right or wrong, he takes that decision away from this planet.
And he is particularly glib at the end of "The Apple," noting that if the natives keep going the way they are, they’ll know all about children soon enough.
Yes, indeed captain, and some women may die in childbirth, since these people have absolutely no experience with medicine, health care, or even child-birthing.
Essentially, Kirk does act as the snake in the Garden of Eden in this story, ejecting Vaal’s people from paradise, but then -- amazingly -- leaving them on their own.
What’s the mitigating circumstance here?
Only that if Kirk doesn’t interfere, the Enterprise will be destroyed.
Yet as I have written before, starship captains in the Federation swear an oath not to disobey the Prime Directive, General Order One, even if it means the lives of their crew.
So, “the Enterprise will be destroyed” is not a valid excuse for Kirk’s actions here, and certainly not so in terms of Starfleet rules and regulations.
What remains remarkable about “The Apple” is that -- clearly -- the writers know that Kirk is on shaky ground, making a difficult call.
How can I assert this?
Just look at the debate between Spock and McCoy.  Spock raises all the points that I do in this review. He clearly possesses grave reservations about Kirk’s behavior, and decisions.  According to a Star Trek comic from DC, “Return of the Serpent,” Spock’s suspicions prove accurate.
When the Enterprise returns to the planet in 15 years, it has descended into factionalism and murder.  The people, after 20,000 years or so in paradise, were not prepared for the change Kirk forced on them.
Spock’s answer? Restore Vaal. Undo Kirk's actions in "The Apple."
I suppose I should be clear about this. I am sensitive to Kirk’s arguments about how men and women should love each other and bear children, and toil for a living, raising crops, or doing jobs.  Hey, that’s the life I proudly live as a husband and father, a writer and a teacher at a community college.  I support Kirk’s belief that his way -- my way -- is a good thing.
What I don’t support, however, is his right to select for Vaal’s people how they should live.
He could have asked them.
Before taking down Vaal, he could have told them, “This is how we live. This is why it is good.”  He could then tell them that, if they agree, he could help them build a life like that, but that they must do it free of Vaal’s stewardship.
Look at it this way: Should I walk over to my neighbor’s house, and tell him that he should drive a hybrid car?
Seeing that his gasoline car is dangerous, should I just destroy it, forcing a change upon him that he hasn’t contemplated?
In that scenario, my facts may be solid, but I still have no right to infringe upon or usurp somebody else’s decision-making process.  I could provide my neighbor the facts, and implore him to switch…but I shouldn’t torch his car without consulting him, right?
An in-universe example would involve Starfleet attacking Vulcan, so that all Vulcans agree to express emotions like humans do.
Again, humans could make the case for the efficacy of emotions and feelings.  But they have no right to force a change on a free people who don’t want that change.  To quote Star Trek VI, that's "...arrogant presumption."
I’ve talked about it before, but I find this “gunboat” diplomacy of some Star Trek episodes quite distasteful.
It says, essentially, agree with my way, or it’s the phaser banks for you.
All this information about "The Apple" established, there are some elements I love about this episode. 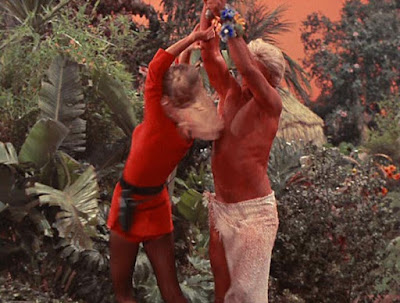 Yeoman Landon (Celeste Yarnall) kicks ass in terms of hand-to-hand fighting abilities.  I love that she can more-than-handle herself in a fight.  I have noted before the occasions when Star Trek feels "sixties sexist," and so it is only fair to note when the opposite is true.  Here, Landon holds her own in close-quarters combat with club-wielding villagers.
Also, I love the design of Vaal: the Serpent Mouth built into the side of a mountain.
I own a Mego toy of Vaal, and it is proudly displayed in my home office.. 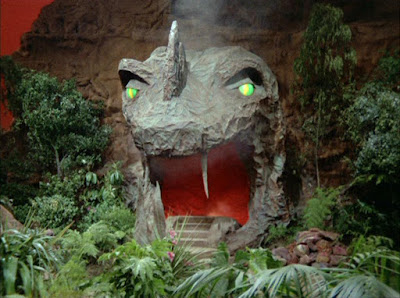