Star Trek Week: "For the World is Hollow and I Have Touched the Sky"

Stardate 5476.3
The Enterprise unexpectedly comes under attack from primitive missiles.  Curious about the origin of these weapons, Captain Kirk (William Shatner) orders the starship to backtrack the missiles to their point of origin: a large asteroid.
During the investigation, Kirk learns that Dr. McCoy (De Forest Kelley) is suffering from a terminal illness, xenopolycythemia. In one year’s time, the disease will take his life. Kirk undertakes the sad duty of requesting a replacement chief medical officer, even though Bones prefers that no one know what is going on with him, or his medical condition.
Kirk, Spock (Leonard Nimoy) and Bones beam down to the surface of the asteroid, and learn that it is actually hollow. It is a spaceship with a technologically-advanced interior. The world is known as Yonada, and the high priestess, Natira (Kate Woodville) is the people’s link to the planet’s custodian: the Oracle.
The men from the Enterprise learn that Yonada is on a collision course with Daran V, a planet inhabited by billions. They attempt to interfere with the Oracle's stewardship, in hopes of re-directing the asteroid from its dangerous course.
When they fail to do so, McCoy asks to remain and marry Natira. In the tradition of the people, he is outfitted with an “Instrument of Obedience” so that the Oracle can punish him when he breaks the law..
Soon, however, McCoy must risk the wrath of the Oracle to contact the Enterprise. He believes a special “Book of the People” may hold the key to re-orienting the asteroid from its collision course. 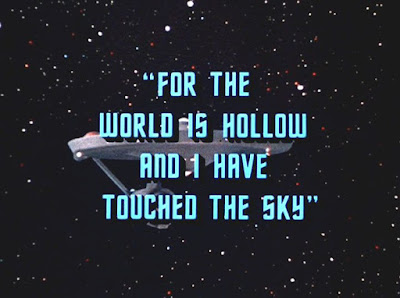 Despite its poetic title, “For the World is Hollow and I Have Touched the Sky” is not exactly lyrical.
On the contrary, the story-line is trite for two reasons.
First, the "society-controlled-by-a-computer" narrative has already been vetted on Star Trek. It has actually been done to death on the series, and done better (“Return of the Archons,” “A “Taste of Armageddon,” "The Apple.") 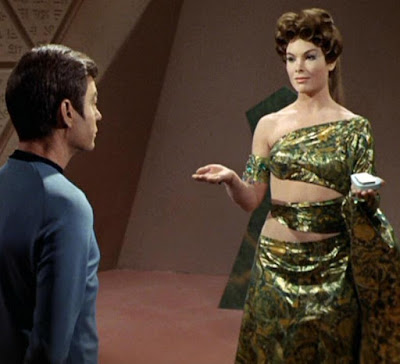 Secondly, the romance involving McCoy and Natira feels as forced as does McCoy’s subplot about acquiring, mysteriously, a terminal disease.  Natira hardly seems strong-willed enough for McCoy. She is not a bad person, but she has accepted the Oracle's dominion over her life, which seems like McCoy would -- or should -- have a problem with.
“For the World is Hollow and I Have Touched the Sky,” however, is not a bad episode in the same vein of “Spock’s Brain” or “And the Children Shall Lead,” and it does possess some beautiful, if small moments. Two immediately jump to mind.  One is visual.
I appreciate the shot for example, from between the rungs of a spiral staircase as the Enterprise landing party first descends into the hollow world of Yonada; its people gathering with curiosity.  This simple composition manages to capture the idea of a high-tech and claustrophobic subterranean world at the same time. The images suggests more than the low budget could possibly allow.  The viewer gets a sense of "being" there, in the subterranean world.
Secondly, I appreciate some of the episode's performances in the quieter moments, particularly in the sequence after Kirk has notified Spock about McCoy’s condition. McCoy awakens, weakened, after a battle with Yonada’s guards, and Spock is at his side, quiet and supportive, instantly. So much so that McCoy immediately and automatically senses that something is wrong; that Spock knows about his illness. Nimoy brings such quiet dignity to this moment. Spock loves McCoy, albeit in his Vulcan way, and that is plain from the performance.
Beyond such moments, I would state, without prejudice, that the episode never truly rises above its narrative contrivances. 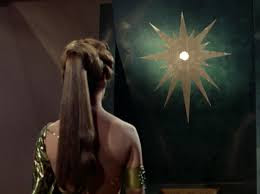 The first narrative contrivance is that McCoy would contract a terminal illness and fall in love, all in a relatively short span.
And then, of course, the adventure of the week just happens to be one that can lead to a (heretofore unknown) cure for his disease.
So does a (once-again healthy) Bones get his wedding to Natira annulled? Gene Roddenberry’s Star Trek: The Motion Picture (1979) novelization suggests that McCoy leaves Starfleet to live with the people of Yonada (descendants of the Fabrini). But there is no indication of that action here.
Also, I don't much care for the “falling instantly in love stories” that appear semi-regularly during Season Three.  Spock falls in love in “All Our Yesterdays,” Kirk does so in “The Paradise Syndrome” and “Requiem for Methuselah."  And even Scotty falls in love in “Lights of Zetar.”  Two of those love stories -- “The Paradise Syndrome” and “All Our Yesterdays” -- are outstanding episodes, but the others merely raise questions.
I would have much preferred to meet McCoy’s grown daughter, Joanna, for an episode, rather than witness this not-very-believable romance for the character. I guess the series wanted to do a McCoy episode, so he gets a romance tale and a dying-of-a-fatal-disease story wrapped up in one.
But think about how McCoy, as a real person, might think back about these events from a later perspective.  O
h yeah, that was the week I came down with a fatal disease, fell in love, got married, and then had my fatal diseased cured.
What a difference a day makes, right?
Beyond the awkward love story (and contrived disease narrative), “For the World is Hollow and I Have Touched the Sky” doesn’t do enough world-building for my taste. 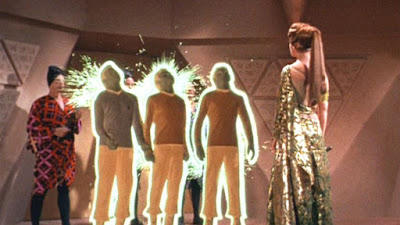 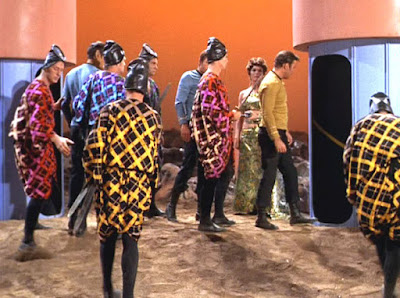 For instance, why must the people of Yonada be kept in the dark about the true nature of their planet?
This act of suppressing the truth transforms the Oracle from guardian or custodian, to repressive autocrat.  I suppose it is a comment on the perils of technology, a point we often return to in Star Trek, yet there is not much focus on this aspect of the story.  The Oracle is just another computer to have its plug pulled, because it is bad.  But there is no reason for it to be bad in this episode. Landru thought he was saving the people in "Return of the Archons," and the citizens of Eminiar VII obeyed their computers because they thought they were avoiding the terrors of war.  What good does the Oracle do, or what problem does he manage, by giving pain to his people when they learn the truth about their situation.
The Yonadans live in a repressive, overbearing culture, and yet there is no underlying reason for that repression to exist.  It would be manifestly better, given their destination, for the citizens of Yonada to be well-informed about the galaxy. The Oracle should understand that.
Also, I have trouble believing -- given the oppressive nature of the Oracle -- that Bones would just willingly let himself be implanted with the instrument of obedience. I know it is a requirement for marriage to Natira, but McCoy hails from a free, democratic society. Why would he -- an enlightened individual -- accept the dominion of the Oracle?  I know that people convert to their spouse's religion all the time, but said people don't usually have evidence that a deity is a liar, and oppressing the people.
I would simply restate here that I don’t feel that “For the World is Hollow and I Have Touched the Sky” is a terrible episode, merely a woefully average one.  The execution and performances are all fine, and yet the story is not very scintillating, or memorable.  And the tale raises too many questions of motivations, both on the part of McCoy and the Oracle.
at September 09, 2022