Stardate 5725.3
The Enterprise proceeds to Memory Alpha, the Federation’s new informative archive station in deep space.
Aboard the Enterprise is Lt. Mira Romaine (Jan Shutan), on her first space mission. Romaine’s job is to transfer information from the ship to Memory Alpha, but has also become involved in a love affair with Scotty (James Doohan).
On the way to Memory Alpha, the Enterprise encounters a strange storm that, when it strikes the ship, seems to impact different aspects of the humanoid brain. Mira takes the worst of the damage, and seems to start experiencing thoughts and ideas that are not her own.
The mysterious storm attacks Memory Alpha in the same way, destroying much of the archive.
Meanwhile, Mira seems increasingly to be possessed by the so-called storm.
In fact, the storm is a conglomeration of life-forms from the long-destroyed world of Zetar. When the planet was destroyed, some citizens survived, but as non-corporeal energy. They have sought, for generations, to find a new humanoid host where they can live out some semblance of a normal life.
The lights of Zetar believe Mira is the perfect host for such a purpose, but Captain Kirk (William Shatner), Scotty (James Doohan) and the others fight for her life and freedom, attempting to free Mira from her possession by using a pressure chamber in sick bay. 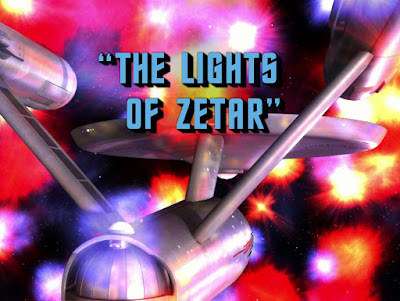 In a very strange way, “The Lights of Zetar” may be one of the most influential episodes of the original Star Trek (1966-1969).
Basically, this is one likely origin point of the (much-derided) “Mary Sue” fan story.  In fanzine tales of this type, a beautiful and highly-intelligent female (a surrogate for the fan writer) comes aboard the Enterprise, and falls in love with an established crew-member (Kirk, Spock, Bones, Scotty, etc.)
Those feelings of passion and respect are completely reciprocated, and the entire command staff basically obsesses on this “Mary Sue” (Mira Romaine) as some kind of alien experience occurs involving her.  She holds the key to communication, or resolving the conflict. 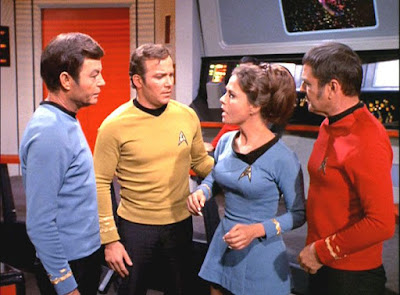 This “The Lights of Zetar” premise is a probable foundation for literally hundreds of fanzine stories from the 1970’s. It’s easy to understand why. The focal point, or lead character is a competent, young, attractive Starfleet officer. There is a strong fantasy or wish-fulfillment element (the love affair with an admired series character), both in terms of romance and narcissism.
Don’t you just know that you would fit right in with Kirk, Bones, Spock, and Scotty if they just met you and got a whiff of your beauty, wisdom, humor and intelligence?
So "The Lights of Zetar" launched a thousand fan fantasies.
In terms of the actual episode itself, “The Lights of Zetar” features a fine premise -- non-corporeal beings possessing humans -- but is less-than-satisfactory for a few key reasons.  First and foremost, Mira Romaine is lovely, but not very likable.
Several times in the episode, she is hostile to others, mainly Dr. McCoy.  I realize that Mira is a rookie getting her "space legs," but she does not seem to possess the temperament of a Starfleet officer holding the rank of lieutenant. She is unnecessarily attacking and harsh. (Okay, McCoy is this way too, temperamentally-speaking so perhaps I am setting a double standard. It’s okay for him to be irascible, but it isn’t okay for her?)
Perhaps we simply accept McCoy’s crankiness or sharp edges because he’s a regular character, and we get to see other sides of his persona. Mira Romaine, in “The Lights of Zetar” is vaulted to a position of incredible importance in this episode, but I don’t think she is conceived or performed in a way that is three dimensional or particularly appealing. 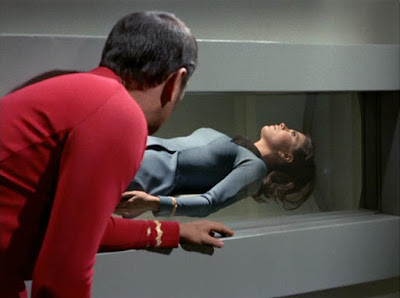 I don't believe it an exaggeration to write that Scotty and Mira have no chemistry whatsoever.
Scotty is paternal and doting, Mira is childish and clingy in return. There doesn’t seem to be a legitimate physical or intellectual attraction between the characters.  I deeply dislike Scotty “love stories” because they always seem out-of-character for the engineer. When he falls in love, Scotty stops being Scotty: a brilliant, high-strung, fast-talking technical genius. He becomes instead this adoring, blind puppy-dog person.
I don’t think the approach serves the character well, or fits well with what we know of Scotty. I see him falling in love with someone more like him: an excitable, mile-a-minute engineer.
I understand lust and sexual desire, but Doohan and Shutan don’t play that angle.
They don’t seem hot for each other in that way. It’s more like they’ve contracted an emotional disease called “love” which makes Scotty act out of character.
Also, too much of the episode sees the top crew obsessing paternally (and condescendingly) on Mira and her well being. Mira -- whatever her flaws, temperamentally -- is an independent woman, and not “the girl” everyone speaks of so condescendingly. 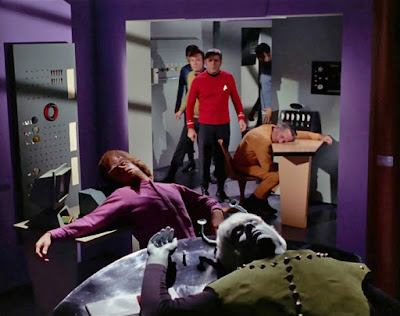 I also find it disturbing that the Memory Alpha situation is handed in such an off-handed manner.
Memory Alpha, like Mira Romaine herself, is never seen of or heard of again in the original series after this episode.
So, is the archive’s information recovered?
Is the devastating loss to the galaxy permanent?
The survival of the Federation’s greatest historical tool should be a primary focus of the episode.  But again, “The Lights of Zetar” is really the archetypal Mary Sue story. Everything comes down to our guest character, Mira, and her (unlikely but total) importance to the main crew.
Before she is shuffled off, and totally forgotten. By next week.
I dislike the focus here, but I can also see how this episode clearly resonated with fans, who went on to write a generation of variations on “The Lights of Zetar.” 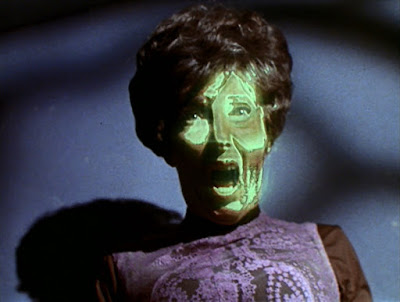 In terms of the alien threat, I find the corporate life form of Zetar fascinating.
Often in the series, Kirk argues passionately for the rights of the individual. The individual must choose for him or herself how to live, and not be impeded in that choice by overbearing religion (“Return of the Archons”), inhuman technology (“The Apple”) or even a misguided State (“A Taste of Armageddon,” “The Mark of Gideon.”)
Here, Kirk argues for Mira’s inalienable right to control her own body and mind. The Zetarians want to use her, possess her, and control her, but Mira must be free to choose how she wants to live. I wonder if the idea of a group of entities forcibly living as one inside an unwilling host is actually Cold War commentary on Communism, the idea of the state forcing its collective will upon individuals. 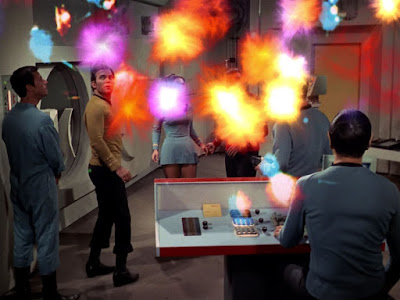 Kirk is absolutely right to send the Zetar survivors packing, given the forceful and unrepentant way they hijack Mira, but it is nonetheless a shame that some accord couldn’t be reached, wherein the knowledge, memories and consciousness of the Zetar people could survive in an artificial body (“Return to Tomorrow.”)
I don’t have any hate in my heart for “The Lights of Zetar,” and there are solid concepts at work in the episode. Yet overall, the episode feels less compelling than it should be, perhaps because the Scotty-Mira relationship is so lacking in energy and passion. It just seems wrong, and not true to the Scotty we know and love.
at September 09, 2022