1807 Days after Leaving Earth Orbit
With Maya (Catherine Schell) feverish and sick, and Commander Koenig (Martin Landau) and Tony Verdeschi (Tony Anholt) off-base investigating a derelict ship, the moon is unexpectedly plunged through a space warp.
In just a matter of seconds, it travels five years through space, stranding the commander and security chief, with little or no hope of returning home.
On Alpha, Alan Carter (Nick Tate) is in command, and sends out a re-fueling Eagle, in case, by some slim-chance, Koenig’s eagle can find the same window in the space warp that Alpha fell through.
But Carter has other problems to contend with when a delusional, hallucinating Maya breaks free of restraints in Medical Center, and begins to transform into alien monsters (as well as Mentor). Desperate to return to Psychon, the feverish Maya wreaks havoc on Moonbase Alpha.
In faraway space, Koenig and Tony access the logs of the derelict crew, and learn that the vessel became lost from its mother-ship when it went through a space warp. The captain, Duro, and his crew, were working on finding the same window in the warp with a space warp locater, when they died.
Now, Koenig and Tony must use the space warp locator -- and the derelict -- to get home to Alpha, while Alan and Dr. Russell (Barbara Bain), armed with tranquilizer darts, must bring down Maya, both for her safety, and the safety of all of Alpha. 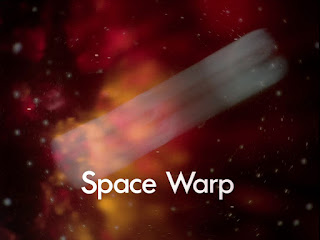 Two stories go to war in “Space Warp,” an episode of Space: 1999 Year Two written by Fred Freiberger (as Charles Woodgrove).
“Space Warp” features much promise -- and at least one brilliant special effects sequence -- but is badly hampered by a slapdash production, and poor execution.
The fascinating aspect of this tale involves Commander Koenig and Tony’s discovery of the alien derelict, and all its mysteries.
The alien captain is fascinating in appearance, wearing a very strange helmet that reminded me of Japanese anime, for some reason.
We learn Duro’s story, and his failed attempt to get back to his people, and it’s both a tragic story and a history that we worry could be repeated with Koenig and Verdeschi.  ''
The design of the alien vessel is amazing, too, and this story generates real excitement and interest. As is often the case, Space: 1999 is able, with a few imaginative touches, to suggest a whole alien race that feels…well…alien. 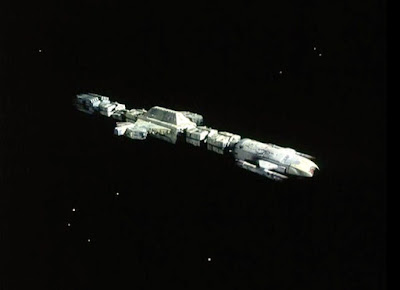 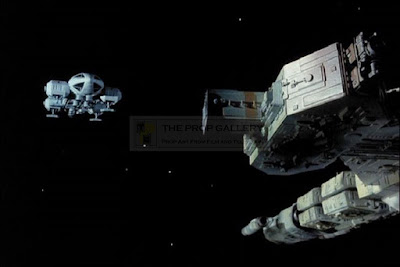 This fascinating story of a marooned ship, wrecked on the lip of a space warp, essentially, is balanced out, however, with a pure time-waster "B" story, as a sick Maya “loses molecular control” and transforms into one silly-looking and indestructible alien after another.
Maya’s best moment in the show comes before the transformation storm, as she warns Helena that nightmares are taking her over, and that she must be put into restraints. Catherine Schell acts this dramatic scene with urgency, and with a deeply-vested concern for Maya’s friends on Alpha.
Once she’s gone, it’s all just mindless action, however. 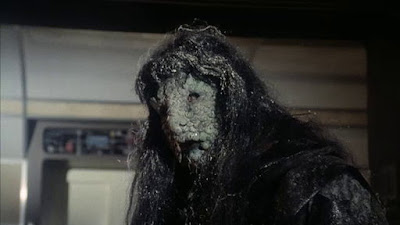 What is clearly missing, to contextualize the action, is the connective tissue to Koenig’s story.
Early on, Helena wonders if Maya’s fever is related to the appearance/proximity of the space warp. The idea is dropped however, so that the connection is tenuous at best. It would have been better, for instance, to learn that Psychon psychology is damaged or impacted by close proximity to space warps. This would make Maya a living early-warning system of sorts, for when Alpha encounters them.
Instead, the two stories trot on, mostly with no real connection to one another.
The episode’s visual highlight, however, comes in Maya’s story.
In attempting to return to Psychon, Maya -- in alien form -- attempts to launch an Eagle while it is still in an underground hangar bay. The ensuing special effects are feature film quality (for 1977), as the Eagle attempts lift-off, then crashes, and fire breaks out. The moment is nothing less than spectacular. Not only do we get to visit a seldom-seen area of Alpha (and a peek at the docked Eagle fleet), but we get a special effects, pyrotechnic showcase as well. 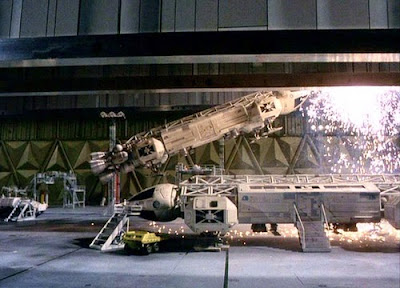 Alas, other than this amazing hangar sequence, “Space Warp” feels really slipshod.
Two points on this:
Point One: Koenig and Tony require the MacGuffin of the week -- the space warp locator -- to get home. They search for it, finally find it, and hook it up, hoping they can make it compatible with their ship’s computer.  It’s thus an important aspect of the episode.
But it is visualized as a futuristic microscope, essentially, and is a familiar prop on the series, not something that looks alien, or even different from Alpha technology. In fact, the “space warp locator” shows up as a sensing/viewing device in episodes such as “Devil’s Planet.”
It’s a huge disappointment that a familiar prop was just picked up, spray painted silver and made to function as one of the most important elements of this storyline. 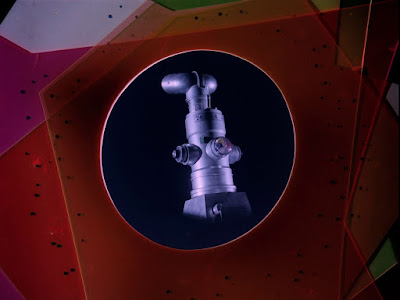 Point Two: In the episode-long run-around featuring Helena and Alan chasing Maya-monsters, Carter’s space suit visor flips up for a time, exposing him to the vacuum of space on the lunar surface.
This is a scene/stunt that should have been re-shot, as it is not part of the intended action. Instead, it is an unintentional gaffe that is left in the final cut, and is, well, embarrassing. Space suits shouldn't be this flimsy, lest they cause instant death for the wearer.
I realize and understand that Year Two of Space: 1999 was a pressure cooker, with the main cast often divided, shooting different episodes at the same time, but in instances like these I've noted above, the series desperately needed someone to keep an eye on quality, so that the final result would not seem so slapdash or haphazard. There was not a clear enough eye on detail.
“Space Warp” is action packed, with some good moments on the derelict, and in Alpha’s hangar bay. But most of the time, fight scenes and mindless action substitute for science fiction, and that’s a shame.
It’s not all a loss, however. 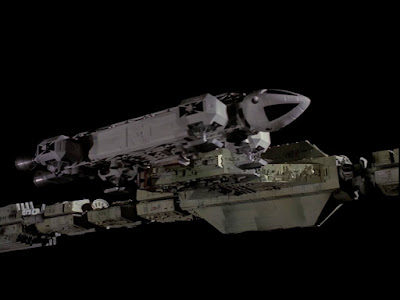 I do appreciate the fact that at the end of "Space Warp," the Alphans have a derelict spaceship in their hands to examine, cannibalize, and replenish resources from.
This is an idea that is necessary to maintain verisimilitude on a "lost in space"-styled series, and I’m glad to see it featured at the end of the episode.
at September 14, 2022