Stardate: 3287.2
Following a trail of “mass insanity” across a quadrant of the galaxy, the U.S.S. Enterprise arrives at a colony of million people at Deneva.
On approach to the planet, the Enterprise attempts to intercept a small Denevan craft heading directly in the sun, but fails.
Before the pilot dies, he exclaims that he is “free.”
Captain Kirk (William Shatner) is particularly concerned because his brother Sam (William Shatner), wife Aurelan (Joan Swift) and son Peter (Craig Hundlrey) all live on Deneva.  Upon beaming down, Kirk finds his brother dead, and his sister-in-law and nephew suffering -- like all Denevan colonists -- from terrible pain.
The people of the planet are all playing host to strange alien parasites, which use humanoid bodies as arms and legs. During one visit to the planet, Mr. Spock (Leonard Nimoy) is attacked by one such parasite, and must fight to maintain control of himself.  Spock soon learns that each parasite is like a “cell” in a larger organism that operates as a hive mind.
Realizing that he cannot permit the mass insanity “plague” to spread to any further planets, Kirk contemplates destroying Deneva, and one million human lives.  He desperately seeks an alternative, even though McCoy (De Forest Kelley) and Spock cannot figure out a way to save the denizens of Deneva… 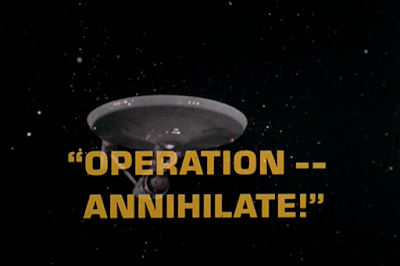 Star Trek meets Robert Heinlein’s The Puppet Masters in “Operation: Annihilate!” the final episode of Trek’s stellar first season. That literary work was published in Galaxy Science Fiction in 1951, and was also the subject of a 1994 cinematic adaptation directed by Stuart Orme.
Heinlein’s classic story concerns an alien hive mind. The book’s parasitic aliens, like “puppets pulling strings” could override the nervous systems of human hosts. These parasites are described in the text as mostly brain tissue, but possessing a stinger.
In the book, they began to infiltrate Earth governments, rapidly taking over from humans.  And, after awhile they even developed a taste for sex.
Many critics have seen the notion of aliens infiltrating the American government as a metaphor for the Cold War Era, and the alleged infiltration of the U.S. by communist agents. It’s a paranoid, McCarthy-ite scenario, but one that has also been fodder for much cult-television.
An outstanding and creepy episode of The Outer Limits (1963-1965), “The Invisibles,” for example, features a similar narrative.
“Operation: Annihilate!” features very alien parasites too (and unique ones designed by Wah Chang, at that…) but ones that seem bent not only planetary, but galactic conquest.
In some senses, the story of parasites controlling human hosts also forecasts an episode of Star Trek: The Next Generation’s (1987-1994) first season: “Conspiracy.”
“Operation: Annihilate” is not generally named as one of the best or most memorable of Star Trek episodes, and yet I admire it very much, and consider it an excellent installment.
For example, I  enjoy the location shooting (at TRW Space and Defense Park and UCLA), and feel that the wide establishing shots and high-angle shots  prevalent in the installment’s first act grant the episode a necessary sense of scope (and menace too….), especially since the budget can afford to show but precious few of Deneva’s million inhabitants. 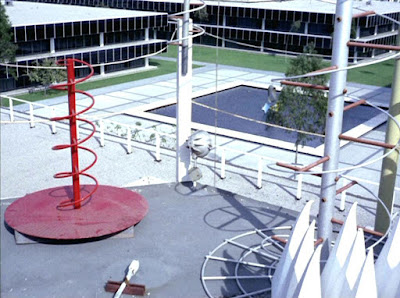 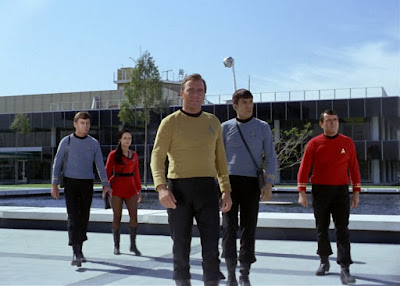 More impressively, the episode boasts a fine understanding of each member of the heroic triangle (Kirk-Spock-McCoy).
Consider: each character in the triumvirate in this episode must grapple, quite literally in some cases, with crippling pain, and yet maintain the ability to continue functioning.  On a literal level, “Operation Annihilate” concerns the way that aliens control humans by pressuring them with physical agony; physical pain. But “Operation: Annihilate!” also concerns the ways that the Enterprise command crew deals with its pain, and manages to control it.
Not all pain is caused by outside agents.
Kirk must grapple with a kind of familial or personal pain relating to the death of his brother, Sam, for instance.  And that’s not all.  He must also contend with the very real possibility that he will have to commit genocide to save the galaxy. 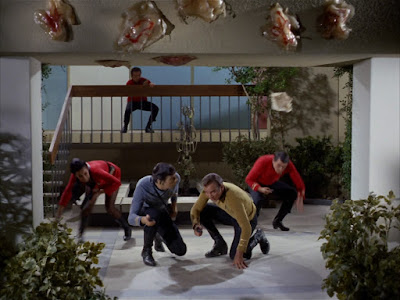 Knowing Kirk’s history with Kodos the Executioner, this is a doubly affecting crisis. That governor (Kodos) had to kill half the colonists on Tarsus IV because of famine in order to save the other half. Now Kirk is placed in a situation wherein he is faced with a similar decision, but on a much larger scale.  He would have to murder a million to save billions.
I generally dislike lines like Kirk’s, here, when he says he is faced with his “most difficult” command decision of his life. Usually, that line would read to me as melodramatic. In this case, however, given Kirk’s loss of his brother, and his impending decision regarding a million human lives, I think it is entirely warranted, and earned, dramatically.
Spock’s resolve is also tested in very dramatic terms here. Spock loses emotional control to the alien “puppet master” attacking him, at least until he realizes that pain is a feeling…and that he can control his feelings. 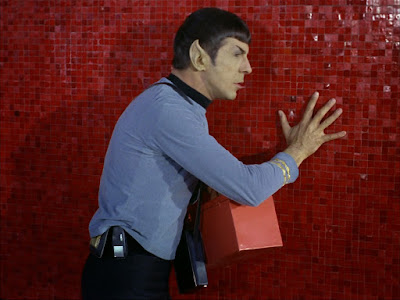 Time and time again in Star Trek, we see Mr. Spock place “mind over matter” to retain his iron-control over his senses, and this episode does a great job of showcasing the fact that Mr. Spock is suffering grievously, yet exercising control.  Like Kirk, he doesn’t have the privilege or freedom to just surrender.  If he does, not only will their mission fail, he will lose his very identity to the intruder.
Finally, Bones gets a great role here as well, and another one associated with pain. Because he doesn’t wait for a test to return, McCoy ends up blinding Spock while attempting to find out what kind of light kills the parasite. 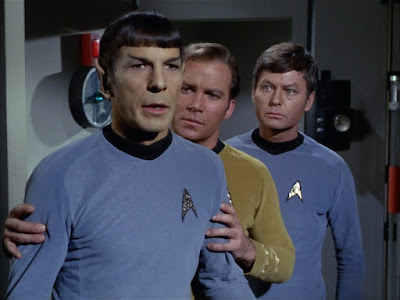 Afterwards, he feels incredible guilt for his decision, and Kirk doesn’t help with his temperamental comments. Later, Kirk tells him that it wasn’t his fault, but -- unlike Spock -- you can see the pain all over McCoy’s face.  But McCoy continues to function too.
So there’s a juxtaposition here between the aliens who “enforce” pain from the outside, and Kirk, Spock and McCoy, who grapple with internal pain, some of it brought on by emotions of personal loss, loss of individual control/discipline, and finally, guilt.
We don’t need an alien cell on our backs to be incapacitated by pain, the episode implies, and yet -- monster or no -- we must go on; we must make it through in spite of the pain
To Star Trek lore, “Operation: Annihilate!” contributes our first and last look at Sam Kirk (mentioned in passing in “What are Little Girls Made Of,”) and makes notice of the Vulcan inner eyelid, a physiological curiosity which protects the species from the glaring sunlight of their desert world.
The 1970s series Man from Atlantis (1977) featured an episode, intriguingly, during which Atlantean Mark Harris (Patrick Duffy) revealed that he too possessed a secondary or inner eye lid.
A satisfying and dramatic hour, “Operation: Annihilate!” is notable too, perhaps for a too-quick wrap-up. One thing fans might like to know is what becomes of Peter Kirk, Captain Kirk’s nephew.  He is never seen or heard from again in official series lore, which seems an oversight.  At the very last, he needs a final scene with his uncle, Jim Kirk.  That scene was apparently shot, but deleted before airing. 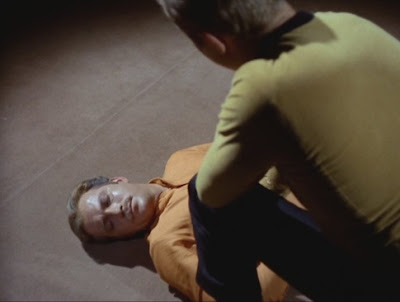 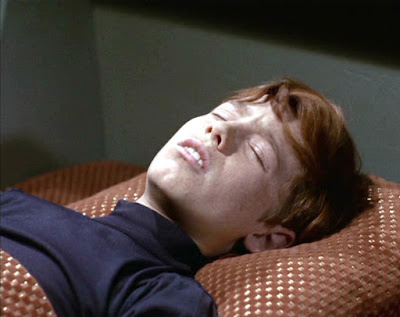 That’s a minor complaint, however, about “Operation: Annihilate,” another Trek story that showcases a memorable alien, and uses that alien to help us understand the series protagonists as never before.
at September 06, 2022