Stardate 3219.8
Captain Kirk (William Shatner), Mr. Spock (Leonard Nimoy) and Dr. McCoy (DeForest Kelley) transport Federation high commissioner Nancy Hedford (Elinor Donohue) aboard a shuttle craft when a strange space cloud intercepts them.
The shuttle is diverted to a distant planetoid, Gamma Canaris N, and its systems are rendered inoperative.
This is particularly disturbing because Hedford is dying of Sakuro’s Disease. And on top of that, she is needed to stop a war at Epsilon Canaris III.
Very soon, Kirk and the others learn the reason behind their abduction and marooning.  The space cloud that captured them -- “The Companion” -- has been caring for a castaway, Zefram Cochrane (Glenn Corbett) for 150 years.
Fearing he would die of loneliness, she brought the shuttle and its occupants to him.
In an attempt to save Hedford before it is too late, Kirk and the others attempt to communicate with the Companion using the universal translator. They soon learn that the cloud loves Cochrane.
Not as a pet, but romantically.
At first, Cochrane is horrified that something so “alien” could have “human” feelings for him, but soon he begins to understand how much the Companion means to him. 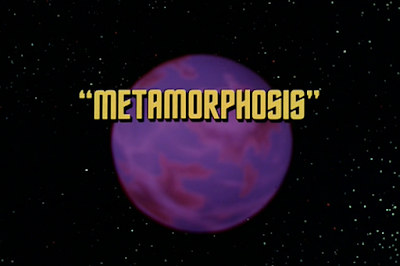 “Metamorphosis,” by Gene Coon is one of my favorite second season Star Trek (1966-1969) stories, because it concerns nothing less than the universal nature of love.
That doesn’t mean the episode is perfect, or has aged well, however.
Many viewers today “read” the story as extremely sexist for its two-dimensional treatment of the Nancy Hedford character.  She is a cold “professional” woman who has never been loved, and -- let’s face it -- she is not very pleasant.
In short, Hedford is a stereotypical 1960s professional woman, as imagined by a man of the time.
I understand and sympathize with this point-of-view (that the show is sexist).
Furthermore, Kirk’s final line of the episode -- “I’m sure the Federation can find another woman, somewhere, who will stop that war” -- seems unnecessarily glib, if not downright condescending.
However, there are some opposing points to consider in defense of “Metamorphosis.”
First, one should note that even though she is characterized as a cold, love-less, grating person, Hedford is simultaneously depicted as an accomplished, high-ranking individual. She is sought by the Federation as the best in her field, to stop a war.  This is unequivocally a positive statement about the role of women in the 23rd century.
Of course, Kirk’s final line undercuts this accomplishment a bit. It suggests that the Federation can just find some other woman to do it, like it has a farm of female diplomats on standby for just such an occasion.
However, as I have pointed out before, in other episode reviews, Star Trek also has a (bad) habit of making any higher-up in the Federation a total jerk, creating a kind of Enterprise-against-the-universe dynamic.  This dynamic recurs throughout the series.  Obnoxious, cold, uptight male diplomats have been featured in episodes such as “The Galileo 7” and also “A Taste of Armageddon.”
Thus, in a weird way, Hedford is treated quite “equally” by the writers of the series, at least in a sense. She is every bit the arrogant diplomat as are her male counterparts.
So the series doesn’t hate or demean women. It hates or demeans diplomats.
On a more important basis, however, “Metamorphosis” offers a very beautiful statement about love. Specifically, the episode suggests that love is something that can exist independent of social norms.
It says that love is not limited to that which is accepted, or familiar.  Love can take any form, and can transcend limited, parochial definitions.  The heart wants what it wants, and matters of gender, race or biology do not necessarily change it.
The Companion -- an energy being, essentially -- loves Cochrane.  She does so in a completely self-less, caring fashion.
The Companion loves him to such a degree, in fact, that she is willing to see her existence end, so that he might live.  The Companion thus understands sacrifice. Immortality is something that humanity has sought since it was first born, and yet the Companion gives it up without a second look so that Cochrane may continue to exist.
The most beautiful image (in an already beautiful) episode finds the Companion, in Nancy’s body, gazing at Zefram through a scarf that, with its transparent fabric pattern, visually mimics the former color shadings of the being. 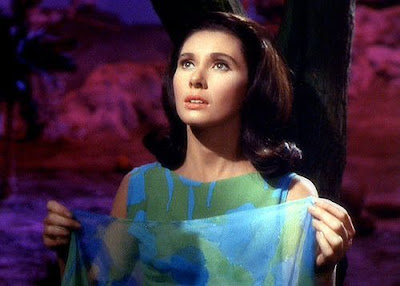 In other words, The Companion looks -- one last time -- through the eyes of her immortality, at the man she has given up everything for. There’s a wistful acceptance in this moment, not to mention genuine visual poetry.  The Companion is aware of what she has given up, but stands by her decision.
Kirk, Spock, and Bones almost immediately understand the situation on the planet, involving Zefram and the Companion, but Cochrane does not. Instead, he expresses horror and revulsion hat some form that he doesn’t find attractive might be in love with him.
What we see then, is some 23rd century equivalent of racism or homophobia.  As Spock observes, it is a completely “parochial” attitude that Cochrane reflects.  His viewpoint is narrow, limited by his experiences.  He can’t conceive that love might not happen as he imagined it, or with whom he chooses. 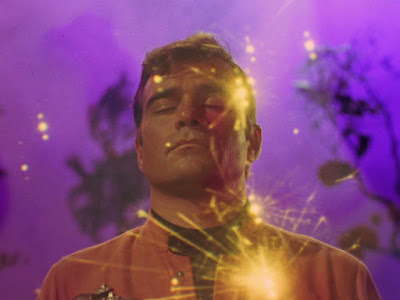 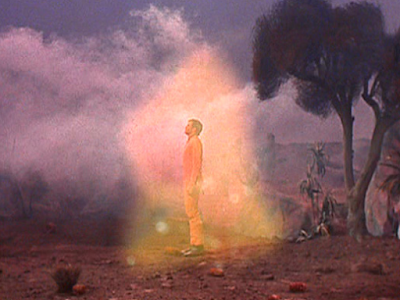 It takes him some time to realize that the Companion is not a monster for loving him, but a living creature with emotions, just like him.  I love that the episode allows Cochrane to start from this viewpoint of fear and intolerance, and then overcome it, or at least begin to overcome it.  We are imperfect creatures, and sometimes it takes us time to understand the world, and the beings around us.
The message, then, is that we all experience love, and deserve love, and that sometimes love sometimes does not take the form we expect, or that society recognizes as valid  That’s a hugely powerful message for 1967, and yet there can be little doubt that “Metamorphosis” expresses these concepts beautifully.
It is a romantic and beautiful story, even if Zefram only comes to fully accept the Companion in human form.  He grows too, even if he does not have to grow and “change” as deeply as does the Companion.
Indeed, one might ask, what is the metamorphosis of the title, here?
Is it the Companion, who already loved, inhabiting the body of a human woman for the first time? 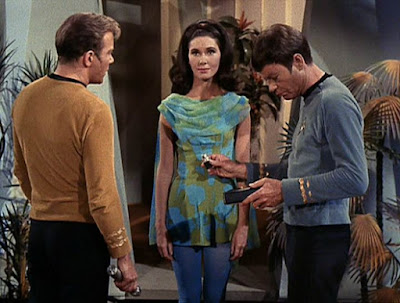 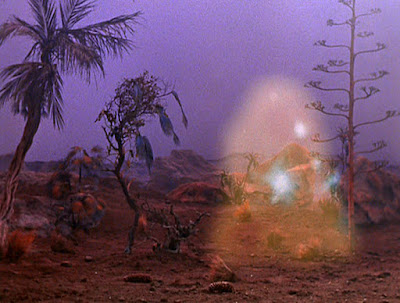 Or does the metamorphosis of the title involves Zefram’s heart? He goes from fear, paranoia and revulsion to loving and accepting.  And he too sacrifices for the Companion.  He has learned from her. Specifically, he chooses to remain on the asteroid with the Companion, rather than return to a galaxy waiting to celebrate his return.
I also love the episode’s final recognition that “growing old together” is one of the more pleasant things that can happen to human couples.
I feel, absolutely, that statement is true.
“Metamorphosis” is imperfect, I suppose. It depicts Hedford in a way that many see as sexist, and though it knows enough to imagine how love can exist between different forms, it still assigns those forms heterosexual identities. It still thinks very much in terms of man/woman, even if it is human man/alien woman.
Still, I stand by my belief that for 1967, “Metamorphosis” is extremely forward thinking, and tolerant.  It sets the groundwork for the franchise’s deeper forays into this kind of material (see: “The Outcast.”)   You have to crawl before you can walk, right?
In terms of the franchise, “Metamorphosis” introduces a character who has become very important, historically speaking: Zefram Cochrane, the inventor of the warp drive.
He is described in “Metamorphosis” as being Zefram Cochrane of “Alpha Centauri.”  I suppose that means he could have moved to “Alpha Centauri,” because Star Trek: First Contact (1996) identifies him as an Earthman, but still the inventor of the warp drive, as he is here.
However, in First Contact, Zefram looks quite different, and acts quit differently, than he does in this story.  And I guess that creates a minor discontinuity of sorts.
at September 07, 2022