Stardate: 3211.7
While preparing to transport down to Gamma II to inspect equipment there, Captain Kirk (William Shatner), Lt. Uhura (Nichelle Nichols), and Mr. Chekov (Walter Koenig) are unexpectedly whisked to the distant world of Triskelion.
There, they are trained as gladiators by Master Thrall Galt (Joseph Ruskin).
After such training, they will spar at the pleasure of their new masters, the unseen Providers.  Kirk is also trained by Shahna (Angelique Pettyjohn), a beautiful green-haired human who has never known anything but slavery and servitude.
Kirk soon learns that the Providers are actually disembodied brains who like to gamble on the results of the gladiatorial contests.
He proposes a risky gamble: his life -- and the lives of the Enterprise crew -- if he loses in combat.
But if Kirk wins his gladiator match, the Providers will free all the thralls from captivity and train them to be self-governing. 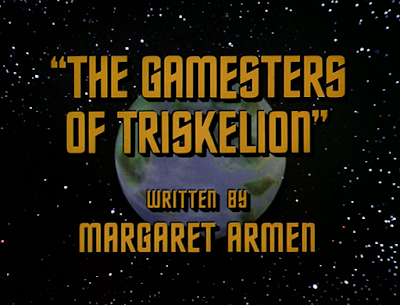 “The Gamesters of Triskelion,” by Margaret Armen features colorful aliens, colorful fight scenes, and even colorful alien brains too.
It is one of those perfectly entertaining Star Trek episodes that adroitly mixes action with romance, philosophy, and didactic morality (the concept that slavery is wrong, and evil).
Here, Kirk essentially plays Spartacus to lead a slave revolt on a distant planet.
Like some other episodes of the original series, “The Gamesters of Triskelion” is “perfectly entertaining” without being particularly creative, or innovative. In short, nothing really new or surprising happens in the story, except that Lt. Uhura is nearly raped by her drill thrall, and Kirk, in protest, mispronounces her name. 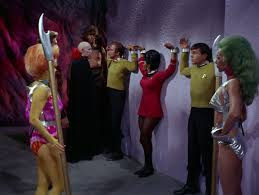 But seriously, below a surface level, this is a story of clichés we have seen many, many times on Star Trek before (and will see again).
There are a number of “fighting” or gladiator episodes in the canon, actually, from Pike’s Rigel fantasy in “The Menagerei,” to the more central personal combats of “Arena,” “Amok Time” and “Bread and Circuses.”
Another example of creative idling: the “B” story here is totally predictable.  From the Enterprise’s bridge, Mr. Spock attempts to locate his missing captain while Dr. McCoy (and even Mr. Scotty) snipe at him to work faster, or give up, or admit he was wrong, whathaveyou.
The odds of finding Kirk are not good, yet find the captain Spock does.
He always does.
And McCoy always second-guesses him.
In this case, their banter and bickering is just there to eat up time. Certainly, McCoy would know Spock well enough by this time not to press him so hard, especially with Jim's life at stake.
Meanwhile, Kirk has a planet-bound romance with a beautiful alien woman, and teaches her the meaning and value of such words as “love” and “kiss.”  Then, he out-talks aliens, takes a big risk (the lives of his crew for the freedom of the thralls), and wins big too.
In other words, he is lover, a fighter, a leader and cocky as hell. 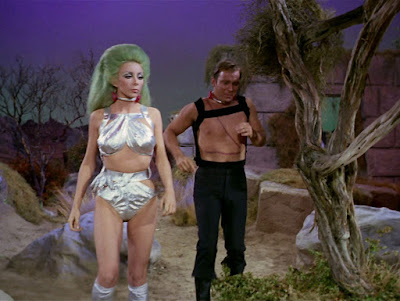 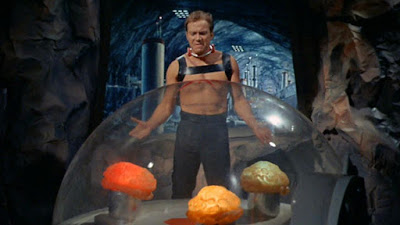 By this point, it all seems rather....mechanical. "The Gamesters of Triskelion" is a smooth running machine, but mechanical in concept and execution nonetheless. The episode succeeds in part, I would suggest, because it has a comforting feeling of Star Trek-kiness because of the sheer number of series clichés reshuffled.
And it is entertaining.  I enjoyed seeing it again.
But deep analysis is not warranted.
If one looks too deep, Kirk seems reckless for risking his crew.  What if he tripped and broke a leg during combat? He'd be delivering 431 people into a life of slavery (and maybe even generation of slavery).
If one looks too deep, Kirk seems cruel, too, for so clearly manipulating Shahna.  He makes her think he loves her.  He may have affection for her, but she is never as important to him as returning to the Enterprise is.  Her freedom and his desire to escape just happen to coincide for a time. 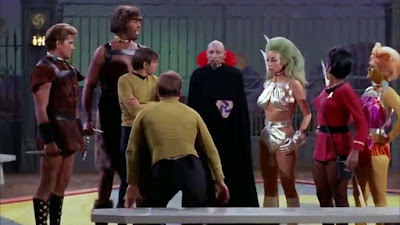 So I suppose it’s my opinion that one shouldn’t look too deeply at this episode's implications, and enjoy it simply as a really colorful “adventure.’
Like many episodes of the original Trek, “The Gamesters of Triskelion” is a pop-culture touchstone, and has been referenced on The Simpsons and South Park among other programs.  It is remembered by so many, I propose, not because it is great, but because, as I've noted, it regurgitates so many key “parts” of the original series and therefore feels emblematic of the series "vibe" or "aura."
Really, the series is a lot “brainier” than this particular episode suggests.
at September 07, 2022