Stardate 5793.2
In response to the disappearance of the U.S.S. Defiant, the Enterprise moves into a dangerous region of space to locate it.  There, in a period of “interphase,” two universes overlap.  The Defiant is disappearing into that mysterious universe, and Captain Kirk (William Shatner) -- who becomes trapped on the ship -- is doing so as well.
The area of interphase also causes madness and violence in humans aboard starships, and it begins to have a dangerous influence on the Enterprise crew, as Mr. Spock (Leonard Nimoy) takes command, and attempts to rescue the missing Kirk.
Making matters worse, the territorial Tholians arrive, and claim this turbulent region of space for the Tholian Assembly. Commander Loskene threatens the Enterprise, but Spock knows the Enterprise cannot leave the area without risking the loss of Captain Kirk.
In response, the Tholians begin to create a space web to trap the Enterprise.
Spock and Dr. McCoy (De Forest Kelley) bicker over the situation, until they watch Captain Kirk’s last recorded orders, and begin working together -- and racing against time -- to escape the Tholians, save the Enterprise, and rescue their captain. 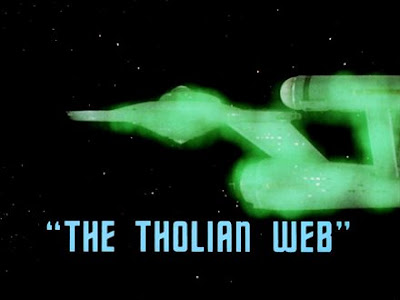 “The Tholian Web” is, without a doubt, one of the best episodes of Star Trek (1966-1969) from its third season.
The episode is worthwhile for a number of reasons, but in the final analysis it is succeeds as a wonderful exploration of the central “triumvirate” (Kirk-Spock-McCoy), and the events that happen when one person is subtracted from that close-knit triangle.
Here, McCoy and Spock bicker through their grief, since Kirk may be dead, and eye each other suspiciously. It is clear that without Kirk's presence to temper their extreme viewpoints, these two points on the triangle teeter on the edge of outright warfare.
McCoy states that he would like to “remedy” the situation, removing Spock from command, for example.  The interaction between these characters is not playful. It’s not gentle. It is not tempered by feelings of affection.
Rather, McCoy and Spock are clearly at each other’s throats throughout the action here.  The logical conclusion is that what binds them together is their friendship and support for Captain Kirk, not necessarily their regard (or respect) for each other.
Kirk’s last orders (well-played by Shatner) get these two men, these two Starfleet officers, back on track. Kirk’s tape refocuses Bones and Spock away from their struggle, and back to the one thing that matters more than anything else to Kirk: the safety of the Enterprise.
This seems a crucial episode for the heroic triangle for a few reasons. It clearly represents an opportunity for growth, and one that the franchise seizes on.
At the end of the episode, Spock and McCoy share a “lie” to their captain. He asks if they watched his final orders. They lie, and say that there was not time to view Kirk's video will during the crisis.
Think about what that means for just a moment.
You don’t share a lie with someone you don’t trust, or don’t like. That Spock and McCoy join together to spin this untruth to their captain, friend, and superior officer suggests that they have attained a new plateau of trust or comfort with one another. Despite everything that Spock and McCoy went through, they have found a way to work together, to co-exist, in “The Tholian Web,” without the peace-maker presence of Kirk.
That’s a big deal, and a big step for their friendship.
We have seen in previous Spock/McCoy moments (in episodes such as “The Trouble with Tribbles,” “The Immunity Syndrome” and “Bread of Circuses”) that when left alone together, away from Jim's presence, these two officers battle.
They snipe.
They zing each other with harsh witticisms.
Here, they get past that stage, for the first time, and so one might make the argument that “The Tholian Web” represents an important aspect of the Spock/McCoy friendship. Eventually, McCoy will tell Spock that he “never ceases” to amaze him (Star Trek V: The final Frontier [1989]) but that’s a sentiment that it is difficult to imagine Bones voicing in the trenches of the first, second, or early third season of Star Trek.
One must wonder if losing Jim, and facing this crisis together, forged a connection between the two men that built the friendship we saw by the time of the motion pictures.
I will state this another way, one more in keeping with concepts of the episode. From a certain perspective, "The Tholian Web" is about putting aside the "ghost" of Captain Kirk.
Crew members keep seeing the missing captain and McCoy wonders if this is so because the officers have lost faith in Spock.  But McCoy feels guilty about giving his loyalty to a new captain. and Spock feels guilty and responsible, as well, for what has occurred to Kirk.
Then, Spock and McCoy exercise that "ghost" -- that haunting spirit -- by conducting a funeral service of sorts; by watching his last will.
It's as if, in their minds, following this viewing, Kirk can finally rest. His last orders have been issued, and Spock and McCoy can move forward to the next step. That next step, in this case, actually involves his rescue.  But they had to move past "the ghost" of Captain Kirk that was paralyzing them, that was locking them in their cycle of grief and anger. 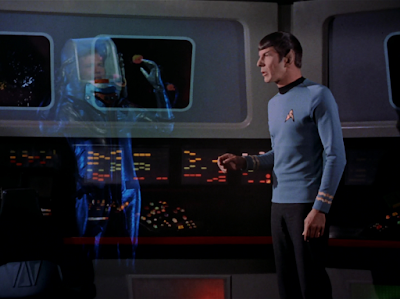 The question, of course, arises: why lie to Captain Kirk during the episode's final scene? His last orders proved incredibly helpful to Spock and Bones. Why shouldn’t he know this?
Here again, Spock and McCoy have realized they have something in common. They don’t want to appear weak before their captain. They would rather lie -- putting aside their differences in the process -- than acknowledge that they were lost without him, and that his guidance was very much needed.
Beyond this examination of the triumvirate, and particularly Spock and McCoy, “The Tholian Web” is notable for adding a fascinating new, non-humanoid (non-mammalian…) alien race to the catalog: the Tholians. 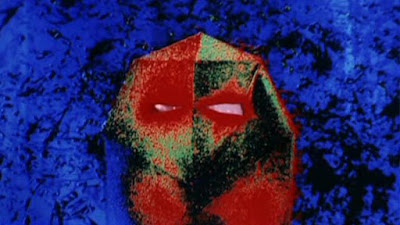 Tholians are (apparently) crystalline in nature, known to be punctual, and evidence a technology far different from the other races we have met so far in the Alpha Quadrant (Romulan, Klingon, Gorn).
They spin their “webs” around enemy starships, and their (Emmy-Award nominated) space toils make for dynamic and unforgettable visuals. 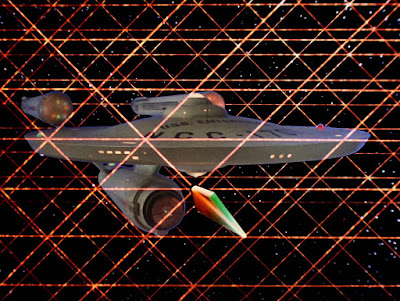 In a very real sense, Spock is “trapped” in a web in this episode. He must battle the crew, rescue the captain, defeat the interphase insanity (as it applies to the Enterprise crew), negotiate with an alien race, and keep his feelings of loss and grief in check. This is a tangled web, indeed, and it’s rewarding how "The Tholian Web" also gives him a literal (energy) web to navigate.
The Tholians would return to Star Trek (at least in passing), in the second season episode of Star Trek: The Next Generation (1987-1994): “The Icarus Factor.”  And the U.S.S. Defiant, would also come back to haunt canon, appearing in the two part Enterprise (2001-2005) episode “In a Mirror, Darkly.” 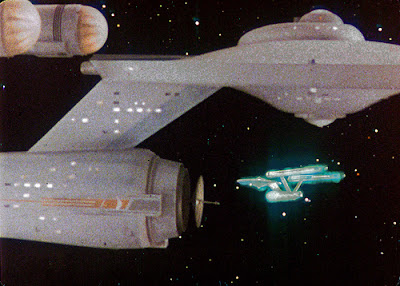 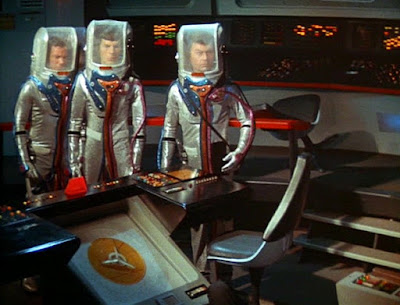 “The Tholian Web” is notable as well for granting audiences a first look at Starfleet space suits, which are very distinctive (and form fitting...), as well as Uhura’s quarters.
In fact, Nichelle Nichols’ Uhura has a good, supporting role in this episode; one that showcases her humanity (and loyalty) well. Nyota’s colorful, distinctive quarters go a long way towards the same goal, reminding us of the character's individuality. After the first season, we rarely get to see Uhura during off-duty hours, so those moments here help make the episode a special and memorable one.
In short, "The Tholian Web" features great character moments for Spock, McCoy, and Uhura, introduces memorable new aliens and equipment, and dramatizes an emotional story of Kirk's "ghost" wherein form reflects (emotional) content. It is an episode that hits on all thrusters, as Bones might say.
at September 09, 2022