Stardate 3619.2
While a landing party scans for rare minerals on a planet surface, a strange alien nemesis from Captain Kirk’s (William Shatner) past attacks. It is a gaseous organism or cloud, composed of the ultra-rare substance dikironium.
Eleven years earlier, the starship Farragut encountered this unusual life form on the other side of the galaxy, and the encounter resulted in the death of many crewmen, including Captain Garrovick. All the victims had their red blood cells drained of hemoglobin by the alien.
Kirk was a young lieutenant aboard the Farragut during the incident, and hesitated to fire phasers before the attack. Ever since, he has blamed himself for the death of his captain and crewmates. He has blamed himself for his moment of hesitation; fearing that it cost lives.
Obsessed, Kirk makes hunting the creature a priority, despite the fact that the Enterprise is carrying medical supplies that are badly needed for Theta VII, and bound for an important rendezvous with the starship Yorktown.
Meanwhile, Ensign Garrovick (Stephen Brooks) is stationed aboard the Enterprise, and when he fails to kill the creature with his phaser, he blames himself, much as Kirk has done.
When the alien vampire cloud heads to Tycho IV -- possible to reproduce -- Kirk and Garrovick attempt to destroy it with an anti-matter bomb. 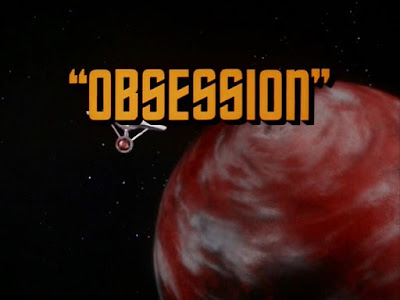 Buoyed by a tense finale, “Obsession” is a solid episode of Star Trek (1966-1969’s) second season, even though it falls into a pattern seen very commonly during this group of episodes.
Specifically, the Enterprise must intervene to stop a galaxy-threatening menace
This formula might seem familiar to you.
The menaces encountered during this span are “cosmic” ones, meaning that they don’t just threaten the ship, or a planet, or a solar system, but whole swaths of civilized space.
In the second season, the Enterprise stops such a menace in the best of these episodes, “The Doomsday Machine,” but also engages (and stops them) in “The Changeling” (Nomad) and here in “Obsession.”   Later, another such menace attacks in "The Immunity Syndrome." 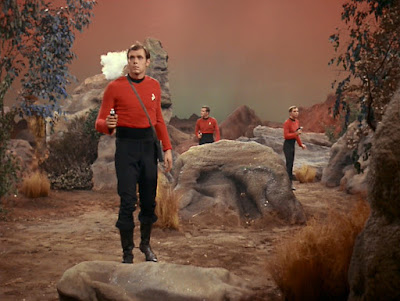 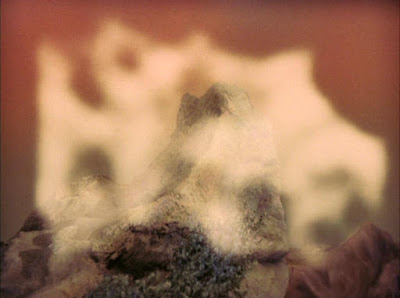 Specifically, the vampire cloud featured in this tale is on the verge of initiating reproduction, spreading out across the galaxy, sucking the life from all red blooded beings, ostensibly.
For a personal story -- one that is really about Kirk’s sense of guilt over something that was never his fault -- this “galactic” canvas is simply unnecessary.  Actually, it's counter-productive from a character development standpoint.
The creature is a menace, it seems, to Kirk’s self-esteem, his sense of self.  It doesn’t need to be a threat to ALL HUMAN LIFE for the episode to work.
Also, and quite unfortunately, this episode goes out of its way to redeem Kirk when it is not necessary to do so.
Consider: Kirk punishes Garrovick unnecessarily, delays a rendezvous with another starship, and imperils the safety of a distant world all on a hunch about this creature.
Well, lo and behold, the episode vindicates Kirk's impulsive choices in the end, by revealing that the life form is on the verge of becoming a galactic threat.  So Kirk’s stubbornness and reckless command choices are all revealed to be completely valid.
All's well that ends well, right?
Yet the title of the episode is “Obsession,” and that term may be defined as a preoccupation that continually intrudes on the mind. In other words, obsession is a craze, a compulsion, a mania.
An obsession is generally not considered a good state of mind, and an obsession usually boasts negative consequences.
“Obsession” is smart enough to establish the consequences of Kirk’s behavior (a planet in jeopardy, a disease out of control, a starship idling on standby waiting for a rendezvous, a young man’s ego crushed) but then permits him to play the hero when things turn out okay.
When one thinks of obsession, the great literary work Moby Dick comes immediately to mind.  Consider that on at least two occasions in Star Trek lore, that Melville classic is  directly referenced.
Khan (Ricardo Montalban), for example, is obsessed with Kirk in The Wrath of Khan (1982). He dies trying to execute his revenge, leading his people, in the process, to death and disaster.
In First Contact (1996), Captain Jean-Luc Picard (Patrick Stewart) is obsessed with the destruction of the Borg, but, in the end, recognizes his obsession, and pulls back to a more responsible decision -making stance (choose to self-destruct the Enterprise and evacuate his crew to safety). Picard realizes that obsession has transformed him into an Ahab-type personality, to the detriment of all those loyal to him.
Here, Kirk never has that reckoning.
Instead, the episode asks us to consider the idea that Kirk was right to do all the things he did, because the ends justified the means. The creature was going to reproduce, become a cosmic menace, and thus had to be stopped.
So Kirk’s obsession -- even though he didn’t know any of that information -- was justified.
A more thoughtful narrative would see Kirk realizing, finally, that he was willing to sacrifice too much to settle an old score, to rectify a (perceived) mistake from his youth.
As I see it, there are two opportunities for Kirk to grow in “Obsession,” and two opportunities for the audience to gain a better appreciation of the character.
The episode handles one opportunity masterfully, and one poorly.
In the first case, Kirk realizes -- as he teaches Garrovick to go through the same thing -- that it is natural to feel fear, and freeze in the presence of something alien.  Kirk froze aboard the Farragut, but his actions made no difference, after all. He hesitated for a few seconds, as any of us would in the same scenario.  There should be no shame or guilt from this. Kirk was, and is, human. 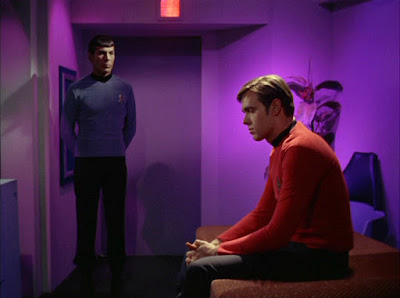 As far as the second opportunity goes, it is squandered. Kirk does not recognize his obsession. and contend with the fall-out from it.
He is willing to commit everything (his starship, his crew, another starship, a planet’s ENTIRE population...) to resolve his personal obsession.
One can argue, I suppose, that Kirk's obsession grows, in part, from his ability to sense the thoughts/emotions of the creature on some basic level.  But even that is a weak argument.  Kirk should certainly apologize to his command crew for his behavior -- or at least his unnecessarily brusque manner -- during this incident.
But importantly, Kirk doesn’t learn about himself here, that he too is vulnerable to irrational obsessions, and that it nearly costs a lot of people everything.
So thematically, “Obsession” is not entirely effective, I would assess. The writing misses the bigger story.
Again, I am reminded of A Next Generation (1987-1994) story, “Silicon Avatar.” It too concerns a space-going entity that murders people: the Crystalline Entity.. A character aboard the Enterprise, a scientist, has been obsessed with it for decades, since it killed her son. She kills the dangerous out of spite and vengeance, but at least, in the last act, is held to account for her actions.  She realizes that the reasons she behaved the way she did were not really valid.  She committed murder for herself, for her own satisfaction, not for anyone else.
To restate the point: Kirk has no such reckoning about obsession here.
Still, I do enjoy “Obsession” for a number of reasons. 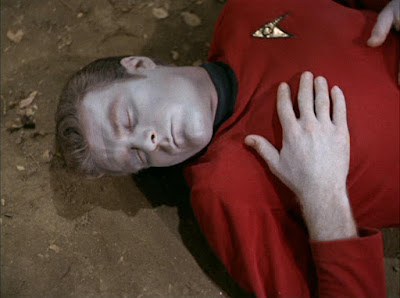 For example, I love the concept of a blood sucking alien (see: It! The Terror from Beyond Space.) I also appreciate  learning something of Kirk’s early Starfleet career.  I also believe that the denouement, with the monster sucking up the bait -- a vat of blood -- works very effectively in creating and maintaining tension. 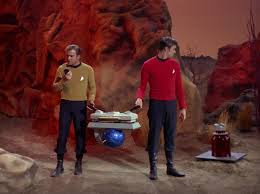