Breakaway Week: "Mission of the Darians" 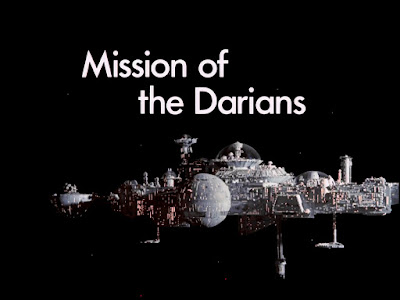 Late during Space:1999 Year One, author and script-editor Johnny Byrne penned a memorable entry called "Mission of the Darians," the tale of the intrepid Alphans rendering help and assistance to a damaged space ark from the planet Daria.
What Commander Koenig (Martin Landau) and his rescue team discover on the colossal, nearly-destroyed spaceship, however, is a real horror. Because of a nuclear accident on board the Ark generations earlier, the Darians have splintered into two societies, two classes.
Existing on one level of the damaged ship are primitive, mutated Darians, ones who have no technology, and worship a deity called "Neman." 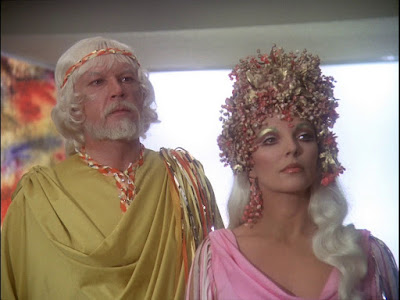 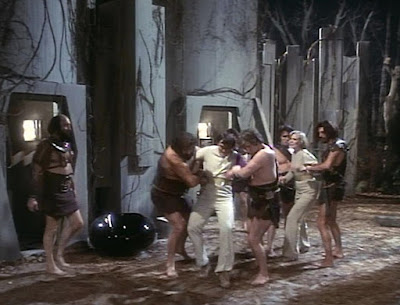 As Johnny Byrne noted on more than one occasion, the creative impetus for "Mission of the Darians" came from a real life, disco-decade story about human nature...and survival.
On October 13, 1972, Uruguayan Air Force Flight 571 crashed in the inhospitable Andes mountains on the way to Santiago, Chile.
Forty-five rugby team players were on board the doomed flight. Twelve people died in the crash, and another five expired from injuries sustained in the accident. With no medical supplies, no food, and no immediate possibility of help, the survivors resorted to cannibalism, to eating the flesh of their dead comrades.
On December 23, 1972, sixteen survivors were rescued from Flight 571, suffering from acute frost-bite, dehydration, malnutrition and altitude sickness. Their harrowing story was related in the best-seller, Alive: The Story of the Andes Survivors (1974; J.B. Lippincott). Johnny Byrne later told TV Zone magazine, in relation to "Mission of the Darians" that "The Andean plane crash had happened, and I was struck by the fact that people had eaten each other to live." (David Richardson. TV Zone, Issue # 54: "Writing 1999: Johnny Byrne." Page 10, 1992.).
Later, Byrne informed me an in interview that his goal in crafting "Mission of the Darians" was not to make villains of the story's cannibals (or by extension, those who had resorted to cannibalism here on Earth.)
"They had suffered a catastrophe and were trying to survive, and so the Darians weren't evil," Byrne explained to me. "Cannibalism happens. Flesh is flesh, whether it is human flesh or animal flesh. When I wrote that episode, it had just happened [in the Andes]..."
This idea of desperate times calling for desperate measures goes back to one of Space: 1999's most important and enduring "memes," what The Los Angeles Times' Dick Adler termed "limited options for survival" in a domain where resources are scarce.
The same writer also noted that where Star Trek had been "recklessly liberal," Space: 1999 was far more "realistic" in approach.
When I read Byrne this particular quote, he approved of Adler's observation, calling it "astute." "Space:1999 represents a very definite shift from the 1960s to the 1970s," Byrne elaborated. "It wasn't a hippie dream. It was the wake-up after the dream."
In Exploring Space:1999 I note that not one of the alien cultures encountered by the Alphans in Year One are technologically less advanced than the turn-of-the-century Alphans. As "advanced" peoples, these alien cultures thus prove examples (or teachers) for the humans of Alpha to either emulate or reject.
For instance, In "The Guardian of Piri," Koenig rejects the Pirian manner of "perfection" because it robs humanity of its impetus to achieve.
In "Missing Link," Koenig likewise rejects the Zennite way of life because it values intellect entirely over emotions, and Koenig still believes it is "more important to feel" than to dispassionately reason.
In Byrne's "Voyager's Return," the Alphans reject a society that has found purpose only in vengeance, the Sidons.
And in "The Last Enemy," the Alphans encounter two humanoid races that have fallen into a state of everlasting war, and reject that outcome as well.
If, as viewers, we are to believe that the Alphans are, perhaps, being "guided" to a particular destiny (as Byrne's Year One denouement, "The Testament of Arkadia" indicates) then these particular planetary stops (Piri, Delta, Zenno, etc.) along the way are, essentially, object lessons for a species that seeks a second chance in space after the destruction of the Earth's environment/civilization following the premiere episode, "Breakaway."
In "Mission of the Darians," the Alphans receive another object lesson about survival in outer space. In particular, they are confronted with a terrible "what if" scenario that mirrors, in many ways, their own possible future.
Without resources, and facing a long trip to a destination planet or "home," the humanoid Darians have fed on themselves, on their people, and on their people's hopes. They've even fed on their people's spiritual beliefs to assure continued survival. This "what if" situation is put into explicit perspective for John Koenig by a final question from Alan Carter.
The pilot asks his commander: "If the same thing happened on Alpha, would you have chosen differently?"
Notably, Koenig doesn't answer the question directly. "Remind me to tell you sometime," he quips, deflecting the query.
I asked Byrne specifically about this exchange, and he told me that Koenig's deliberate non-answer is particularly important. Koenig could not have chosen differently, Byrne explained, because ultimately survival is the name of the game for mankind. Even the humane John Koenig, -- if trapped in a desperate situation -- would act...desperately.
What makes "Mission of the Darians" such a powerful and enduring episode of this 1970s series, I submit, is that Byrne offered a very clever space-age parallel for the Andes story, on virtually all fronts. For instance, the survivors of the plane crash who resorted to cannibalism sometimes likened the process of eating the dead to Christianity's sacred "Holy Communion."
Likewise, Byrne's fictional Darian society -- which uses a "God" Neman and angels (men in space suits) to abduct healthy, non-contaminated members of the society as food stuffs and replacement "parts" -- incorporates this spiritual, religious angle in its narrative; though in an entirely futuristic/space-age setting.
Byrne also inventively and imaginatively takes the idea of "cannibalism" to the next level here. In "Mission of the Darians" cannibalism is not just eating the dead but harnessing the dead for personal (and species) immortality; and in a very real sense, feeding on the "hopes" and "dreams" of a people in the process. Cannibalism in "Mission of the Darians" is thus literal and metaphorical.
A very strong example of the long-lived "space ark" sub-genre of science fiction Space:1999's "Mission of the Darians" is also distinguishable as one of the program's most lavishly-designed and executed stories. The episode features impressive miniatures, gorgeous matte-paintings of the S.S. Daria, and several new live-action sets.
Byrne also remembered the episode's production values as "simply astounding," and credited director Ray Austin for his visualization of the narrative. 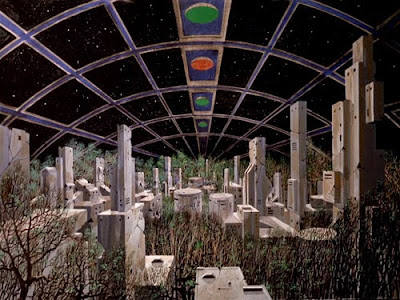 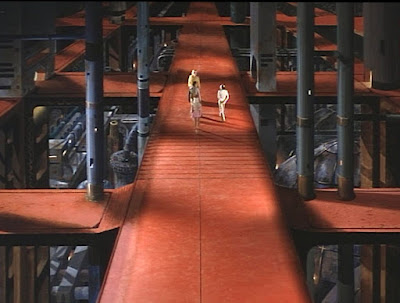 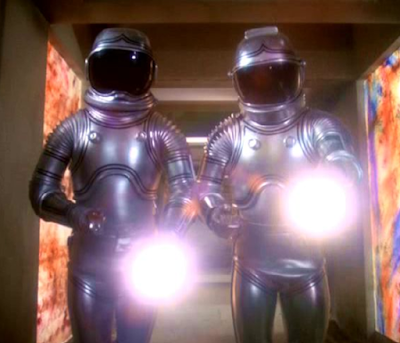 "Just the way it played out, I was amazed how one three-minute sequence featuring Barbara Bain and the Darian 'vetting' procedure so completely explained the bizarre food-chain of the devastated environment," Byrne reported.
at September 13, 2022