Star Trek: "Spectre of the Gun"

Stardate 4385.3
The U.S.S. Enterprise is sent to the territory of the xenophobic Melkotians to attempt to make peaceful contact with the mysterious race. Captain Kirk (William Shatner) ignores a warning buoy and takes the vessel into Melkotian space.
After beaming down to a Melkotian planet, however, Kirk and his landing party -- which consists of Mr. Spock (Leonard Nimoy), Dr. McCoy (De Forest Kelley), Mr. Scott (James Doohan) and Mr. Chekov (Walter Koenig) -- confront a Melkotian who plans to terminate the intruders using their own primitive thoughts.
In particular, the thoughts of Captain Kirk will be the “pattern” for their deaths.
In a flash, the Enterprise landing party finds itself trapped in a bizarre, half-formed recreation of Tombstone, Arizona, circa October 26, 1881, the day of the gunfight at the OK Corral.  This is a facet of Kirk’s family background and history: The Old West.
Worse, all the denizens of this world see Kirk and his team not as Starfleet officers, but as a criminal gang of the day: the Clantons. And, unfortunately, history records that Wyatt Earp and his brothers killed the Clantons that very day.
This is a fate that seems inescapable. To wit: Kirk attempts negotiation with the Earps, and fails. He attempts to leave the town with his crew, only to be repelled by a force field at the town border. He even attempts to seek the aid of a local lawman, with no positive results.
Soon, one of the Earp brothers murders Chekov in cold blood, and this tragedy gives Spock a valuable clue.  Chekov’s “character,” Billy Claiborne, survived the OK Corral combat, so it is possible that history can be changed.
Using his Vulcan mental abilities, Spock is able to pierce the powerful Melkotian illusion with the power of his mind, so he and his shipmates will be prepared for the gunfight at the OK Corral. 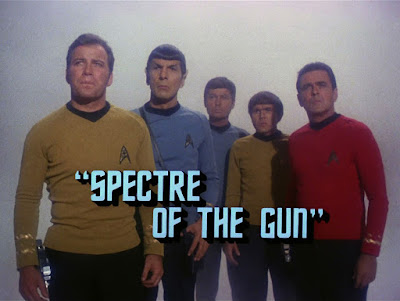 I know my view about this Star Trek episode is not a popular one, but conventional wisdom be damned!
“Spectre of the Gun” is one of my all-time favorite Star Trek (1966-1969) episodes, from any season. I also consider it one of the absolute best installments of the third season canon.
The episode is widely disliked by some Trek scholars and fans for two reasons, both of which I’ll explain below.
I fully understand both reasons, even if I don’t agree with them.
The first reason involves TV history, and the nature of television in the 1960’s. This was the age of Gunsmoke (1955-1975), Bonanza (1959-1973) and other popular Westerns. In short, Westerns were everywhere, and they were the norm.  You couldn’t turn on the TV to escape them.
And, in fact, Star Trek was even considered a respite for audiences tired of horse operas.
So fans look at a “Western”-themed episode of Star Trek -- a series that was sold to NBC as “Wagon Train to the Stars” -- and see only a sell-out; a bow to popular taste.
The argument goes like this: Instead of telling a “real” Star Trek story, “Spectre of the Gun” gives audiences a half-baked Western, just like everything else on the tube! What a desperate attempt to be popular!
And this also plays into the rampant Fred Freiberger-blaming. “Oh look, he doesn’t understand Star Trek, and he tries to turn it into a Western!” 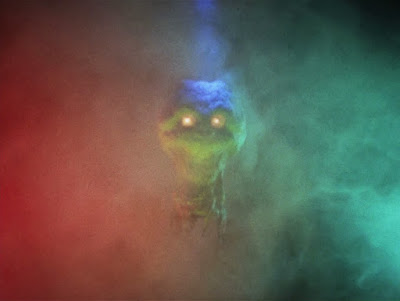 What’s the second argument against “Spectre of the Gun?”
Well, it concerns the episode’s unusual choice in visualization.
The production team did not have the money to create a fully-realized Western street to represent Tombstone, and so constructed only scattered pieces of the town, opting for a surreal approach rather than a realistic one.  Some Star Trek fans consider this approach inadequate, and may also recall that Lost in Space in 1966 used a similar expedient in “West of Mars.”
Basically, this argument is that the episode looks cheap and slapdash. 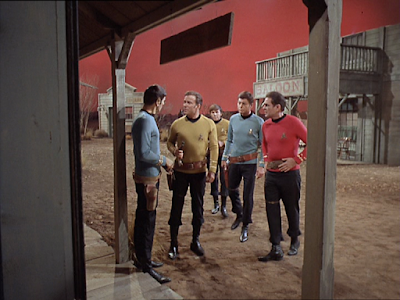 But today, I wish to offer an alternative point-of-view.
I will argue that this episode is actually one of the most visually-accomplished and stylish ventures in the entire Star Trek catalog.  It is true that the town is represented only by pieces of architecture -- some of which float in mid-air -- but such an abstract or surreal visualization is perfectly in keeping with the episode’s themes.
The Melkotians are xenophobes and telepaths who are afraid of aliens. When they probe Kirk’s mind, they don’t glean an accurate, complete picture of the Old West, only bits and pieces.  Whether this is because Kirk’s understanding of the era are spotty, or because Melkotian psionic abilities are limited is entirely inconsequential, and immaterial.  The Melkotians create a town out of Kirk’s half-understood or half-complete memories, and that’s what we see.  Thus, the episode’s form absolutely mirrors its content.
And that form gives us an opportunity to understand, visually, the unreality of this version of Tombstone.  It also permits for highly dramatic moments, such as the ticking down of a clock….floating in mid-air.  A “real” set couldn’t highlight the clock, or the deadline to the gunfight, in the same effective manner. 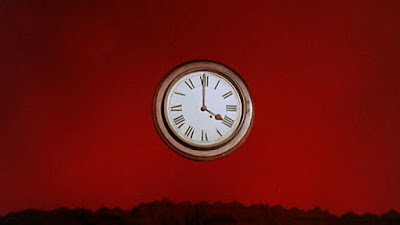 We can see how this visual approach is utilized throughout the episode to give “Spectre of the Gun” a nightmarish quality. Significantly, the Earps and Doc Holiday are visualized not as standard TV cowboys, but rather as soulless automatons or zombies, stuck in a “groove” that will lead them, no matter what, to kill Kirk and company.  They are expressionless beings, shot from low-angles, so as to enhance their menace.
Why is this an effective approach? The Earps are not people. They are not “real” or accurate in an “historical” sense. They are ciphers meant to represent death, created by the Melkotians to murder the Enterprise landing party. They cannot be reasoned with, or bargained with. They are soulless executioners. 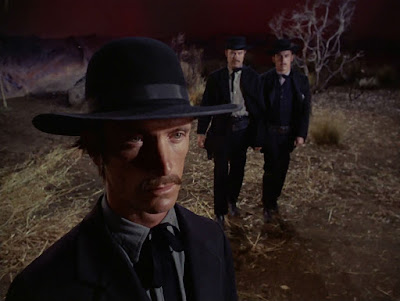 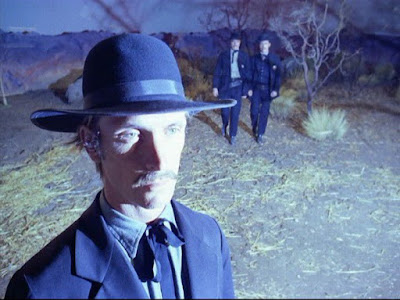 As the Earps march, lock-step towards the OK Corral, the episode provides several expressionistic views of these ghouls, lightning flares reflected on their inexpressive faces.  We see craggy tree branches casting shadows on the canvas sky of the sound stage, and again, we’re asked to reckon with a world that is not real, but unreal. It is a half-formed, bizarre, and dangerous terrain. 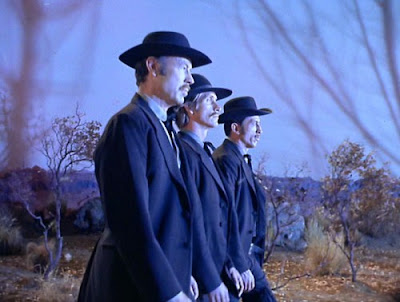 Another terrific shot immediately follows Chekov’s murder. The other landing party members rush to his side, and they appear tiny in the frame. In the foreground on both sides -- visually surrounding them -- are the Earps.
The careful positioning of the Earps in the frame reveals their out-sized menace to Kirk and his friends.  Their positioning on both sides of the frame also carefully limits Kirk and company’s available space in said composition. 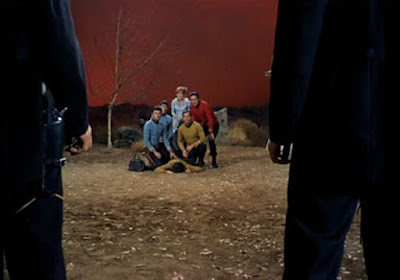 The imagery tells us that our heroes are boxed in.
The expressive nature of the filmmaking here creates an absolutely relentless sense of menace. In Star Trek, well-reasoned plans of escape don’t often fail so dramatically.
Why? Kirk is resourceful, Spock is logical. Scotty can fix anything. And Bones is the voice of human morality. Working in unison, this team can extract itself from virtually any dangerous situation. Here, because the scenario is surreal -- like a dream -- there is no clear path to escape until Spock understands the “unreality” of the situation. Spock’s realization that the Melkotians have bent reality to their liking is the key that allows him to bend reality too.
“Spectre of the Gun’s” overriding theme that the power of the mind ultimately beats out of the power of the gun (or belief in a gun, as the case may be) is a terrific one in terms of Star Trek history and philosophy too. 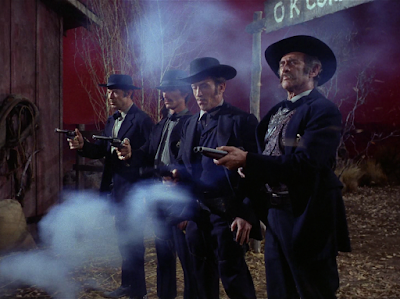 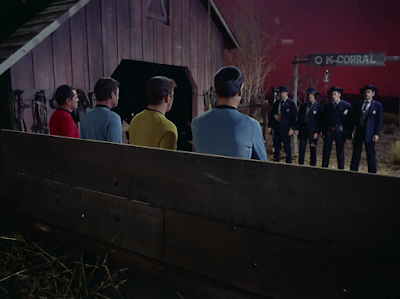 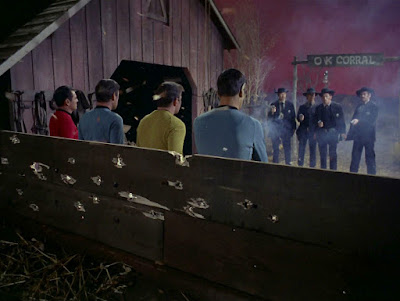 The Melkotians “choose” the gunfight at OK Corral as the setting for Kirk’s execution, but this episode’s events, and Spock’s dedication to reason, prove that man has evolved beyond such violent outcomes by the 23rd century.  A positive outcome can be created not through violence (as it was during the gunfight in 19th century America), but through adherence to facts, science, and logic. Kirk successfully wrestles his violent instincts here -- his anger at Chekov’s murder, namely -- and chooses not to kill. He does not live down to the Melkotian’s expectations of a lowly human.
Buttressed by that strong thematic line, and its daring, unnerving, expressive photography, “Spectre of the Gun” is an entertaining and thoughtful addition to the Star Trek canon, and a real highlight of the final season.
I wish it were more appreciated.
at September 09, 2022