Stardate 4513.3
An android named Norman (Richard Tatru) -- who is masquerading as a crewman -- takes over the Enterprise and sends it into orbit of a distant planet.
On the surface, Captain Kirk (William Shatner) and his landing party encounter criminal and scoundrel Harcourt Fenton Mudd (Roger C. Carmel) there. Harry is now the absolute ruler of a planet of 200,000 humanoid androids, all obligated to obey his every whim.
Mudd plots to bring the Enterprise crew to the surface and steal Kirk’s ship.
Captain Kirk has other plans, however, and along with Spock (Leonard Nimoy), Bones (DeForest Kelley), Uhura (Nichelle Nichols), Scotty (James Doohan) and Chekov (Walter Koenig) launches a campaign of “illogic” against the androids, hoping to short-circuit them. 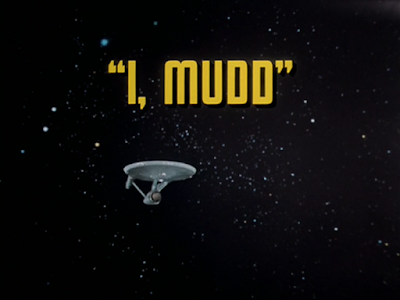 I suppose there’s nothing wrong with getting a little silly now and again, and “I, Mudd” must surely qualify as one of the silliest Star Trek episodes of all-time.
The regular cast members get to cut-loose and have fun here, doing shtick and playing out games of illogic. It’s campy fun, and that means that the tongue is knowingly planted firmly-in-cheek. The actors seem to have a good time with the off-kilter, atypical material. 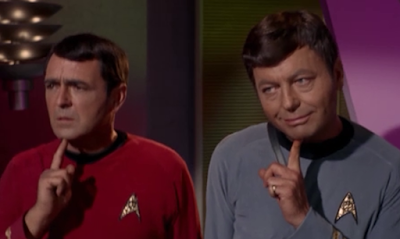 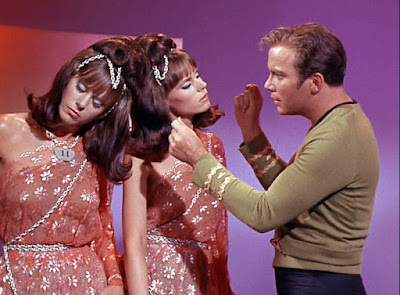 And “I, Mudd” also features a genuinely great character moment for Uhura.
At one point, she appears to betray Captain Kirk so she can benefit from an android body and attain immortality.  The moment is played perfectly by Nichols, and, of course, just a ruse on Uhura’s part.
But it’s a delicious one.
I love the moment wherein Kirk seems to get angry at Uhura, and then embraces her instead.  I wish the original series had more good moments like this one for both Uhura and Nichols. 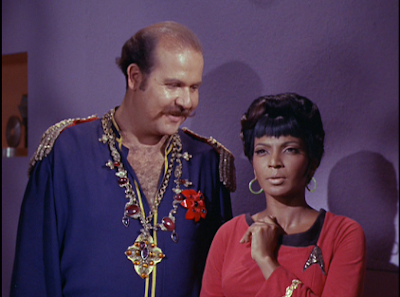 Other than that memorable moment, I would argue that “I, Mudd” is not a great episode of Star Trek.  It’s a lark -- and fine on that basis -- but this surely isn’t one of the top twenty (or top fifty?) episodes I’d recommend to someone setting out to watch the show for the first time today.
For one thing, I’m not a big fan of Harry Mudd, or his style of villainy/comedy. He's over-the-top, two-dimensional, and cartoony.
And I tire of stories in which human emotions are deployed to short circuit confused computers or androids. 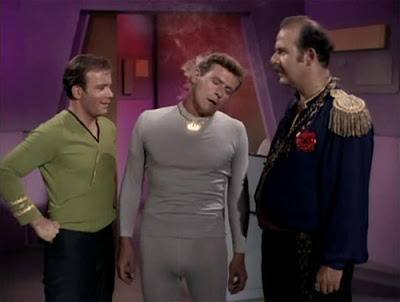 Why do we get so many tales of this type in Star Trek?
I suppose we like to feel that we are superior to machines, and this episode suggests that by acting irrationally, we can actually defeat them. Human nature beats robot nature.
Yet an episode like “By Any Other Name” covers pretty much the same plot (human emotions overpower aliens!) and does it with much funnier moments.  Scotty drinks a Kelvan under the table in that episode, and Kirk gets to seduce an alien beauty. Those moments seem more like character-based jokes than anything we get in “I, Mudd.” 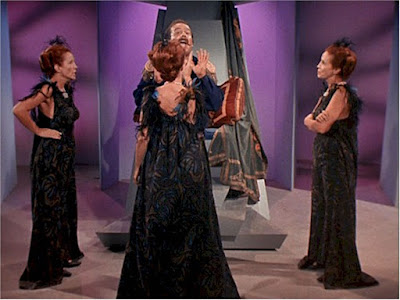 I also hate the sub-plot involving Stella, Harry’s wife. She’s portrayed as a hideous shrew, and a soul-sucking nag, and -- let’s face it -- this portrayal captures the sexism of the 1960s perfectly.  She’s the hectoring, strident wife who has driven her husband to the stars, literally.  Forget the fact that he's a criminal, a scoundrel, and a drunk.  She's the problem, for trying to getting him to act responsibly.
I guess some people might think the portrayal of Stella is amusing, but I agree with her stance: Harry is a pain in the ass.  Funny how we are encouraged to laugh at him and forgive him his crimes, while a life with Stella is considered the equivalent of Hell on Earth.
Some of the episode's visuals also haven't aged well. Norman's belly-button circuit box leaps to mind, as does the sight of smoke emanating from his ears, once he's short-circuited. Devoid of a serious story, a clever plot-line, meaningful social commentary, or tension, "I, Mudd" shows much of the program's "seams." 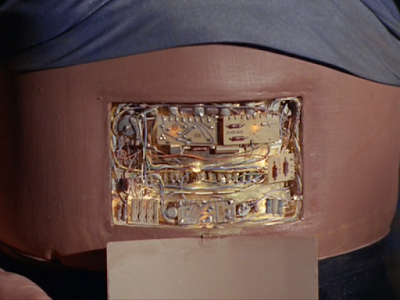 I do often enjoy “funny” Star Trek, particularly the interlude on Earth of 1986 in Star Trek IV: The Voyage Home, or the gangster planet in “A Piece of the Action.”  Typically, however, those stories find laughs from a kind of fish-out-of-water situation.  The crew doesn’t understand another culture, and tries its (inadequate) best to fit in.
"I Mudd” isn’t quite in that league, I would submit.
Oh sure, it’s amusing and light, and mostly harmless..,but also instantly forgettable.
It’s hard for me to decide which Mudd episode I like less, actually. I suppose “Mudd’s Women,” at least, had the benefit of that gritty final act on the Rigel mining colony. There, were saw how pioneers of the 23rd century live.
“I, Mudd” doesn’t have anything nearly as interesting as that, though at least Harry isn’t a pimp in this episode, either.
Occasionally, things on the original Star Trek just get a bit too cartoonish for my tastes, and "I, Mudd" is probably the best example of that tendency.
Finally, I find it intriguing that this episode introduces 200,000 humanoid androids and a world of scientific wonders to theuniverse, but that no Trek spin ever returns to these characters or settings.
Even if "I, Mudd" is funny at times, it's clearly a dead end in the franchise.
at September 07, 2022