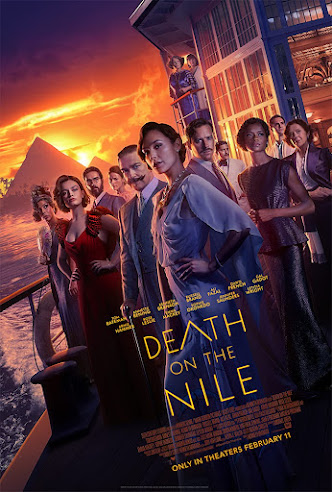 Get a Clue. Death On The Nile Refuses To Invite Armchair Detectives To The Show

Director Kenneth Branagh has adapted an Agatha Christie masterpiece for the second time, following his 2017 remake of Murder On The Orient Express. For Death On The Nile, he has pulled out all his filmic tricks to create a stunning tapestry of production design, costumes, and camera moves. He has assembled a stellar cast, who all perform at their top form. What he has NOT done is direct a murder mystery.  And if he's made that conscious decision, then WHY make a subpar version of a classic whodunit if you have no interest in the audience following the clues by choosing to exclude so many clues?

A young heiress (Gal Gadot) and her new husband (Armie Hammer) recruit master Belgian detective Hercules Poirot (Branagh) to protect them from a scorned past lover of his (Emma MacKey). But as the wealthy and beautiful Linnet Ridgeway travels down the Nile River during her honeymoon, she confides in Poirot that she fears for her life — not only from her friend whose fiancée she stole, but from most members of the wedding party. Poirot must dig through the secrets and lies to discover who has motive enough to kill before it's too late. 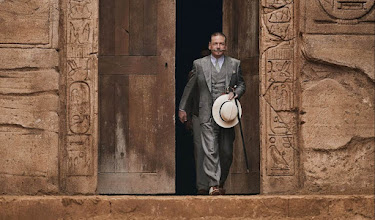 Branagh uses his team from Murder on the Orient — cinematographer Haris Zambarloukos and production designer Jim Clay — to transport the audience first to WWI trenches and then the opulence of '30s Egypt with its ornate 5-star hotels, extravagant river cruise boats, and the treasures along the Nile — The Temples of Abu Simbel, the Sphynx, and the Pyramid of Giza. The costumes by Paco Delgado and JobanJit Singh are gorgeous, particularly those worn by Gadot.

In a cast led by Branagh, Gadot, Hammer, Jennifer Saunders, Dawn French and Annette Benning, the standout is Sophie Okonedo as a blues singer ala Mahalia Jackson. Commanding the screen whenever present, Okonedo plays a character very different from the Salome Otterbourne in the novel and in the '78 film, where Angela Lansbury was delightful as the dipsomaniac writer.  Here Otterbourne is an African American woman living in a CIS White Male world, who exudes dignity even when she's not respected as she deserves to be.

Salome is not the only character reevaluated in the new film. A host of characters are added and refocused, which gives some of the actors more to sink their teeth in, and leaves some with nothing to play. Scriptwriter Michael Green falls into the same traps he had with Orient Express. He turns the film into a character study, which is admirable, but inappropriate for an Agatha Christie mystery. He lifts vital clues, waters down the suspects motives, and even makes the audience care about the victim while removing much of the victim's culpabilities.

Branagh uses the film to pay homage to the great Orson Welles. His high and low angles, deep focuses, sepia photography mixed with one color item, are visually arresting. The opening, taking place on the war fields of Belgium, treats our protagonist with a backstory to fit Branagh's theme that Love is Nature, and Nature is Deadly — hammered home with different animals striking their prey throughout the film — but it does NOTHING for the story.  Welles didn't care about story. In the masterpiece Touch Of Evil, he didn't give a hoot who put a bomb in the old man's car. Touch Of Evil was a losing battle for the soul in one opulent man's body (played winningly by Welles). Alfred Hitchcock also didn't care about plot. He coined the phrase McGuffin, which is the item that the protagonists/antagonists fight for, but of which Hitchcock himself has brushed away as piffle. That's why Orson Welles and Alfred Hitchcock would never have adapted a Christie mystery.

You can't deconstruct Agatha Christie. The components of the plot are essential. That story is a tightly constructed machine. Branagh ripped it all apart and put it back together and many necessary pieces were swept under the rug. It's not a question of reverence to the source, it's that a mystery of this caliber must reveal enough to keep the audience intrigued.  The suspect list must be long, the hints must be truthful, and the audience should be distracted enough to NOT deduce the murderer but should have every clue that could have given them the opportunity to make that discovery themselves. Death On The Nile denies the audience that treat. Most suspects have grievances, not motives. The killer disappears for a good third of the second act. Branagh reveals clues at the conclusion that were not in evidence already, leaving the audience befuddled.

As a meticulously designed, lavish display of art, Death On The Nile is a feast. But as a mystery, Branagh's overindulgence is a detriment of the plot, turning it into Kenneth's folly.