Stardate: 4523.3
The Enterprise is summoned to space station K-7 by Federation Under-Secretary Nilz Baris (William Schallert).
Baris wants the stations storage compartments -- filled with the grain Quadrotriticale – guarded by security staff.  The grain is needed for the development of nearby Sherman’s Planet, which the Klingons are also competing for, under the rules of the Organian Peace Treaty.
Captain Kirk (William Shatner) is reluctant to divert resources to guard the grain, but acquiesces, and offers shore leave to his crew at K-7.
Also aboard the station is rogue trader Cyrano Jones (Stanley Adams), now peddling small furry creatures called Tribbles. Lt. Uhura (Nichelle Nichols) brings one of the tribbles aboard the Enterprise, but soon finds herself caring for a litter of the little beasties.  It turns out they seem to multiply at will.
Before long, a Klingon cruiser captained by Commander Koloth (William Campbell) arrives, requesting shore leave for his men, including the hostile Korax (Michael Pataki).  Koloth’s request is granted, but Scotty (James Doohan) and Chekov (Walter Koenig) end up getting into a bar fight with the Klingons. Afterwards, Kirk must reprimand them for disturbing the peace.
When several tribbles are found dead, after eating the grain, Kirk realizes the grain has been poisoned.  Surprisingly, the tribbles help him discover the identity of the poisoner… 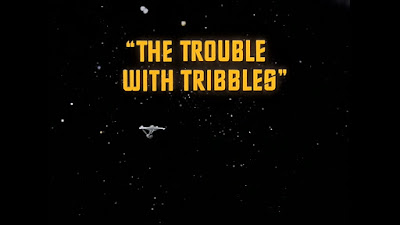 David Gerrold’s Hugo Award nominated “The Trouble with Tribbles” is frequently counted as one of the top ten best episodes of Star Trek (1966-1969).
Certainly, it is one of the ten most memorable and delightful tales, though that honor may land it on a different list. In other words, I might term this a “favorite” episode, while not counting it as one of the ten best.
Maybe one of the 25 best is more like it.
Today, some of the performances transmit as overly theatrical, and the musical score is actually grating at times.
Also, the stunt choreography in the bar fight is terrible (with Walter Koenig very noticeably pulling his punches in at least one shot), and some running gags falling really flat, like Kirk repeating words in clipped tones. “Storage compartments? Storage compartments?”
Finally, the great William Campbell -- who performed so brilliantly as Trelane in “The Squire of Gothos” -- is totally miscast as a Klingon captain, coming across as an effete dandy, and not a cunning military opponent (like John Colicos’ Kor, or even Pataki’s Korax.) 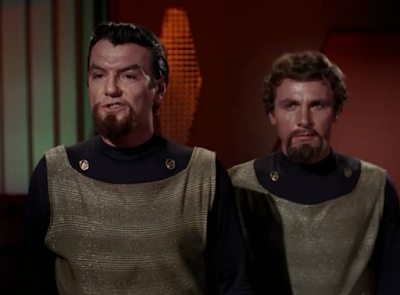 I know it is not popular or correct to make such observations about such a beloved show, but over five decades, some of “The Trouble with Tribbles” flaws seem to have become more apparent. It hasn’t aged as well, perhaps, as some other segments.
Still, such issues can be overlooked because of the episode’s other -- and myriad -- virtues.
For one, Leonard Nimoy is always wonderfully understated in shows such as this one, and I also appreciate the episode’s depiction of Kirk as being constantly irritated and out of sorts, contending with one headache after the other. When the good captain gets a cup of coffee with a tribble in it, for instance, the expression on his face is priceless.
The bit with Scotty defending the Enterprise’s honor, but not Kirk’s, is also delightful, even if his final solution to the tribble crisis -- essentially delivering the tribbles to murder at the hands of the Klingons -- doesn’t sit well with me.
I mean, what do Scotty, Kirk and the others believe the Klingons will do once they discover the tribbles?
Phasers (or disruptors, as the case may be), definitely won’t be set to stun.
One reason for the perennial popularity of this episode may rest with the adorable tribbles themselves. As McCoy notes in the episode: “It’s a human characteristic to love little animals, especially if they’re attractive in some way.” 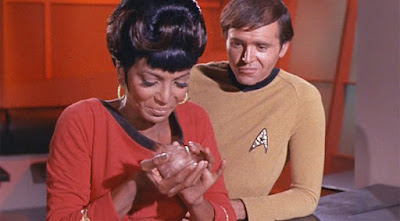 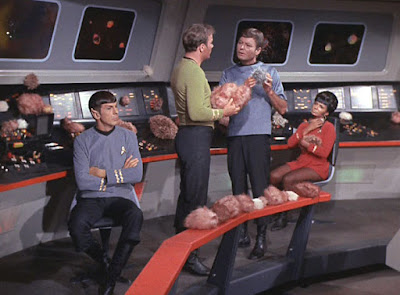 Well, the tribbles are absolutely cuddly, and the episode gains a lot of steam from the idea of something innocent, furry, and small metastasizing into a real threat, one that could cause, quite accidentally, a galactic war.  It is entertaining and fun to watch the tribble threat snowball, growing in size and complexity through the episode’s climax.
A subtext of “The Trouble with Tribbles” seems to involve how to care for animals such as this species, so that they don’t breed out of control, and endanger resources for everyone in the same ecosystem.  Responsible pet ownership -- or responsible stewardship of the environment -- is at the heart of this well-written show. It is a worthy and unique topic to be explored by Star Trek.
The Tribbles, of course, are now an indispensable piece of Star Trek mythology, having appeared here, in The Animated Series (“More Tribbles, More Troubles,”) Star Trek III: The Search for Spock (1984), Deep Space Nine (“Trials and Tribble-ations) and even Star Trek: Intro Darkness (2013).
David Gerrold’s furry creations have more than earned their pop culture immortality, even if some aspects of “The Trouble with Tribbles” have aged a bit.  The humor here (and in shows such as “I, Mudd” and “A Piece of the Action”) seems overly broad.
Still, it was an inventive and original choice to build a Star Trek story around an alien menace with humorous qualities.  I think the story still works as well as it does because of the clever structuring, and narrative twists and turns. Poisoned tribbles, Klingon spies, and the like all contribute to a story that still feels fresh, even if some of the jokes transmit as hoary.
at September 07, 2022